Move over Frontline. The Chin is here.

SBS On Demand gives Australians a reason to snuggle up on their sofas this winter and binge-watch some of the world’s best dramas with the launch of world drama box sets on the streaming service from today.

Every episode will be available to watch on SBS On Demand, anytime, anywhere, and absolutely free.

With titles including sensational Icelandic crime thriller Trapped and UK comedy Raised By Wolves based on the childhood of award-winning journalist Caitlin Moran, SBS On Demand brings the best world dramas to Australian screens this winter with more new content to be added every month.

All dramas premiering on SBS On Demand will be available in full to viewers – that’s every episode of entire seasons available instantly.

David Gwynne Head of SBS On Demand said: “Along with international hits like Trapped, straight off the shores of Iceland, SBS has scoured the globe and hunted out, handpicked and curated the best drama content. We’re thrilled to be bringing Australians some fantastic, exclusive dramas from France, Sweden, Denmark, the UK and much more from 16 June and, it’s absolutely free.”

SBS On Demand features over 5,000 hours of content from across the globe across 25 different platforms and is completely free to all Australians.

Trapped
From the director of critically-acclaimed movie Everest (Baltasar Kormákur), Trapped is a crime thriller reminiscent of an Agatha Christie locked room murder. Set in a small Icelandic town in a deep fjord in the east, Trapped follows the story of town sheriff Andri Ólafsson (Ólafur Darri Ólafsson) as a ferry approaches the town and a dead body is discovered in the harbour.
Watch the full series here: http://www.sbs.com.au/ondemand/program/trapped

The Secret
Celebrated actor James Nesbitt (Babylon, Cold Feet) plays Colin Howell, a respected dentist and pillar of the community, who becomes a killer in partnership with a Sunday school teacher, Hazel Buchanan, played by Genevieve O’Reilly (Episodes, The Honourable Woman). Based on the shocking true story.
http://www.sbs.com.au/ondemand/program/the-secret

Kabul Kitchen
The year is 2005. George Bush is president of the United States, Jacques Chirac is president of France and Jacky (Gilbert Melki) is the manager of the Kabul Kitchen, the only place where expats can party.
http://www.sbs.com.au/ondemand/program/kabul-kitchen

Modus
Brought to you by Emmy Award-winning writers Mai Brostrøm and Peter Thorsboe, Swedish detective thriller Modus follows psychologist and ex-FBI profiler Inger Johanne Vik (Melinda Kinnanman) as she finds herself and her autistic daughter drawn into an investigation surrounding a series of disturbing and brutal deaths.
http://www.sbs.com.au/ondemand/program/modus

Trepalium
Sci-fi lovers are going to be kept at the edge of their seats with this dystopian drama series straight from the screens of France. In a world where jobs are scarce, in a city where only 20 per cent of the population is employed – leaving 80 per cent permanently out of work – a young woman, Izia Kattel (Léonie Simaga), struggles to survive.
http://www.sbs.com.au/ondemand/program/trepalium

SBS has also bought BSkyB drama The Five and Canal+ shows Section Zéro and Baron Noir from StudioCanal for its On Demand service.
It’s obviously good news for viewers that more European drama will be available, but why doesn’t SBS buy Asian dramas for VOD as well? An obvious choice is Descendants of the Sun, a 16-part Korean drama which is a mega hit across Asia.

Directed by Marlind & Stein, the team behind Scandi-noir success The Bridge, Midnight Sun stars French actress Leila Bekhti (The Prophet, All That Glitters), Swedish actor Gustaf Hammarsten (Bruno, The Girl With The Dragon Tattoo), and follows the investigation of the brutal murder of a French citizen in Kiruna, a small Swedish town in the Arctic Circle where the sun never sets. What ensues is the discovery of a ten-year-old secret conspiracy that no one could ever imagine.

Head of SBS On Demand, David Gwynne, said: “The international interest and response to this new thriller has been exceptional and we’re pleased to be able to add this to our growing library of premium content on SBS On Demand – available exclusively and for free.

“Australians have really embraced Scandinavian dramas, a genre SBS has been home to for almost 20 years. Most recently, we’ve had great success bringing premium Scandi-noir titles to Australians first on SBS On Demand, including Trapped and Modus.”

French mystery The Disappearance (available now), explores a family’s breakdown as their 17-year-old daughter goes missing; Brazil’s Magnifica 70 (from Sunday 27 November), starring Simone Spoladore, follows an actress who transforms the life of a man working in the film censorship department of Sao Paulo in the 1970s; Belgian crime thriller Public Enemy (from Thursday 15 December), tells the story of a child murderer’s release back into society; and Finnish revenge drama Black Widows (from Thursday 15 December), follows the lives of three women who plot to murder their husbands.

From late November, people will be required to log in to use the service on desktop, with login on other devices to follow.

Over the coming months, the introduction of a login will enable users to curate their streaming journey by adding their best-loved shows to their favourites list; search programs by language, country, or category; and resume playback from where they left off across multiple devices. Login functionality also enables SBS On Demand to personalise content relevant to individual users, providing them with more of what they love.

Hi Briminator, much appreciated, do you also have these in 480p? My internet is slow. Also look at 480 for Channel 10 if possible. Thank you

Unfortunately, there are no 480p quality streams for these channels. The next step below 576p is 360p.

It’s a bit complicated, so I apologise in advance.

And you can find all the other channels I have found, including all regions of TEN here

SBS has announced the appointment of Abigail Thomas as the General Manager of SBS On Demand.

This new role will oversee the next phase of the development and performance of SBS On Demand which is seeing significant growth, and experienced its highest audiences to date in January 2017.

SBS Managing Director, Michael Ebeid, said: “We’re delighted to have Abigail come on board in this very important and strategic position that will play a key role in our digital future. Abigail brings a wealth of experience in digital innovation that will be invaluable in building on our success to date. We look forward to her joining the team.”

Abigail brings more than 20 years’ experience across digital strategy, product management, research and content, working in the financial and professional services, media and arts sectors, joining SBS from the Commonwealth Bank where she was Head of Mobile Digital Experience, leading the mobile and customer journeys team responsible for mobile innovation on the award winning CommBank app, mobile wallet experiences, as well as other apps.

Prior to Commonwealth Bank, Abigail was a Director at Deloitte Digital where she advised clients on digital, mobile and social media strategy. She also previously led a creative digital team at the Australian Broadcasting Corporation (ABC), developing and launching iView, as well as the ABC’s first mobile and tablet applications. Earlier, she worked in policy and strategy roles for the UK Government on the rollout of digital television in the UK, the regulation of the National Lottery and the funding of museums and galleries.

Abigail Thomas said: “I am thrilled to be joining SBS to lead the continued growth of SBS On Demand. With more content available to Australians than ever before, it’s never been more important to provide access to quality programs from around the world combined with a fantastic user experience. I am excited about being part of its future development.”

Abigail’s role will have a key focus on the next phase of development for SBS On Demand across the SBS network and will report into SBS Chief Content Officer, Helen Kellie. In leading the direction of the service, Abigail will oversee areas including product development, content curation, user experience, customer service, marketing and commercial opportunities for SBS On Demand, working across the organisation to pursue new opportunities, and drive continued improvement and growth.

Abigail commences with SBS at the end of March 2017.

The first episode of Season 3 of Fargo can be seen on SBS on Demand from 10 May.

Anyone aware if SBS has announced anything regarding season 3 of Bosch?

Premieres in Australia exclusively on SBS On Demand from 6 July

The highly anticipated adaptation of acclaimed author Margaret Atwood’s award-winning novel The Handmaid’s Tale, from MGM Television, makes its Australian premiere exclusively on SBS On Demand, with the full series available to stream from Thursday, 6 July.

The 10-part series is the story of life in the dystopia of Gilead, a totalitarian society in what was formerly part of the United States. Facing environmental disasters and a plunging birth-rate, Gilead is ruled by a twisted fundamentalist regime that treats women as property of the state. As one of the few remaining fertile women, Offred (Elisabeth Moss) is a Handmaid in the Commander’s household, one of the caste of women forced into sexual servitude as a last desperate attempt to repopulate a devastated world. In this terrifying society where one wrong word could end her life, Offred navigates between Commanders, their cruel Wives, domestic Marthas, and her fellow Handmaids – where anyone could be a spy for Gilead – with one goal: to survive and find the daughter that was taken from her.

SBS Director of Television and Online Content, Marshall Heald, said: “The Handmaid’s Tale is one of the year’s most eagerly-awaited series’ and sits perfectly alongside SBS On Demand’s premium international and multilingual drama offering. We look forward to bringing Australians the series exclusively in July, available to stream anytime, anywhere and absolutely free.”

“The Handmaid’s Tale has garnered worldwide attention and critical-acclaim, sparking conversation that has led to a high demand for the series. With a commitment to quality and handpicked content, unquestionably, there is no better home for the series in Australia than SBS On Demand,” said Chris Ottinger, President Worldwide Television Distribution and Acquisitions.

The Handmaid’s Tale was renewed for a second season in the US overnight, so depending on reception it may be picked up by SBS as well.

Anyone aware if SBS has announced anything regarding season 3 of Bosch?

It’s available on Amazon Prime Video at the moment so may be a while before SBS give it a run.

SBS OND is giving me the sh*ts lately.

I got some shows with no ads last night.

Titles for SBS On Demand From SBS mid-year presentation

The 2nd season of The Handmaid’s Tale will become available to Australian viewers on April 26, fast-tracked from the US. 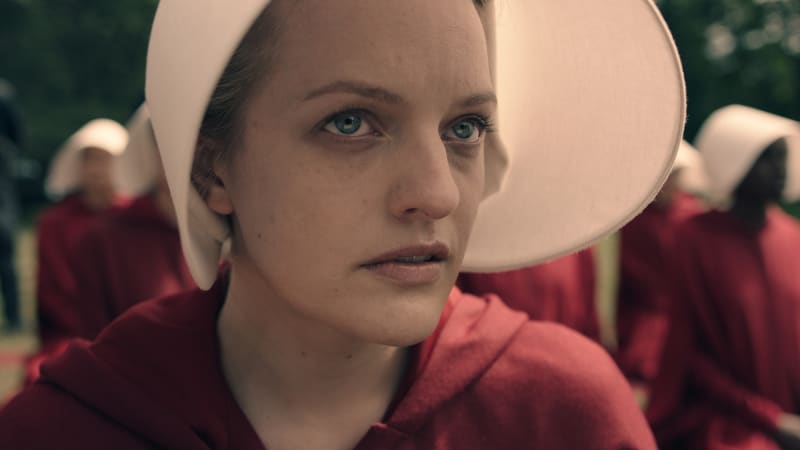