I agree. Talking Lifestyle should’ve had some light music involved.

They did end up having a show with Stevie Jacobs towards the end on a Friday with music. The playlist was brilliant.

MSR just had the problem that sport was too core of an element of the 3AW/2GB formula. If you shifted all sport outside the news to MSR, then they’d probably be on air still, just it’d have taken a huge amount of the share from cannibalising their own listeners.

Absolutely agree and I think it was an absolute disgrace that the Macquarie Radio’s Board sanctioned such an experiment - very costly with a high risk of failure. Brain fart written all over it.

To Data & Commerce’s credit when they set up SEN, it was hardly likely to cannabilise 3MP’s easy music format.

Fascinating graph of 1116 SEN’s history there, thanks for sharing. Really ties in with the anecdotal history here of the station’s performance. Was lucky to survive the mid-2000s with poor shares, no AFL rights and that disastrous foray into Adelaide, but really reached its peak in the late 2000s/early 2010s when they had a well established lineup to compliment the footy on the weekends. I myself was a religious listener of KB’s morning show and Finey in the evening, even continued streaming Finey’s final siren on Sundays after I moved up north. But the loss of some of those key personnel in the Hutchy era seems to have inflicted a knock that hasn’t recovered in the time since…

Basically, it should have been original Smooth style light music, with soft talk. Sure every ad would be for funeral homes and pre-purchased caskets, but that’s I think where the market for that station is - retirees trying to work out what to do each day.

I wonder if that’s close to what they might’ve landed on if they weren’t stalling for so long on selling 2CH… but if the idea was to be almost “pseudo-brokered time” all the time, music would’ve likely also devalued that. Given the mentality from the merged Macquarie Radio was “protect 2GB/3AW/etc at all costs” and to not let 2UE/3EE/4BH go to someone who could restart a talk competitor - it’s not like there would’ve been effort beyond that. Same with MSR; it was never going to be more than half-hearted when the footy is still on 3AW and the Continuous Call on 2GB and 4BC (as @Moe said) - but I suspect that wasn’t the main point. 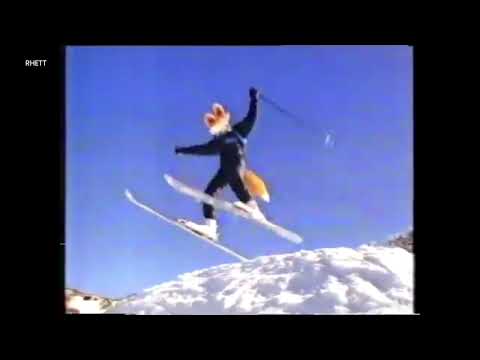 For the more ‘mature’ of us here, I have a question.

JJJ has often been criticised over the years for shunning more ‘mainstream’ content and ignoring mainstream releases from erstwhile ‘JJJ darlings’. However in the 1980s, I have it on good authority that 2JJJ sprinkled mainstream hits (e.g. Michael Jackson) amongst its generally alternative mix. Was this generally the case? Unfortunately ‘Frankster’ hasn’t provided us with any old airchecks as yet.

Today’s JJJ may be going more in that direction; ‘Requestival’ is the obvious example, but I don’t listen at all…

For the more ‘mature’ of us here

More mature as in sensible, or just oldies? lol

I think in the Double J times, on AM they did sprinkle some mainstream music in, but not sure that transferred through with the change to FM & becoming Triple J?

For the more ‘mature’ of us here, I have a question.

JJJ has often been criticised over the years for shunning more ‘mainstream’ content and ignoring mainstream releases from erstwhile ‘JJJ darlings’. However in the 1980s, I have it on good authority that 2JJJ sprinkled mainstream hits (e.g. Michael Jackson) amongst its generally alternative mix. Was this generally the case? Unfortunately ‘Frankster’ hasn’t provided us with any old airchecks as yet.

I can’t speak for the earlier days as I only heard JJJ for the first time in 1989 when it began in Melbourne. I was in the target demographic back then but found it disappointing that JJJ seemed to focus solely on the alternative and not any mainstream. Particularly disappointing as Melbourne had just lost 3XY as a top 40 / dance station and the commercial FMs weren’t really up for it.

Triple J has taken a reasonably fluid view of what they seem to be “mainstream”, especially when it comes to artists/groups who get early airplay on the station. It’s never really been consistently applied either

Some get punted from the playlist as soon as they go mainstream while some continue to get significant play long after. The decision sometimes correlates with a shift in the artists music output, sometimes not

From The Radio Vault, a recording of Victoria Overnight via 3SR Shepparton in August 1991. 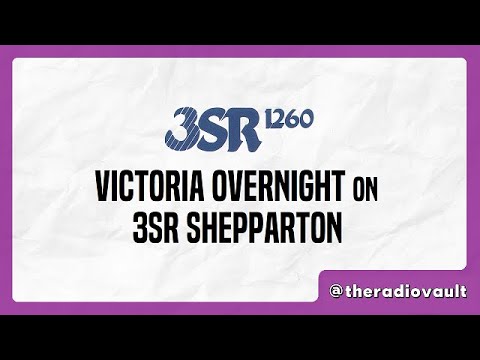 Victoria Overnight was a syndicated program that was heard on 3SR Shepparton, as well as 3GG Warragul & 3BO Bendigo.

Were these names the origin/inspiration for “Australia Overnight”?

There have been some great variations for overnight programming. 2UE and network stations had “New Day Australia”, and the Super Network has “Talk Overnight”.

Were these names the origin/inspiration for “Australia Overnight”? 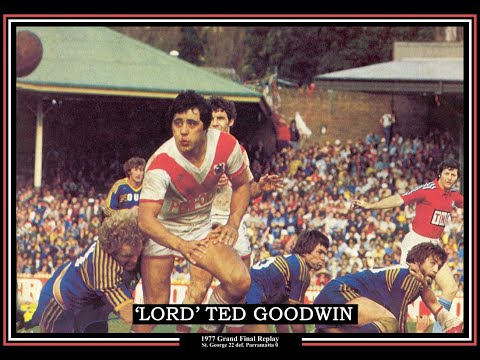 This is gold except I am a Parra fan. Started listening its just Frank it seem on the call. A legend before my time (whilst I was around was too little to be interested in radio)

Some radio goss as reported by Ian Cover in TV Scene, dated 29 January 1983: 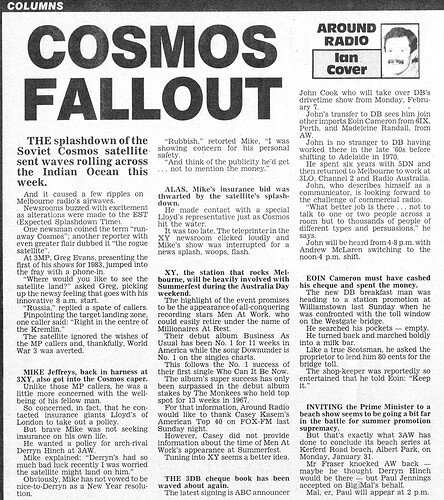 And the radio programs for the week for Melbourne/Geelong. Apologies as the newsprint/colour has not aged well: 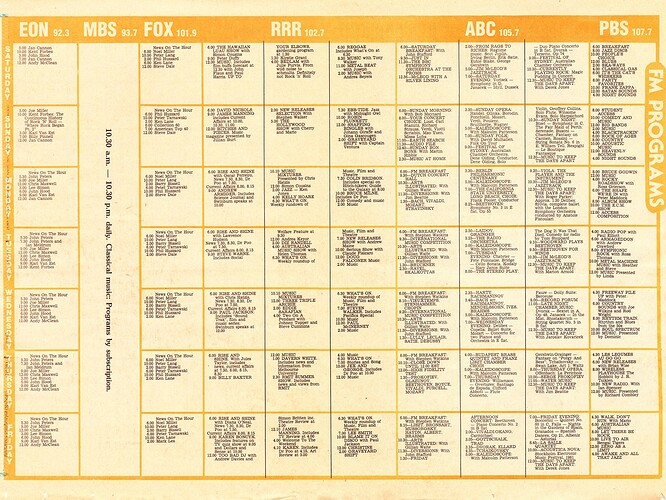 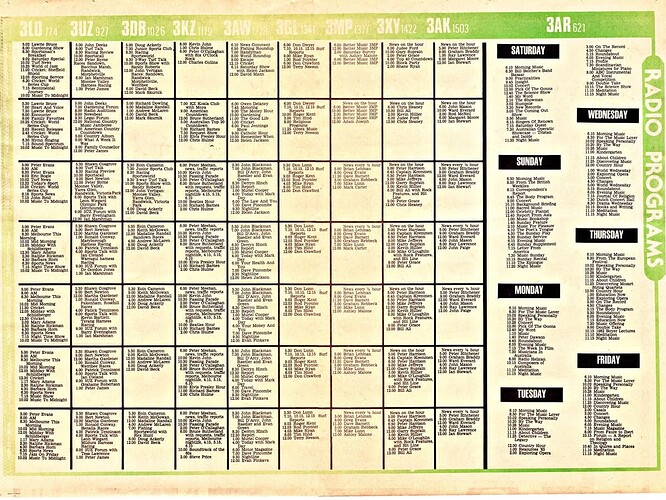 And the radio programs for the week for Melbourne/Geelong. Apologies as the newsprint/colour has not aged well:

I don’t know why PBS was moved to 106.7 rather than to 107.5. PBS’ new frequency came with a new transmitter/location which allowed it to broadcast 24/7 for the first time (its previous transmitter site was causing problems with a nearby hospital’s equipment, apparently, so it could only broadcast after hours on weekdays and longer on weekends, and on low power). The new frequency also came with an increase in power. Maybe logistically it was too difficult to do testing on 107.5 while still broadcasting on 107.7, so it had to have the new transmitter on 106.7? That’s just my guess, I have no intel on what happened, but it seems from what I’ve read that it was a lot more complicated than ABC’s minor move to 105.9.

Moving to a frequency that is not too close to the current one is probably easier to explain to listeners, if it’s just a slightly different frequency, some listeners might still hear it but find it a bit distorted and wonder why and what to do to fix it?

Particularly back then when most radios didn’t have digital display tuning.

The music sounds like Mix 106.5 before the change to Kis ie how the station was formatted one mid 2000s very similar music.