Just a link to the proper pictures of the AR1946 radio from the TechBrands website. The all-black radio in the top 3 images is the production unit.

The second image is of the rear with proper markings for the AM external antenna (not IF out like the pre-production unit). The third image is of the right side which has the fine tuning (slow) step detented thumbwheel.

Owners of the Tecsun PL-390 – is there any way to lock the tuning knob to increment in intervals of 0.1 MHz all the time? It’s annoying with it jumping to 0.01 MHz increments when moving the knob slowly.

No. I don’t think there is … I find that annoying too.

No theres not. It has 100 presets though so a work around that would be to store every .2MHz into the presents and put it on preset mode. That way the tuning knob basically does what you want. I just use the keypad to manually punch in frequency. Some of the numbers don’t always work

Yes, the ‘3’ on the keypad of my Teccy needs a HARD press.
The other ones all work.

Thanks for the replies. It’s too bad they couldn’t have included a fast/slow switch like my Sangean has. I had already had the 0.2 MHz intervals stored in memory.

Hi all,
I’ve had the opportunity to put the Digitech Audio AR-1946 through a fair range of tests and so far it has come up “trumps”. I’ve very pleased with it. The radio is not without it’s quirks though, the muting while tuning which is typical of current DSP radios is annoying making band scanning with the tuning knob onerous if you want to catch that DX station on shortwave. Direct entry of frequencies gets around that but you need to know the frequencies in advance. There is no SSB which is a shame and they’ve dispensed with the useful Airband which was good on the AR-1945. In it’s place, they’ve added DAB+ capabilities. Bit of a waste where I live in Regional NSW but handy for metropolitan listeners.
The radio is extremely sensitive on all bands and considering it has a ridiculously short antenna for SW, is impressive just how good it performs. I’ve connected the 1946 up to a series of PK Loop amplified antennas giving me coverage from 520 Khz to 22 Mhz and it shows no signs of overloading. I managed to do some MWDX and could hear the US (just) on 1580 Khz thanks to it’s 7 bandwidth settings. I haven’t had the opportunity to connect it to an external FM antenna at home yet but I see that there would be no problem with FMDX with this radio. I did, however, try it on an external FM antenna at another enthusiast’s home with impressive results receiving good RDS signals from Orange, 60 kms away.
Avo has had a disappointing result from his initial purchase of the radio resulting in the radio being returned suggesting the typicaly variable QC that is all too common in radios from China at the moment so it is strongly suggested that with any radio purchase, you have the opportunity to try before you buy to avoid disappointment. Luckily mine hasn’t had any of the issues that Avo experienced and as I said before, I’m very happy with it. It’s a keeper for me.
Good DX… Phip.s I’ve also been enjoying the Sangean ATS-803A and it’s clone the Realistic DX-440.

Hi all,
I had the opportunity to assess the capabilities of DAB+ on the 1946 while visiting my son in Sydney near Narellan. Location would be about 50 kms south west from the transmitters and I was surprised at just how good the DAB+ capabilities were on the radio. Audio was excellent and I was able to receive most DAB outlets with only the occasional dropout. Moving the radio closer to a window solved that issue and DAB reception was then rock solid. It was easy to toggle between the scrolling text and ID and the information shown on the display was adequate for general purposes. A big plus here!
I also checked out the FM-RDS capabilities and was happy with the radios performance here. The Sydney outlets were at full signal strength and the RDS performed faultlessly. Another big tick.
One thing I did omit from my previous assessment is that there is no option to adjust the RF Gain or attenuate the incoming signal on any band so there may be a chance to overload on external antennas. Having some form of control would be handy.
I’ve been using this radio a lot and must say I’ve been pleasantly surprised by it’s performance. from my perspective, it’s been a good buy.
Cheers and good DX…… Phil

In a puff of illogical thought processes, I gave my Sensia 200D to my parents and bought another Sangean 909X plus an RCR-9 for my partner (she used to use a Pure One Flow but always had issues with reception quality). Well I have to say the DSP tuner in the RCR-9 is superb, my 909X even more so (seemingly better than the one I bought several years ago). SW is a wash in my location but MW and LW works great within the limitations of the smallish ferrite rod (got a weak Cooma and Wollongong NDB signals last night for example - BTW does anyone know if the SYD NDB on LW has been decommissioned as I hear nothing but get Richmond cleanly and Bankstown OK)

No problem with her locked in WSFM with RDS (although the RDS-CT time is wrong on the tx - I have written to WSFM in a vain attempt that they will correct it. In the meantime I have sync-ed the time with SmoothFM and set it to manual). The analogue clock is a work of art and you can set the backlight to the dullest of glows (I have it on 2 and it is just a faint phosphorous-like glow perfect for someone who hates lights at night). Highly recommend it as a clock radio - Ryda had them on sale this week).

I got the 909X mainly for FM and it is stunning. Even though propagation is not so hot right now, I am getting a constant JJJ on 102.1 and ABC on 106.1 2/10 with the occasional stereo flicker. It eats the Sensia on FM and the SNR seems very very good. I wish it had a manual selectivity selection on FM however as 99.9 SWR does get a little swamped by my local 100.1 HHH but is still quite listenable. Even getting the WS repeater on 99.1 quite listenable…

So lets see how long I can last with out Internet or Digital!

I can’t get the Syd LW beacon either, so it must be QRT. It was on 428 kHz. I note that Richmond (347 kHz) is now CW only without terminal information, and Bankstown (416 kHz) still has terminal info. I think I can get Cooma at night, but it’s CW only.

Others audible at night with terminal info are East Sale (350 kHz), Amberley/Brisbane (359 kHz) and Williamtown/Newcastle (365 kHz). I think Nowra is also on 359- it can be heard mixing with Amberley.

EDIT: This LW reception is with the Tecsun PL-390, using its small internal ferrite.

Here is my FM DX Setup. 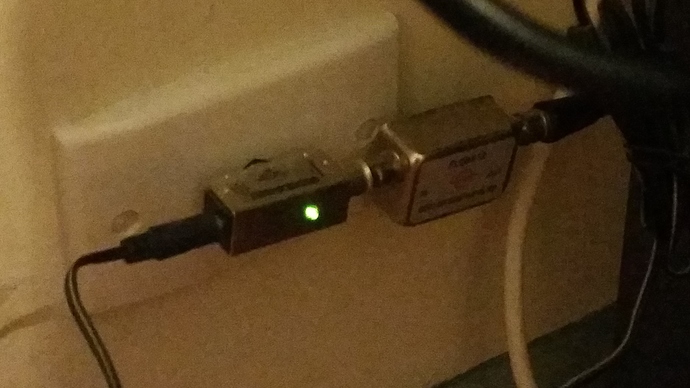 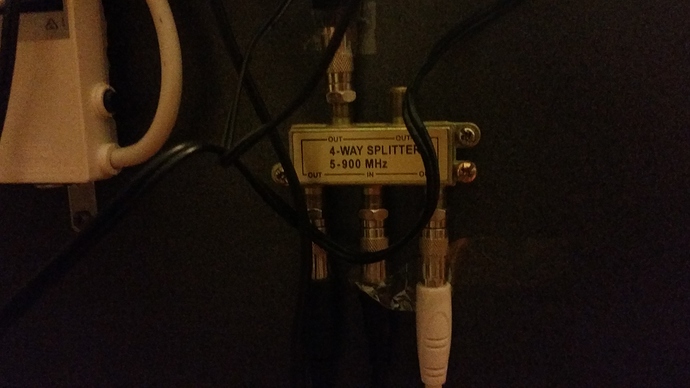 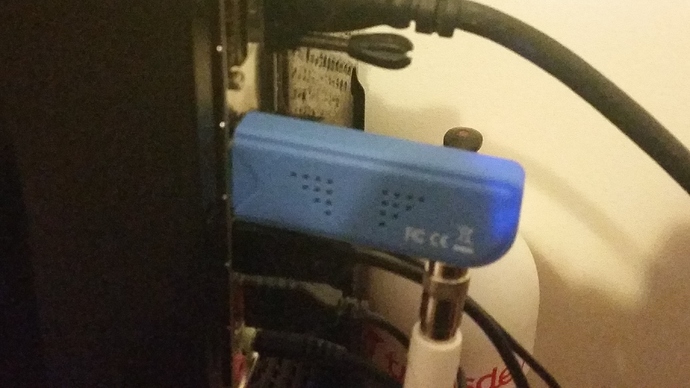 When then it gets pumped into SDR#. 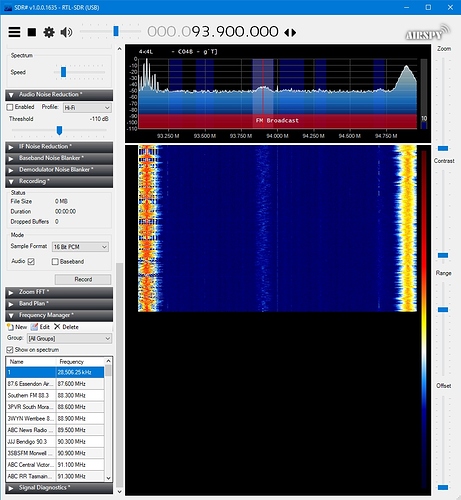 Overall the setup is a bit iffy. It can receive most FM stations but does get overpowered by JOY and SBS Radio.
It also receives Bay 93.9 from Geelong and triple j from Bendigo as well as Local Radio and Classical FM.

Thanks for sharing. The SDR dongles are a great entry level start to the world of SDR VHF/UHF radio reception tech. They are however prone to overload & tad noisy, but great fun for the money. I couldn’t get very good audio from mine on FM.

Have you considering a SDR Play RSP1A if low on funds? Would be a big performance boost for I guess around A$180 delivered & also have wide spectrum coverage.

Have you considering a SDR Play RSP1A if low on funds?

I was looking for a decent cheap SDR such as the SDR Play but forgot about it.

Sounds great tho. The software it uses SDRuno sounds really good with it’s filtering on the RSP1A and the image signals.

The AIRSPYHF+ performs better for $100 more, but only has 768kHz of bandwidth, where as the the SDRPlay RSP1A has 8MHz of bandwidth; thus better for covering more of the FM band.
Many people rave about the Perseus but many $$$$. So many of these SDRs getting about now…

Looks like that by removing the filter, the SDR can now receive KROCK, 3WBC as a whole host of others clearly. At the loss of overload from SBS Radio / 3ZZZ.

Still want to get the SDR tho, but might be able to combinde the inputs to get around 4-8MHz.

Is there a filter in the NooElect Mini? Or is it the SDR# software you are referring to?

Using an external bandpass filter on my Noo Elect didn’t improve the reception of any of my FM stations though, tried it a few days ago.

The problem with the SDR RSP1A compared to the higher end SDR’s is the limited dynamic range, so you could get overloading in high signal areas. Plus the sensitivity isn’t as high as some of the better SDR’s. Still it would be a considerable improvement to the Noo Elec.

I have that exact same blue one and it overheats to the point that you can’t use it.

I bought this radio yesterday

Its essentially the same as the XHDATA D 808 that @Dj_Cazzah just got.

Some good reviews below. 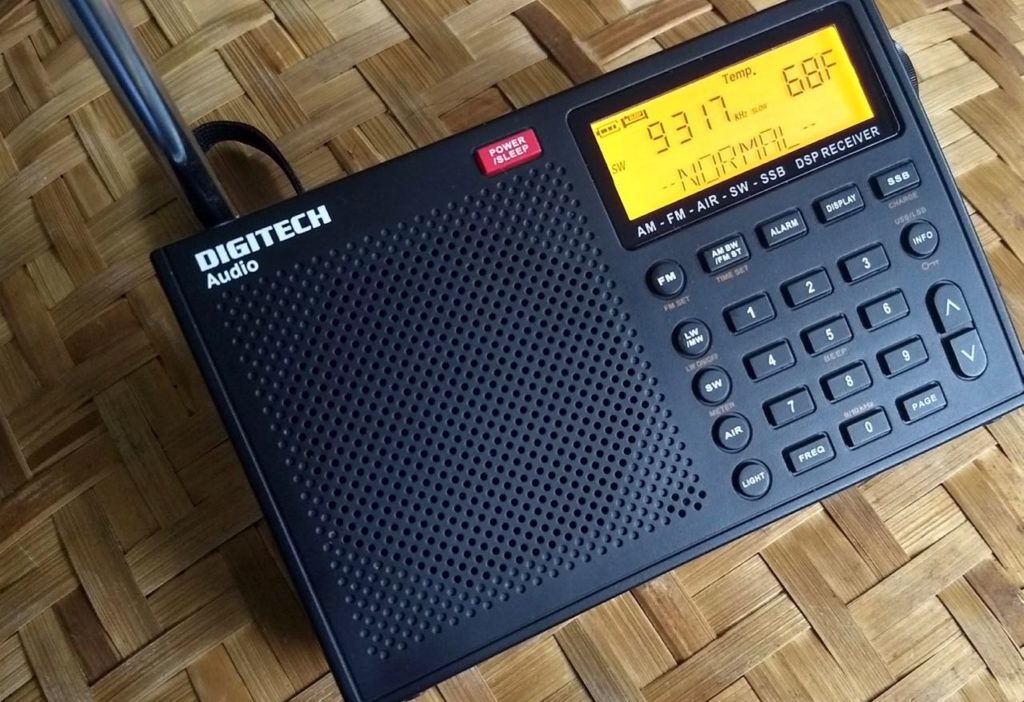 The following review first appeared in the October 2017 issue of The Spectrum Monitor magazine. Earlier this year one of my readers in Australia noted the addition of the Digitech AR-1780 to the pr…

Some comments below are in comparison to my Tecsun radios - the entry level PL310-ET and the PL-880.

As for performance, selectively and sensitivity seem very good, as for whether it’s better than the Tecsun, hard to say just yet, will know more over the next day or so, will post back here later.

But I’m very happy to have been able to buy this locally from a retail outlet.