Discussion of media coverage of Australia, New Zealand, Tonga, and Fiji 17 day royal tour (if any).

Even the announcement of the tour dates was front page news 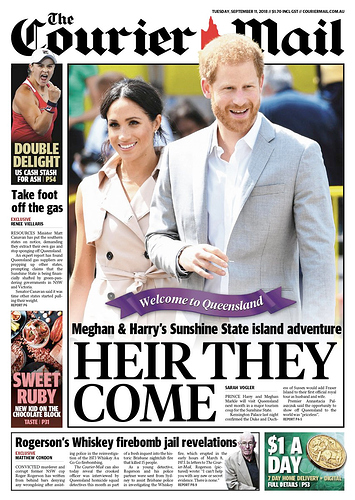 It is front page news on today’s Herald Sun as well. 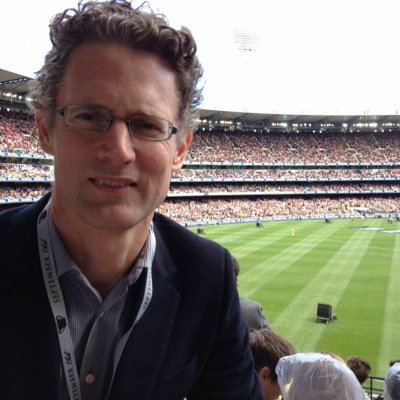 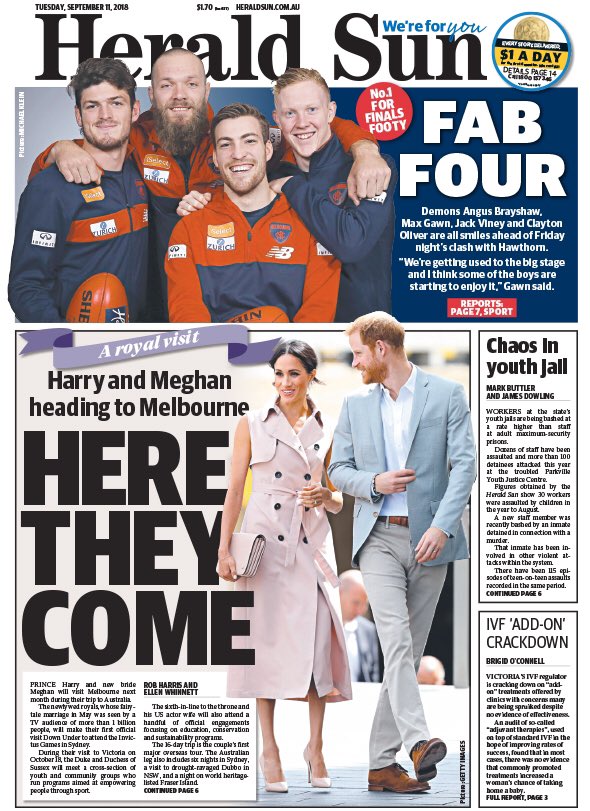 Good to see parochialism is alive & well in Australia.

Where did you get that itinerary that has the dates using the USA format?

About 90% of info in the Media Spy in box is in that format i.e. October 10th etc. Also seems to be preferred by TV stations for promos and watermarks. I adjust the media releases to the Australian Govt standard when posting program times, premiere dates etc.

I think the Courier Mail headline is better with the use of ‘heir’.

Did all markets get the bobble heads in Nine’s itinerary report? 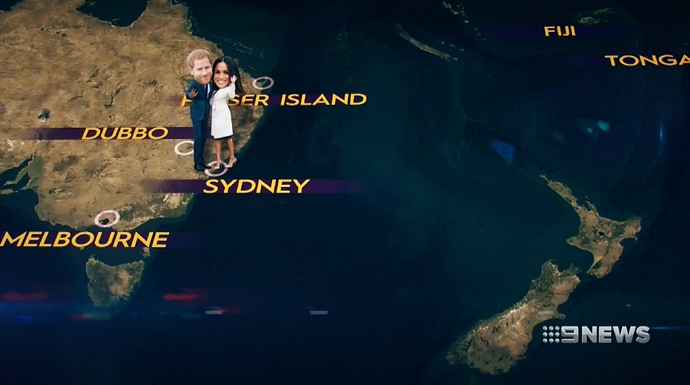 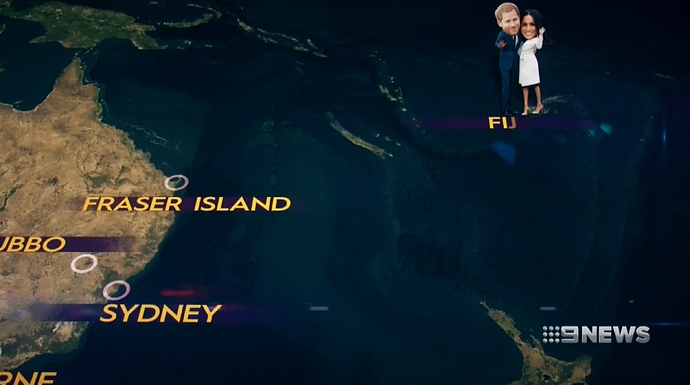 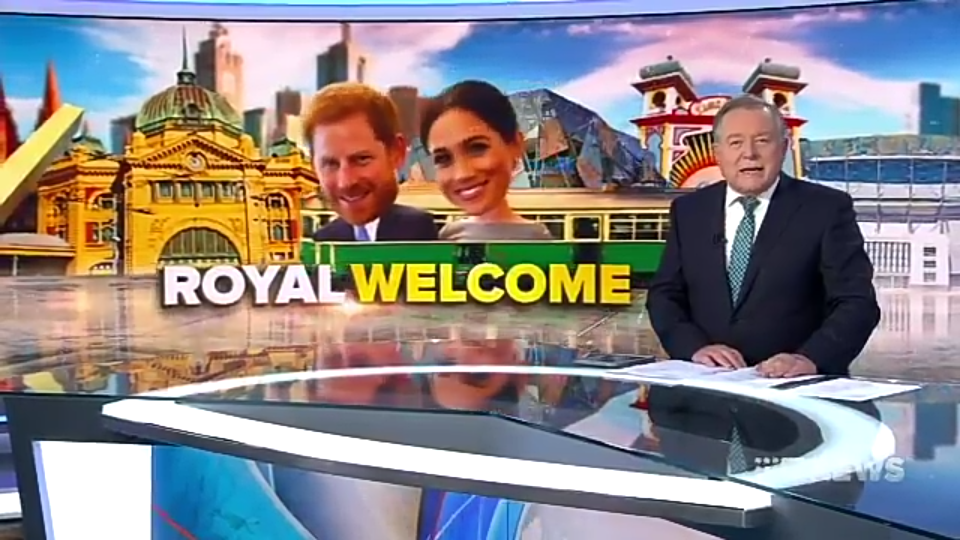 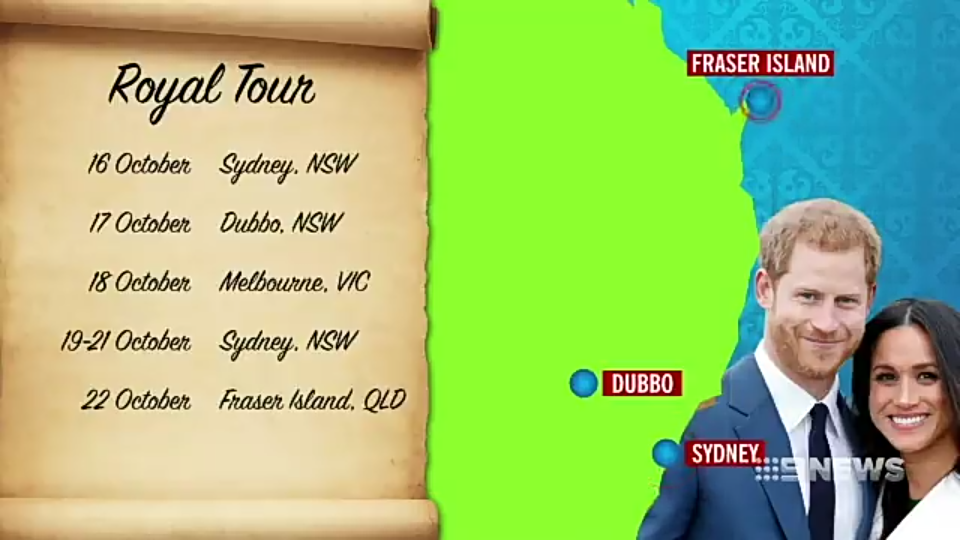 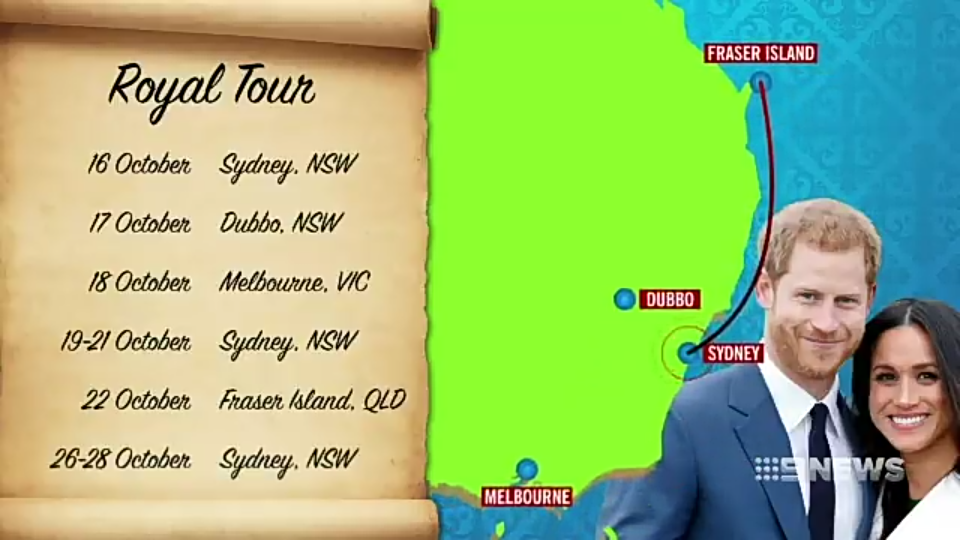 Why are going back and forth to Sydney so much? Better question still, instead of multiple visits to Sydney, how about Adelaide or Perth or or remote centres?

They are only doing day trips to Dubbo and Melbourne.

Did all markets get the bobble heads in Nine’s itinerary report?

As mentioned in the Nine News Content & Appearance thread last night, Sophie Walsh last night did a pre-recorded segment for Sydney’s news which looked looking at all the locations (even Fiji, Tonga & New Zealand) Harry & Megan will be visiting during the tour.

True to form, Nine News Sydney went all out for the graphics:

Why are going back and forth to Sydney so much? Better question still, instead of multiple visits to Sydney, how about Adelaide or Perth or remote centres?

Mainly so they can be in town Invictus Games as per @eddel, but I agree that October 19 & 21 probably could’ve been better used to visit other locations of Australia (remembering how William & Kate attended both during their April 2014 tour of Australia, perhaps Canberra and/or Uluru?) while still being in Sydney for the start & end of the Invictus Games.

Either way, the Australian media will probably be much more interested in the Royal Tour than the general public is. Aside from hearing about what the coverage is like, I don’t really care anyway.

The Opening Ceremony is on 20 October, that is probably why they are spending more than one night in Sydney. Harry is I’m guessing attending other functions during the day in the lead up to the Opening.

Whoops, of course, sorry I completely forgot about the Invictus Games, carry on.

Seven Melbourne have advised the following

In addition, Seven Morning News has been marked to run from 11:00am - 2:00pm on Wednesday and Thursday.

Note that other markets haven’t confirmed this.

Kensington Palace released more details about the tour on Monday this week.

The Duke and Duchess of Sussex's visit to Australia, Fiji, Tonga and New Zealand

Their Royal Highnesses The Duke and Duchess of Sussex will undertake an official visit to Australia, Fiji, the Kingdom of Tonga and New Zealand between Tuesday 16th and Wednesday 31st October.

Today and Today Extra are live everywhere on Tuesday. Except in Perth where Today will be delayed as usual and finish at 8:30am followed by the Morning News. Today Extra has been dropped in Perth replaced by Who Do You Think You Are? and Extra. 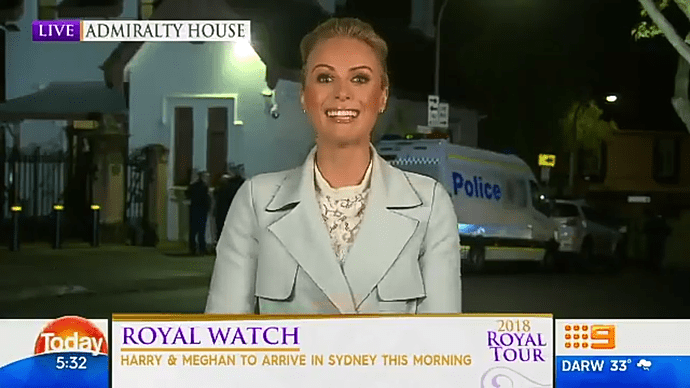 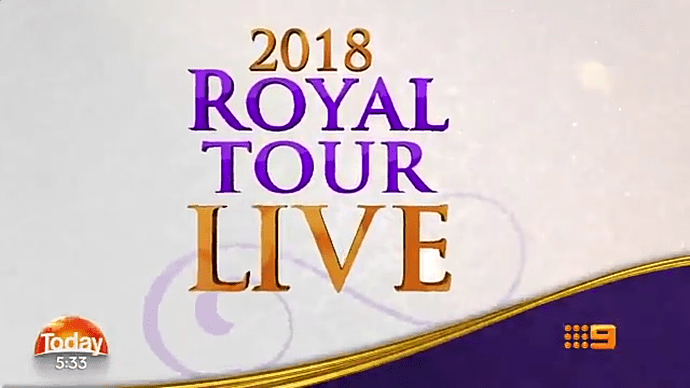 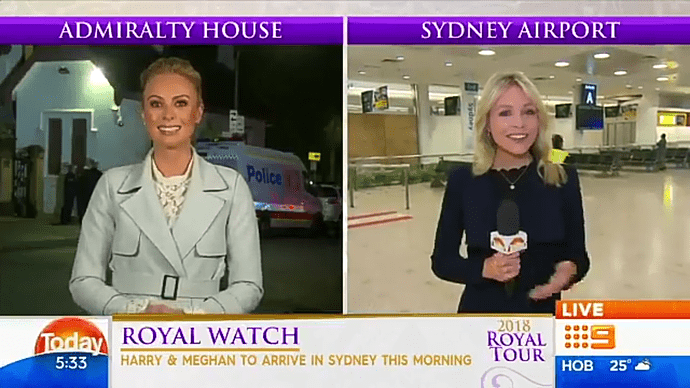 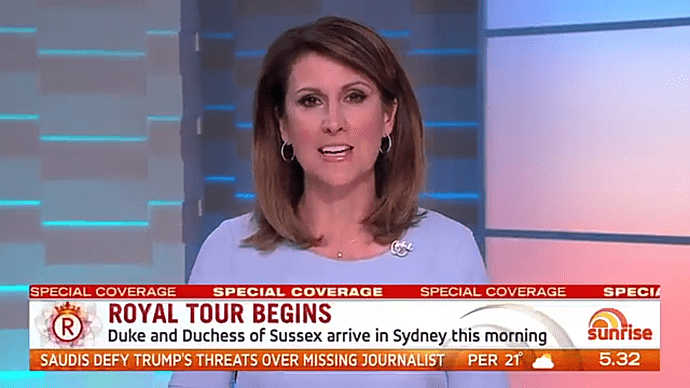 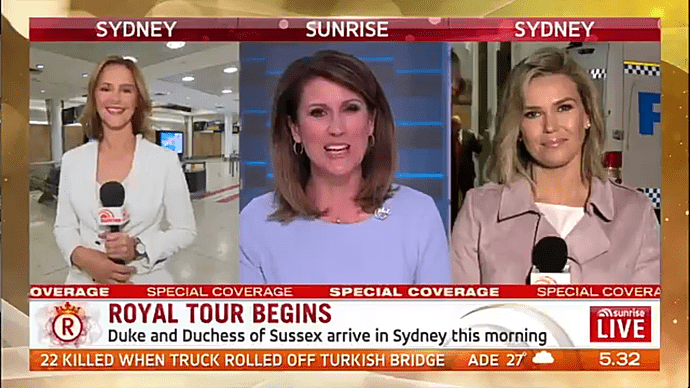 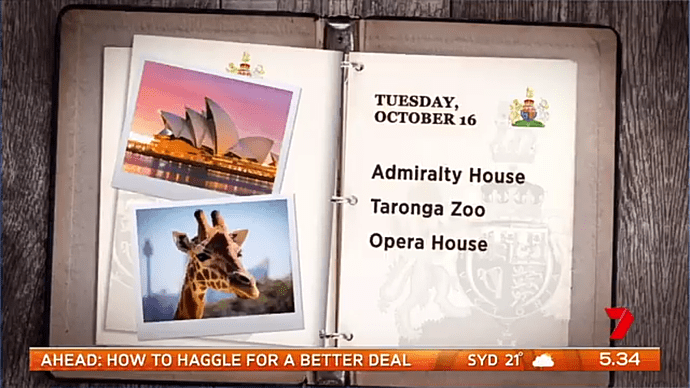 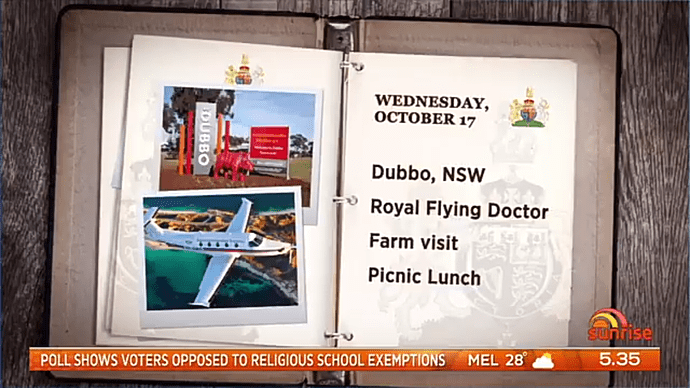 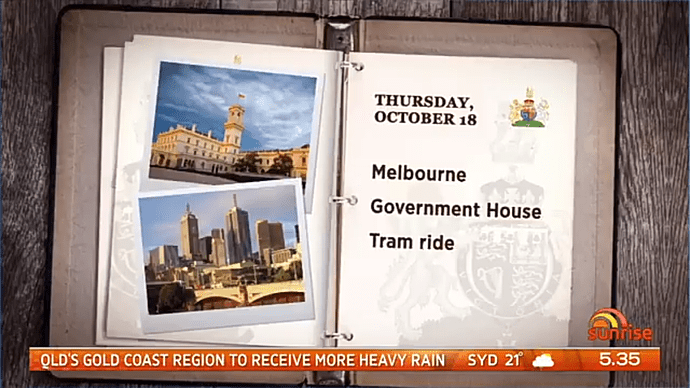 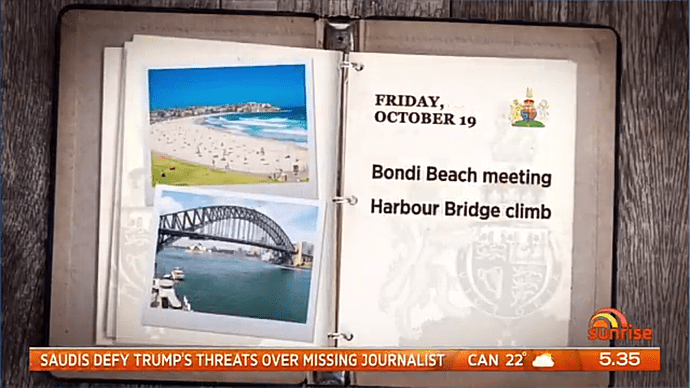