ABC is pleased to announce that production is underway in Melbourne on series four of the critically-acclaimed comedy/drama Please Like Me, with six new episodes.

After making his directing debut last year, Josh steps up to direct half of the new series, with the other half helmed by the show’s award-winning original director Matthew Saville.

Please Like Me will be filmed on location over the next five weeks and will air later in the year.

Amazed it got renewed IMO, I wonder what portion of the $$$ is coming from the US to keep it going - it rated so badly here even with main channel exposure.

I guess if it’s fully funded or the ABC is only chucking in a bit of money, it would be worth their while. They will have some new content and probably make some money from pay tv and overseas sales.

ABC advises 6 episodes of Please Like Me in this season

Please Like Me Series 4 premieres on Wednesday 9 November at 9.30pm

After its recent launch in the UK, where it’s been hailed as “the best original Australian TV comedy ever”, “like Girls directed by Wes Anderson” and “low-key, kooky-cool and warm-hearted”, Please Like Me returns for a fourth season, as Josh and his friends hurtle towards the end of their twenties and try to convince themselves that everything is gonna be OK. 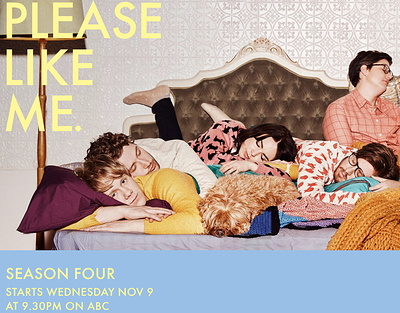 Please Like Me, the award-winning series about a boy, his dog and the parents, friends and lovers who rely on him, returns with its unique blend of honest comedy and bittersweet drama. A fixture on the top ten lists of TV critics around the world, it’s been described as “the hilariously awkward coming of age TV show you didn’t know you needed”, “like Girls directed by Wes Anderson” and “the best original Australian TV comedy ever.”

When we last saw Josh, he’d taken his trifle and stormed out of Christmas lunch after systematically ripping into his friends and family about the things that annoy him. As this season kicks off, Mum is teetering between depression and elation, Dad is worried that his partner, Mae, is bullying him, best friend Tom is threatening to move out with his girlfriend Ella, Mum’s flatmate, Hannah, has taken up boxing, Josh’s ex-girlfriend, Claire, has shacked up with a new boyfriend and Josh’s own boyfriend, Arnold, seems to be losing interest in Josh.

No surprise to hear that Please Like Me may not get another season as Pivot, the US network that provided substantial funding for the series closed this week.

US cable channel Pivot, which has co-produced the show since season two, shut down this week (November 1).

That means the show has lost a substantial component of its funding which won’t be easy to replace.

“I have to think about doing something else because I might not have another season,” Thomas explains. “Obviously we’re talking to everybody, but contracts aren’t built to have networks close down so it’s very tricky.”

Doubt it will get renewed considering Seasons 2 & 3 were very much influenced and funded by Pivot, not to mention its total failure at reaching an audience on linear TV here.

I know that many people here think that the show is a waste of taxpayer’s money because it doesn’t rate, but the last two episodes of Please Like Me have been nothing short of brilliant. The single location episode with Josh and his parents was amazing and the aftershocks of last nights episode will resonate with far too many people in our country.

Deadline says that Hulu will screen the fourth (current) season of Please Like Me. The season was scheduled to be shown on the now closed co-production partner Pivot cable network. All six episodes of the latest season, as well as the complete series to date, will be available to stream exclusively on Hulu.

“Thank you Hulu for rescuing our lovely little show!” Josh Thomas said in a statement quoted by News Ltd.

I know that many people here think that the show is a waste of taxpayer’s money because it doesn’t rate, but the last two episodes of Please Like Me have been nothing short of brilliant. The single location episode with Josh and his parents was amazing and the aftershocks of last nights episode will resonate with far too many people in our country.

Previous series had overseas funding and with other sales it was probably self funded. That’s why it’s had four seasons.

Of course they make money from it, no matter who they sell it to.

I wish I had discovered this show sooner, I just watched Episode 4. That was brutal and well done too. Devastating too.

Now I will need to go and get Season 1. If I understand it correctly Rose has depression? (or rather had depression) in the show?

After rave reviews in the US and an international Emmy nomination, Josh Thomas has called time on his hit series, Please Like Me.

I binged WATCHED this last week. Such a great show.

I read a post on Netflix Australia’s page and Netflix said they were working hard to get Season 4 of the show on their services as soon as they can.

Yeah probably but not in HD though and expiring soon from Iview.