In 2016, iconic Australian television program Play School celebrates 50 years on air as the nation’s most respected, trusted and longest-running children’s series. Since its initial broadcast in July, 1966, Play School has been entertaining Australian preschoolers, providing them with new experiences and learning opportunities, encouraging them to wonder, to think, to feel and to imagine. Throughout the birthday month of July, the ABC will present a variety of special content across ABC, ABC KIDS and ABC iview to celebrate the occasion with three generations of Australians who have grown up with Play School as an essential part of their childhood. #PlaySchool50 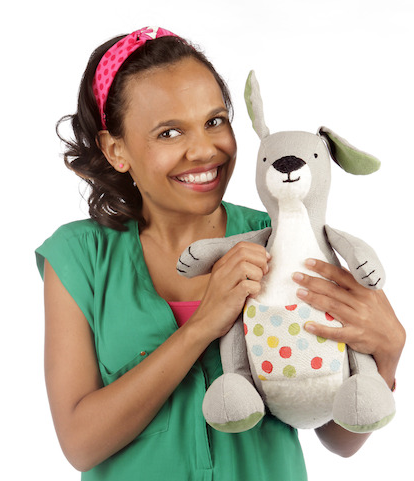 A new friend is set to bounce into ABC KIDS’ Play School just in time to celebrate the program’s 50th birthday. Joey the joey, designed by award winning children’s book illustrator Bruce Whatley (Diary of a Wombat, Josephine Wants to Dance, The Ugliest Dog in the World), will make her debut on the much anticipated birthday episode, Come To The Party, airing on ABC KIDS and ABC iview at 9.30am on 18 July.

Repeats start 5pm on 19 July and continues at 8am and 5pm every day until the end of July.

It has to be at least the 3rd time that Play School has changed timeslots over the years. The traditional afternoon airing was again bumped from 3.30pm to 3pm around…2007-ish I think?

You’re not gonna believe who was on Play School!! 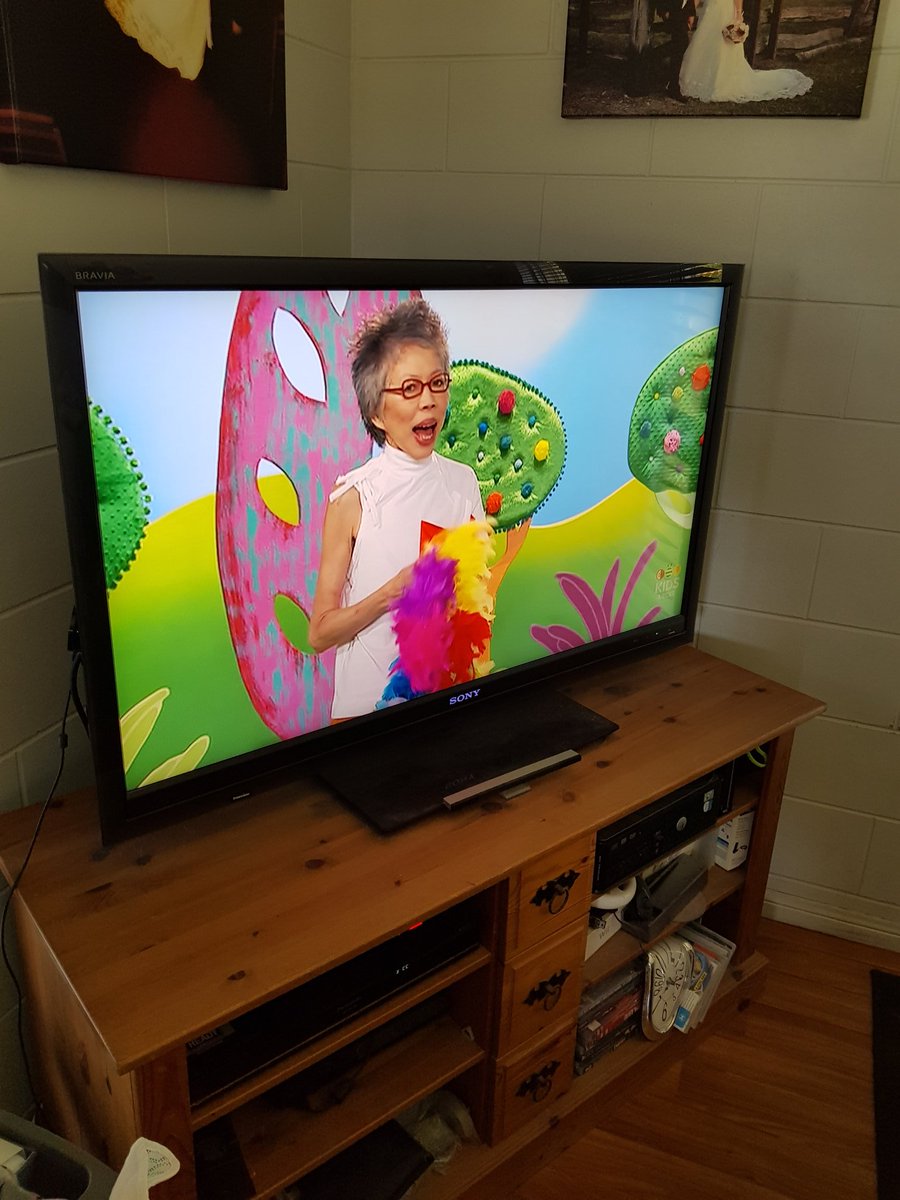 ABC must be re-running some of the 50th Anniversary episodes, The Feed did a story on Lee Lin Chin’s experience filming the episode.

My demographic is ironic hipsters and Saudi oil barons who want to make me their bride. Preschoolers don’t know me. 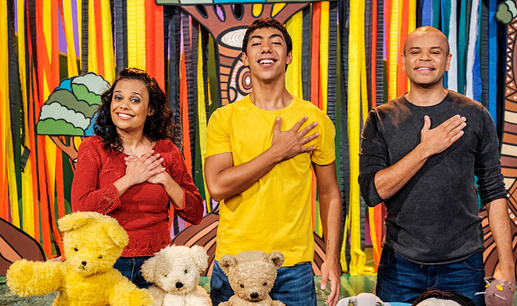 Join presenters Luke Carroll, Miranda Tapsell and Hunter Page-Lochard to give an Acknowledgement of Country in this special episode of Play School celebrating Australia’s First People. Find out about the presenters’ own country as they create a map of Australia and share how to say hello in their language.

Miranda goes on an adventure as she and a new friend show us how to care for country by helping the animals in the Play School bush. In the story, it’s the animals turn to help out by showing a young boy how to build a cosy home. Hunter is joined by didgeridoo player, Matthew Doyle, as he shows us the dance of his totem, the Wedge Tail Eagle. Then come to the party with all the Play School mob as they gather to celebrate giving the Acknowledgement of Country and their friendship.

The Play School projector shows us children giving their own Acknowledgement of Country at preschool. Through the Windows, meet some children, as they enjoy arts and crafts, play games and dance at a festival to celebrate Aboriginal and Torres Strait Island culture.

There’s a bear in there and some new friends too!

Kiya will make her debut on Play School during NAIDOC Week in the special episode, Acknowledgement of Country celebrating our Indigenous language and culture and furthering the commitment to embed Indigenous perspectives and viewpoints in ABC Children’s content. In this special episode, airing 8 July from 9.00am on ABC KIDS, presenters Miranda Tapsell, Luke Carroll and Hunter Page-Lochard will find out where Kiya is from and learn to say hello in her language.

Kiya is not the only new addition to Play School this year! Viewers will also be able to enjoy the brand new series, Play School Art Time , see new faces on Celebrity Covers and cover new ground in a series of Play School specials.

“This year, we’re extending the Play School brand by producing unique digital content to amplify the Play School philosophy. We’ve identified key areas of focus and have collaborated with specialists to create a series of one off Play School specials.

The first of these specials is Acknowledgement of Country launching in NAIDOC week. Get Ready For Bed will resonate with everyone struggling to get their little person to sleep and the very special, Beginnings and Endings , has been crafted to help families explain the cycle of life and the concept of death in an age appropriate way.”

Introducing an Aboriginal female toy to Play School reinforces the ABC’s ongoing commitment to Indigenous culture. Kiya was created in collaboration between Play School and Western Australian company Awe & Wonder, with assistance from the ABC’s Indigenous unit. Dr Red Ruby Scarlet and Aboriginal Early Childhood consultant Jessica Staines also assisted and were advisers and script outliners for the Acknowledgement of Country episode. Kiya is from Noongar country, in the southern corner of Western Australia where the word for “hello” is “kiya”!

Kiya’s clothing is made with fabric designed by artist Kiya Watt, who had this to say about her design;

“The ocean has strong connection to Menang Noongars. The symbols and dots throughout the middle represent the strong spirit and movements of the ocean. The dark blue lines outlined with white dots show the waterholes (ngamar) where we would fish from to provide food for our families. The ocean, like boodjah (land), is our mother and we must honour and protect, and only fish enough to provide for our family.”

Play School Art Time is an action-packed new series that celebrates creativity, curiosity and all things arty! Set in a magical art studio, the adventurous little Art Crew join presenters Zindzi Okenyo and Matt Backer to create, explore and experience the wonders of art. From watercolour paintings to robot sculptures and everything in between! See their creations come to life in the Art Time Gallery at the end of each episode.

In this very special episode, Play School is celebrating new life, and also reflecting on the love we have for those who are no longer with us and have died. It’s time to play, laugh, sing and have fun, and there are also times to be sad and treasure our memories of people and pets we miss. Emma Palmer introduces us to a friend’s newborn baby (and has some exciting news herself!) and Alex Papps shares how he and his family remember his grandmother. Through stories and play, we explore ways to help children through what can be challenging times. It’s time to talk about the beginnings and endings of life on Play School .

Get Ready For Bed

It’s time to put on your PJs and wind down with this special episode of Play School where viewers follow the routine of the Play School toys as they finish their day of play and get ready for bed.

This series of mini episodes features a much-loved line-up of some of Australian musicians and popular personalities who turn their hand at being a Play School presenter, performing popular songs and nursery rhymes. Featuring in the Play School Celebrity Covers are: Baker Boy, Megan Washington, The Cat Empire, Clare Bowditch, Alex the Astronaut, Sylvia Colloco and Amber Lawrence. Play School tackled the subject of Death for the first time in its 53 year history.

Last Monday, The Australian’s media section had a feature article on Jessica Rowe taking part on The Real Dirty Dancing. Jess also mentioned her dream was to appear on Play School and she already had two unsuccessful auditions. I read somewhere before many actors tried their luck to audition for a presenting spot on Play School and only a couple of dozen succeeded.

And she’s not an actor. 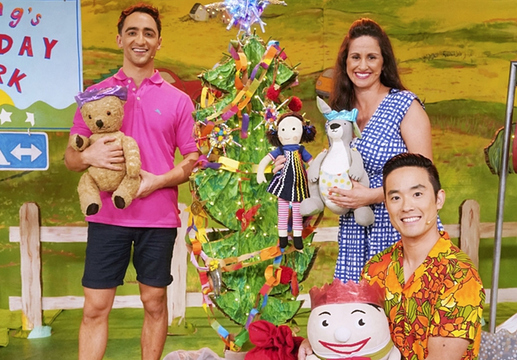 Join Emma and Matt as they head to ‘Kaeng’s Holiday Park’, where Kaeng has hidden Lots of fun Christmas surprises to be found.

Get ready to celebrate and sing all your favourite Christmas songs and decorate the Christmas tree in this very special concert. 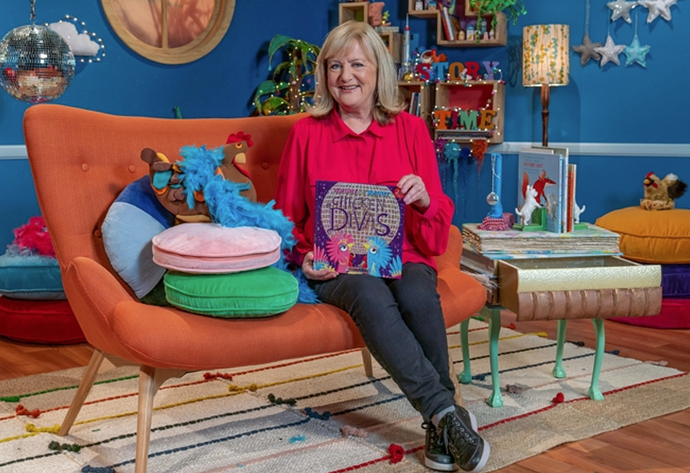 Play School takes part in the National Simultaneous Storytime (NSS) is held annually by the Australian Library and Information Association (ALIA). Every year a picture book, written and illustrated by an Australian author and illustrator, is read simultaneously around the country.

Now in its 20th successful year, the event aims to promote the value of reading and literacy, using an Australian children’s book that explores age-appropriate themes, and addresses key learning areas of the National Curriculum for Foundation to Year 6. Join Denise Scott as she reads from the Play School Story Time couch. 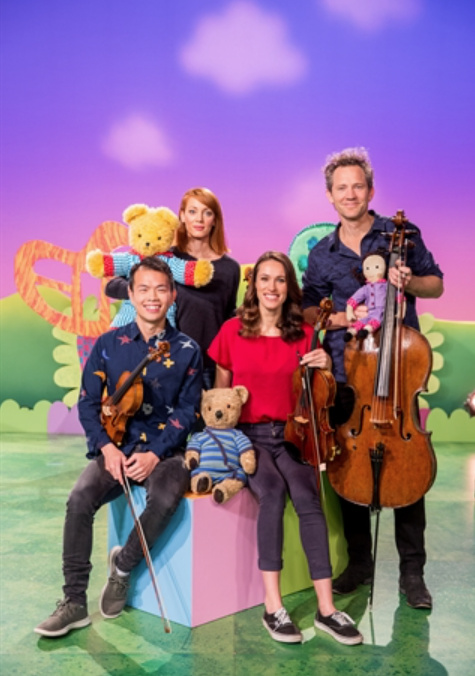 10.10 am Weekdays on ABC KIDS and ABC KIDS iview

The Cat Empire go marching one by one with their rendition of ‘The Ants Go Marching’.

Megan Washington takes to the piano for a rendition of a Play School classic like you’ve never
heard it before.

Join the Australian Chamber Orchestra for their stunning rendition of ‘Brahms’ Lullaby’.

Silvia Colloca’s skills in the kitchen and beautiful operatic voice combine for the perfect musical
take.

Get quackin’ with country star, Amber Lawrence as she sings ‘Five Little Ducks’!

Alex the Astronaut and Henny Penny talk a lot! In between chats Alex delivers a guitar-driven
rendition of ‘Chicken Talk’.

Settle in with the soothing sound of Clare Bowditch and her gorgeous version of ‘Hush, Little
Baby’. 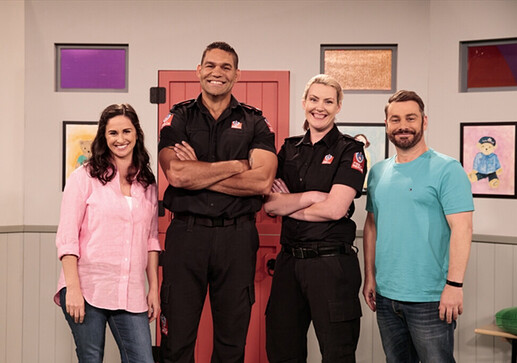 From the Fire and Rescue Services to paramedics and the SES, our ‘Everyday Helpers’ play a vital role in ensuring community safety and care.

In this empowering new series, Play School teams up with the Australian Red Cross and The Australian Institute for Disaster Resilience (AIDR). With the help of some very special guests from the emergency services, we share early childhood safety messages relevant during times of natural disaster.

Through imaginary play, stories and song, Play School explores ways children can maintain a sense of agency, even during very challenging times. 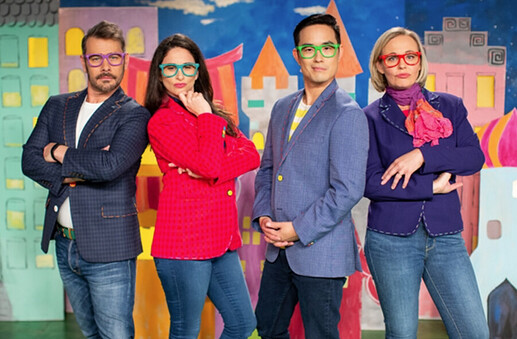 Ground-breaking investigative news program, Nursery Rhyme News Time is back! No matter how confused our new reporters are, they always ask the big questions;

Along with the help of our Nursery Rhyme Experts, our news reporters Teo, Emma, Kaeng & Abi head to the scene of the rhyme for the full story!

The show gets its own cover on Stellar magazine this Sunday. 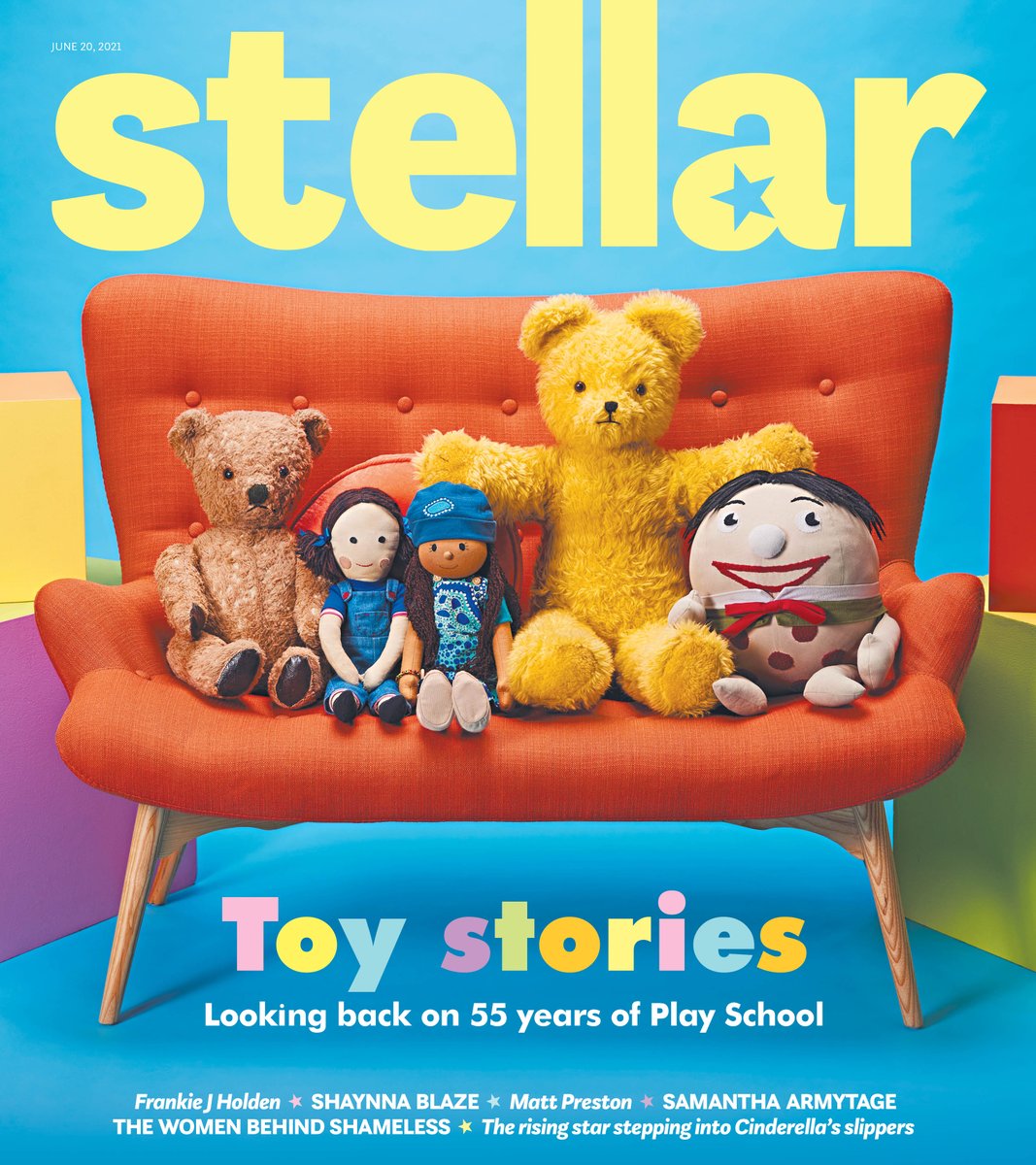 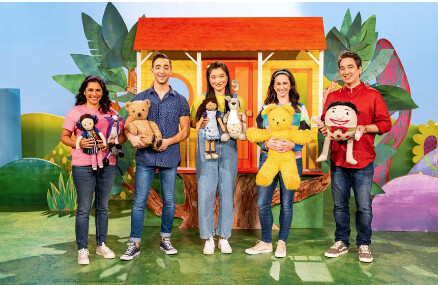 To celebrate the 55th year of entertaining children and their families, Play School presents a 45-minute celebration of silliness and laughter with A VERY SILLY SPECIAL.

Join Michelle, Leah, Matt, Alex and Emma and a 4-piece live band as they entertain with your favourite Play School songs and the silliest shenanigans. Highlights include interactive screen graphics and Dancing Pants like you have never seen them before.

Children around the country will be featured dancing to brand new silly dancing song “Do The Silly” from Zindzi and for the first time in decades a new animated version of a Play School favourite “The Ning Nang Nong”.

To celebrate the 55th year of entertaining children and their families, Play School presents a 45-minute celebration of silliness and laughter with A VERY SILLY SPECIAL.

Assuming it will be on ABC Kids and not the ABC? So this 55th year of children’s television special of Play School will go against Insiders?