Discussion thread for Telethon on Channel Seven Perth, which is held over a weekend in October each year.

The West Australian reports Jessica Mauboy is special guest for this year’s event. She will perform on the opening on October 15, and the closing the following night. 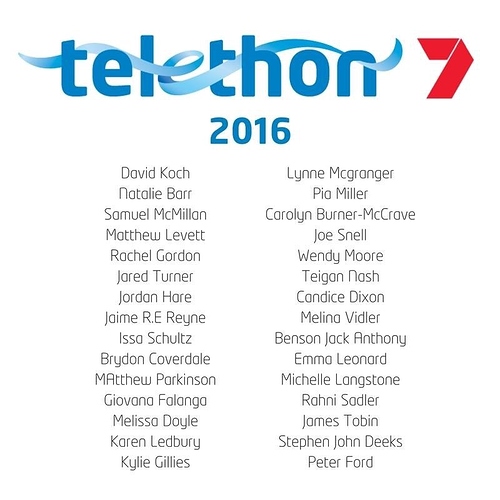 Will be in the Phone Room [or Call Centre as they now call it] Saturday night. Call me

Have they moved the call centre to the west of is it still at the Sunday times?

This list doesn’t include those coming to preform there music

Have they moved the call centre to the west of is it still at the Sunday times?

Still at the Sunday Times.

Next year will move to the west with the sale of Sunday times to 7 West media and it will be the 50 perth telethon,amazing since moving to Pcec telethon has gone from strength to strength.Imo

I actually don’t love the PCEC setup with the panel. I prefer it in a studio. But I understand why they do it now. They also need to refresh the graphics and everything soon. Maybe next year for 50.

Next year will be the 50th anniversary. Telethon usually occurs on the 2nd or 3rd weekend of October every year since 1967.

Over the past 49 years, the people of Western Australia have donated over $232 million to Telethon.
$232 million! We are so proud of your generosity W.A. Your money has been spread back into the community to support crucial child health research, provide much needed medical equipment, and drive social welfare programs within W.A.

The 2016 Telethon weekend kicked off to a sold out audience along with thousands watching the live broadcast in Perth, around the state and indeed around the world. Jessica Mauboy, Rob Mills, Missy Lancaster, Taylor Henderson, Cyrus plus Jess & Matt entertained the audience and helped get us off to a cracking start. Marcia Hines came from the Lexus Ball to give a surprise performance, while The Black Sorrow’s brought some rock and roll to Saturday night’s entertainment.

Little Telethon Stars, 6 year old Cody Colmer and 8 year old Hailey Ardagh stole our hearts with their entertaining stories as they visited the Bendigo Bank Kids Carnival, The Sunday Times Call Centre and the set of Telethon at Perth Convention and Exhibition Centre.

The marathon 26 hour TV broadcast went live across Channel 7 Perth and across W.A. on GWN7. Plus it was streamed nationally via the telethon7.com and thewest.com.au websites.

The team at Channel 7 Perth and The West Australian led an army of volunteers, plus more than 250 TV production crew, 600 entertainers and 1,000 volunteers to make this Telethon weekend the most successful ever.

There were plenty of major donations from Telethon’s famous Million Dollar Partners, but as always it was the generosity of the people of Western Australia that shone through raising a record breaking $26,290, 154.

BHP Billiton kicked off the weekend with a donation of $4 million dollars as part of a $20 million five year commitment from them. Wesfarmers also continued to donate with a further $1.25m. Andrew and Nicola Forrest’s Minderoo Foundation contributed $1 million, by matching all of the donations phoned through to The Sunday Times Call Centre in the first few hours of Telethon on Saturday night.

Minister for Foreign Affairs Julie Bishop donated of $1.5 million from the Federal Government. The Lexus Ball raised an outstanding $1 million from the generosity of their guests, which included some massive donations from individuals totalling $336,000 to fund an important Autism research project at The Telethon Kid’s Institute.

Premier Colin Barnett handed over a cheque for $500,000 from the State Government on behalf of all West Australians.

The Telethon Adventurers raised over $500,000 during the year including a generous $250,000 from Bill Beament on behalf of Northern Star Resources.

7 Network personalities from Home & Away, 800 Words, Sunrise, The Chase Australia and Secret Daughter got into the spirit of Telethon with Mark Gibson. They competed in some very funny, and often very messy, live challenges to see how much money they could talk Crown Perth into donating. It ended up being a whopping $2.5 million. Crown has now donated over $13.1 million to Telethon.

The Flight Centre telethonauction.com.au which ran throughout the weekend raised an amazing
$103 280.

Little Telethon Star Cody Colmer’s local community of Albany also threw their support behind Telethon with an Everyday Hero fundraising page. They hoped they could raise around $3000, they banded together and smashed that target, raising more than $15 000.

For the 5th year Hawaiian Property Group held The Rob Broadfield Dinner at Cable Beach Club Resort & Spa in Broome and donated $500,000. Plus Hawaiian also hosted 7 personalities and artists from Sony Music at Claremont Quarter throughout the weekend.

Ex-rugby player, Matt Fuller, UFC champion Soa “The Hulk” and Chef Josh Catalano spent months preparing for a 24 hour challenge that saw them stay on ergo-grinders and a bike for 24 hours straight across the weekend at Perth Convention and Exhibition Centre. Peard Real Estate donating
$40,000 towards their efforts, and an additional $36,000 in fundraising. The Spud Shed’s Tony Galati arrived at the Perth Convention and Exhibition Centre on Sunday afternoon to support his good friend Soa “The Hulk” and generously handed over a cheque for $50,000.

In the closing stages of the broadcast, Executive Chairman of Seven Group Holdings and Chairman of the Channel 7 Telethon Trust, Mr Kerry Stokes AC generously contributed $1.5 million on behalf
of his private company Australian Capital Equity.

Telethon CEO, Steve Mummery was ecstatic with the result from the weekend.

“W.A. is going through some very tough times economically, so we really appreciate the effort that people have made this year in digging deep, not only for this weekend, but right across the year in helping Telethon reach this special amount. My thanks go out to all of the mums and dads and their kids, who have helped raise money for Telethon over the past 12 months.” he said.

Local West Australian My Kitchen Rules contestants Anna and Jordan plus Nev and Kell also joined in on the fun!

Social media again played a huge role in connecting celebrities with their fans across the Telethon weekend, with loads of personalities taking to the Telethon Twitter, Facebook and Instagram feeds

to interact live with more than 2 million users. This year #telethon7 also had massive support from around the world including from the United States, Canada, France, Morocco, Norway, Germany, Italy and South Africa. In the always competitive River competition, South this year defeated North for the area with the most donation.

Congratulations to all involved in this year’s Telethon

next year we could aim for the magical $30 million mark.

I know that those notable six and seven figure donations (as per the press release) would’ve helped quite a bit, but a final total of over $26 million is an absolutely amazing effort for Perth’s Telethon. Congrats to all involved!

Next year we could aim for the magical $30 million mark.

I don’t know if there would be an aim for the magical $30 Million mark in 2017’s 50th Telethon, but I certainly wouldn’t be surprised if the final total is above that figure in the next few years!

Perhaps some sort of “50 Years of Telethon” special (obviously separate from the main broadcast) looking back at some of the more memorable moments might also be a good idea?

I love Telethon. Love everything about it. The phone room was so much fun.

But I do miss the days of big international stars making an appearance. Heck. Even big Aus acts. Jess Mauboy, Taylor Henderson, Anthony Callea, Millsy and the past years X Factor contestants every single year now get a bit monotonous. Let’s hope they do pull out all the stops for the 50th. [Yes I also get why they do what they do these days].

I went to the PCEC after my phone room shift for the first time. The staging and panel was heaps smaller than it looks. But was great to see it ‘live’ and in ‘production’ mode. Was there til 3am. Will go back next year for sure.