TV Extra will include in-depth celebrity interviews, reviews, behind-the-scenes news and stunning photoshoots with some of the nation‟s most loved TV personalities. A detailed TV highlights section – the best shows to watch at a glance – will also feature within the complimentary guide.

Exclusive content for the first issue includes an interview with Molly Meldrum and Samuel Johnson, ahead of the launch of Channel Seven‟s Molly, an interview with Wanted’s Rebecca Gibney and her mum Shirley, and a must-read feature on My Kitchen Rules new "Cougar Couple‟.

“With an audience footprint of more than 4.4 million, the brand‟s continued reach and relevance is impressive, and we‟re continuing to invest in this audience into the future,” Legdin added.

The launch of New Idea’s TV Extra and MKR partnership will be supported in print, TV, digital and on social channels.

I wonder how long this new “TV Extra” project will last? My prediction is two years at best.

They’ve already been challenging TV Week with TV exclusives over the past few years so not so surprised by this.

The Australian reports today that Seven West Media has taken sales and editorial control of Pacific Magazines magazine titles from Yahoo7. Under the new deal Yahoo7 will still create native advertising for titles like New Idea, Who and Better Homes and Gardens, but things like e-commerce will be controlled in-house.

Pacific Magazine announced today that Famous magazine would cease publication from this week, but it would be converted into FAMOUSLive digital brand.

The Australian edition of Prevention magazine will have a new publisher after Pacific Magazines decides to hand back the licence to Rodale. The December/January issue of Prevention will be the last to be published by PacMag.
Pacific will also cease publication of Bride to Me, Practical Parenting and Your Garden titles. Bride to Be will relaunch as mywedding.com.au in September; the final issue of the Bride to Be magazine is on sale now. The final print issue of Practical Parenting will go on sale on September 1. Your Garden will close entirely with its final spring edition on sale this Thursday (August 25).

Pacific Magazines, the publishing arm of Seven West Media, today announced portfolio changes designed to strengthen its business and position it for the future.

Peter Zavecz, CEO, Pacific Magazines, comments: “Our portfolio changes are designed to focus Pacific on its key consumer brands and categories and to build a stronger business, more able to provide outstanding multiplatform content experiences for our audiences and successful outcomes for our clients.

“The decisions announced today are part of a transformation process at Pacific which creates a more sustainable, future focussed business with stronger competitive advantage.”

Peter Zavecz, says: “Our strategy is about adding value to the audiences we target. We now believe we can best meet the demands of our bridal and parenting audiences with digital-only business models.”

Your Garden will also cease publishing entirely, with its final Spring Edition on sale 25th August.

The licence to publish Prevention will revert back to Rodale, effective January 2017, with the December/ January issue (on sale 7 November) the last published by Pacific Magazines. Rodale will be announcing a new publisher for Prevention in the Australian market soon.

Peter Zavecz says: “The decision for Pacific to cease publishing these titles in print has not been an easy one. We are very sad to say goodbye to the talented staff and friends whom are affected by today’s changes.

“I would like to sincerely thank our staff for their contribution to these brands.”

Pacific is working with affected teams to transition as many staff as possible into new roles within the business.

Peter Zavecz, the Chief Executive Officer of Pacific Magazines, has advised us that he will be leaving the company, effective 30 September, 2016.

Peter has done a remarkable job over the past 11 years, as Commercial Director, as a Publisher and as CEO of Pacific Magazines.

He has led a terrific team working on some of the best brands in the publishing business and successfully led the Pacific Magazines transformation into new forms of digital delivery. It has successfully launched new digital products and the business has been transformed over the past two years.

Pacific Magazines has leadership in most of the categories in which it publishes and is taking the lead in driving these brands beyond publishing.

All of us at Seven West Media and his people at Pacific Magazines wish him well in his new role.

We understand and acknowledge his decision to relocate to his home town in Melbourne with his family.

Peter Zavecz is joining News Corp in Melbourne as new managing director - commercial of the Herald and Weekly Times.

Pacific Magazine has offloaded two more titles - it has sold kids magazines K-Zone and Totalgirl and their websites to Nextmedia. Editor-in-chief Dan Findlay and the majority of the K-Zone and Total Girl team will be joining Nextmedia and relocating to St Leonards in Sydney at the end of this month, with Nextmedia’s first issue of each title to be on sale in December.

As Pacific’s business, brands and audiences continue to evolve, along
with the requirements of advertisers and agencies, the company has confirmed today it will withdraw
from the Audited Media Association of Australia (AMAA).

Gereurd Roberts, Chief Executive Officer, Pacific, comments: “Our brands have transformed and so
too have our partner expectations. We’re being asked to deliver more granular, audience-based,
cross- platform measures that better reflect how consumers interact with our brands, and the
integrated solutions our clients require.

Pacific will continue to deliver transparent, independent third-party print metrics via Roy Morgan
and also through Ipsos, and will continue working with Nielsen in developing its digital audience
measurement tools.

The use of these metrics, combined with the fusion of cross-platform data, will ensure Pacific
remains one of the most measured media companies in the country, and will ensure advertisers and
agencies receive the total-audience insight, information and clarity they are asking for in order
to make informed planning and buying decisions.

Pacific is also continuing to engage with the AMAA on alternative and proposed measurements they
are currently developing across platforms.

“Pacific is absolutely committed to providing accurate and transparent audience measurement.
Granular audience-first, cross-platform metrics are where the market is demanding our focus, and
reflects what we see as the future for our evolving, dynamic brands,” Roberts added.

As Pacific’s business, brands and audiences continue to evolve, along with the requirements of advertisers and agencies, the company has confirmed today it will withdraw from the Audited Media Association of Australia (AMAA)

This came after Bauer Media and News Corp’s NewsLifeMedia withdrew from AMAA. All three magazine publishers are only relying on EMMA readership survey and Roy Morgan Research.

“Our redefined strategy evolves the brand with timely and relevant changes that cement Girlfriend’s proud heritage as the country’s number one resource for teen girls – with a more sophisticated multi-platform content approach that is directly tailored to the Gen Z Australian teen girl today.”

For the first time, Girlfriend will present an interactive digital magazine as an aspirational content vehicle that is fully enabled for sharing and shopping. The premium environment for advertisers offers visibility and brand connection to the Girlfriend audience in a ‘pop-up’ frequency designed to bring the content to life whilst capitalising on news and trends.

The new luxery quarterly print version features a double-sided, glossy, foiled cover and premium finishes throughout and is a complete guide to the season ahead. Teen focused content pillars include friendship and love, entertainment, careers and extended mind, body, fashion and beauty advice – all with Girlfriend’s signature message of positivity and empowerment.

Emma Watson fronts the cover, with the issue priced at $7.99 (available from today). 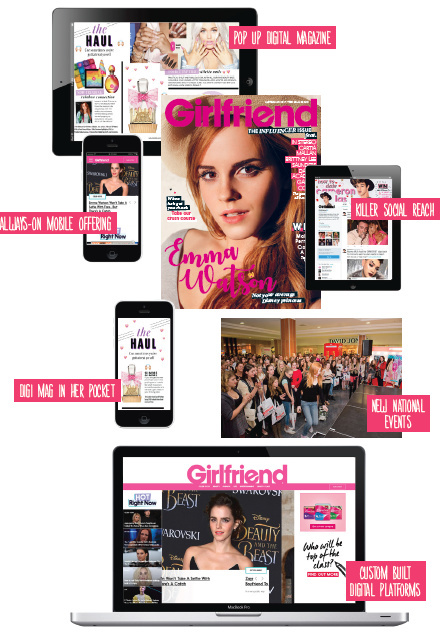 Pacific Magazines is reportedly planning to outsource some sub-editing to Pagemasters, with 11 possible redundancies.

Pacific Magazines is set to reduce its cost base before 30 June, with 11 redundancies planned and consultations underway with sub-editors across all brands

UPDATE 29/6: the publisher has confirmed it will outsource 22 sub-editor roles across its mastheads to Pagemasters. Mumbrella reports the transition process will take up to six weeks, with sub-editing staff to remain at Pacific Magazines until it is completed.

Shane Sutton has left Who Weekly after more than eight years to pursue other projects. He had been editor of the magazine since 2015 and deputy editor before that.

EDIT: Emma Nolan will be the new editor of Who from December. She is currently editor in chief of TV Week.

More fake news but this time from New Idea. 'I don't feel the need to exact revenge on Karl': Thorburn slams rumours

Cassandra Thorburn has penned an open letter saying she finds it hurtful to be compared to her ex-husband Karl Stefanovic's new girlfriend but she has no desire to "exact revenge" on the Today show host for leaving her.

New Idea, Australia’s biggest women’s brand network1, today unveiled a bolder and brighter new multi-platform look – to coincide with one of this year’s most anticipated stories, the engagement of Prince Harry to Meghan Markle. The revamp, “Colourful Moments”, unifies design across all of New Idea’s channels and gives the country’s best-loved women’s media brand a more sophisticated look and feel, with a new colour palette, new fonts and flagship lifestyle sections such as Royals, food, beauty, fashion and health re-energised in both digital and print.

Louisa Hatfield, General Manager, Entertainment and Family, comments: “With a multi-platform footprint of 5 million every month – more than any other Australian women’s brand – New Idea’s power to entertain and connect with such a huge community of Australian women is stronger than ever.

New fonts include a mix of modern handwritten type and a fresh selection of traditional typefaces,
alongside a new photographic creative direction influenced by both social media and red carpet
trends. Food content has been simplified to make recipes easier to read, a more classic edge is
introduced to beauty content, whilst health becomes colour themed with a focus on uplifting the
reader.

Launching today, a redesigned homepage provides users with a more sophisticated, premium experience
with an emphasis on ensuring new and returning users are served with a fast, intuitive, tailored
content feed with seamless integration for commercial partners. Design-thinking underpins the
development of the entire site with a view to optimising web experiences, whilst data and event
tracking guides usability improvements with A/B and multivariate testing to assess user engagement,
time on site and page views. 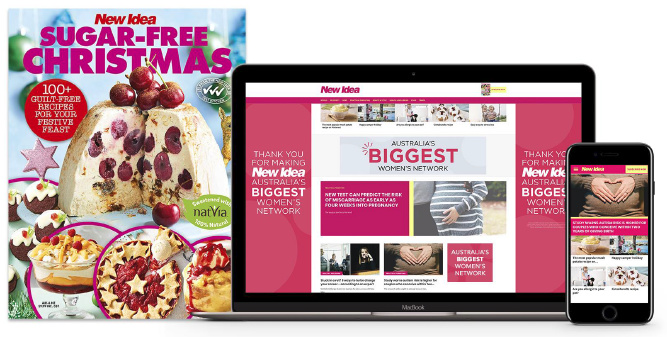 New Idea concocting more stories. And that story underneath about Prince William being crowned King at Christmas?

Hey @DeltaGoodrem , anything we should talk about ? Want apologise to @TerriIrwin, Sophia Forrest, the unnamed Mexican companion and all my other Aust Magazine lovers. Seems I’ve moved on https://t.co/M4tQP1ja85 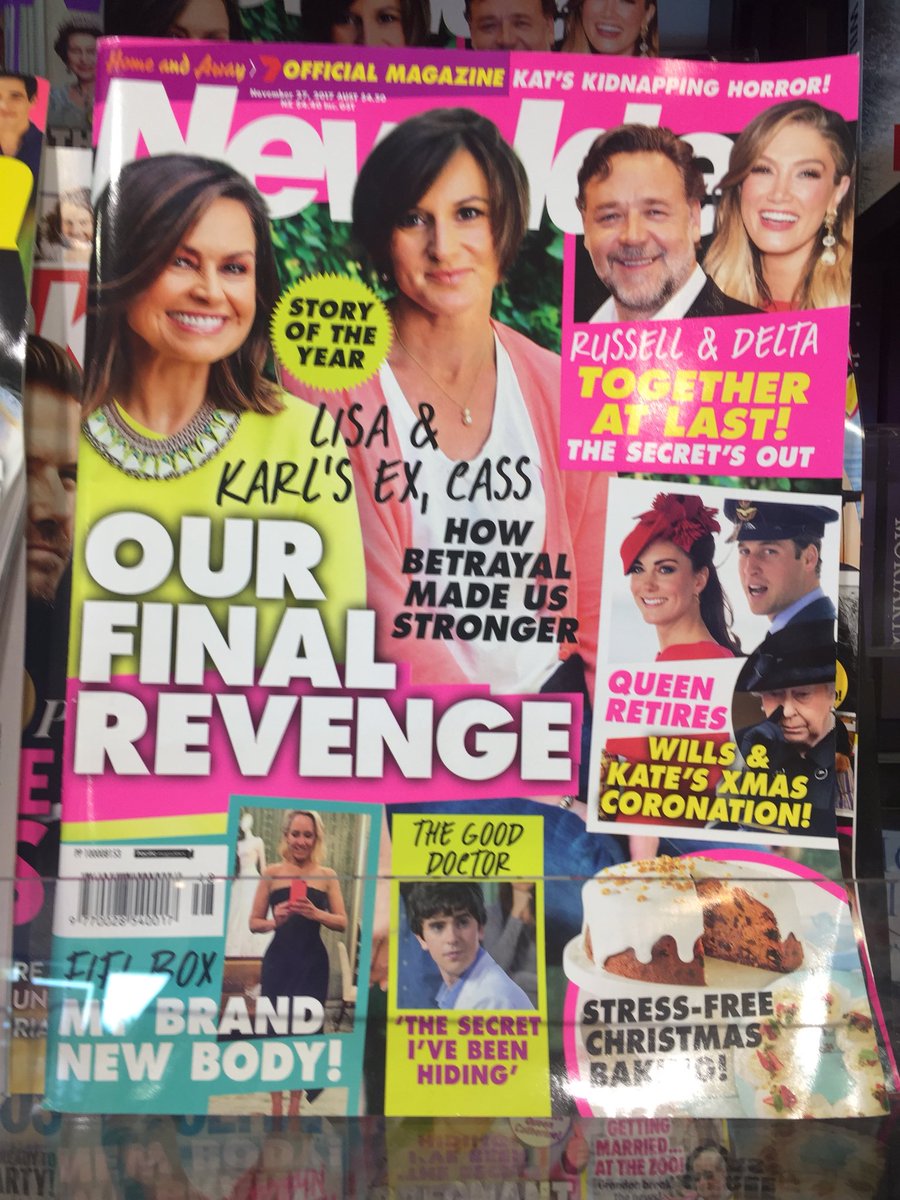 This is last week’s issue and Delta only just found out? The story was about Russell Crowe possibly joining The Voice as a judge, the magazine is just exaggerating.