I get the feeling Ross Stevenson does a lot of the heavy lifting on that show and Russ is just along for the ride. Could be wrong on that but it doesn’t sound like the team effort it did when Burns and Kate Stevenson were there.

I’m surprised Nine hasn’t tried to steer the show in a newsier direction and teamed Ross up with someone who is capable of handling meatier topics. Can’t see them persisting with the style of show they do now without Ross.

Would argue Ross did the heavy lifting too when he was with Burns. The difference is now Ross and Russ just feels and sounds like any other ‘regular’ breakfast duo whereas Ross and John had a unique dynamic not just between them but with the wider team (eg; Kate, Mikkayla, Damian Tardio, etc) as well.

Is this the same Tony Pilkington that used to be on FiveAA? Will be a great listen if it is him

Is this the same Tony Pilkington

There is only one Pilko.

4BC live and local with Adelaide talent.

Plenty of Nine TV talent who would do well to have a two week trial.

John Burns, former 3AW Breakfast co-host, who says that Russel Howcroft’s time is up, with the writing on the wall he will be replaced when his contract expires

Well he would say that, wouldn’t he.

Alice Coster of Page 13 of the Herald Sun has spoken to John Burns, former 3AW Breakfast co-host, who says that Russel Howcroft’s time is up, with the writing on the wall he will be replaced when his contract expires.

Seems still no opportunity for Michael McLaren to fill in on a 2GB weekday shift during this survey break. Similar to the past couple of breaks too (although i think he did cover Chris Smith weekend mornings last summer, woopie do). One of their biggest talents kept locked away in the overnights dungeon. Of course it might suit Michael to not move off overnights even for a survey break. But can’t imagine he would knock back a chance for some day exposure in between surveys if offered to him? Truly nocturnal…

I had an opportunity to move to permanent overnight shifts last year. It suits me with my family circumstances. I’m also largely left alone to just get on with my work. And my employer is happy to have someone who actually wants to fill that shift.

I wonder if Michael is in a similar situation. Having been on nights for so very long, maybe the routine works on a personal level. Also given daytime 2GB is less stridently conservative since Nine took over and Alan left, maybe Michael finds there’s less interference in his content in the middle of the night. Nine may also be cognisant that it’s difficult to find someone who is both willing and good at the shift, given the unique challenge of filling time in an interesting manner for hours on end every single day, and be happy to keep Michael happy by not pushing his body clock around too often.

Just speculating of course, but as a fellow overnight worker I can see how that could be the case. 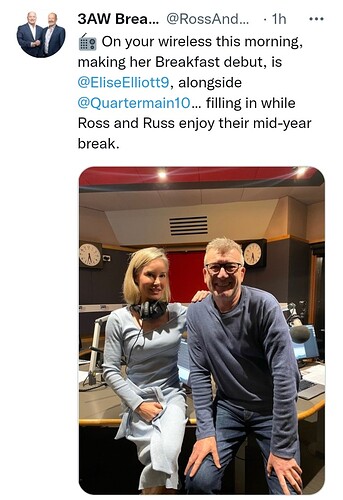 And Tom Elliot is now on filling in for Neil Mitchell. I wonder if Elise and Tom car pooled together this morning.

Is this the same Tony Pilkington

There is only one Pilko.

4BC live and local with Adelaide talent.

Plenty of Nine TV talent who would do well to have a two week trial.

Found out Pilko lives in Brisbane now, he’s travelled back to Adelaide last times he’s filled in on FiveAA

Jacqui is great on Afternoons. Really enjoying it

I much prefer all of Dee Dee’s fill ins, whether it’s Jacqui, Elise Elliott or Jo Hall, they are all very talented behind the microphone. Nothing against Dee Dee personally, but I’m not a huge fan of hers on radio.

Was just a great exchange between Fiona and Jacqui too. The segments are flowing better and it not rushed or dismissed. I find a lot of “hmm yep. Ok, let’s move on” kind of attitude on a normal weekday.

She is great. It’s a new energy.

Someone might need to remind her that there is a live camera in the studio - caught her rolling her eyes at one caller.

All in all, really enjoyed Jacqui’s first show.

Herald Sun’s Media Street column reports that Nine only wants one host in each state for the rebranded Wide World of Sports program commencing November 1. Gerard Healy is reportedly reluctant to change his ways because he has always worked with a partner. Therefore, sources indicate Healy is considering three options: 1) return to 3AW and embrace the single host role with the assistance of regulars Matthew Lloyd, Leigh Matthews and Matthew Richardson, 2) move the show to SEN with Sam McClure and go head-to-head with WWOS, or 3) retire. When asked for comment, Channel 9 said the line-up will be announced in coming weeks.