Updated: Nine and Southern Cross have announced 15 one hour bulletins for regional Australia.

Great choices but interesting for NSW.

@Read_It_First, can you tell use if the local news will be inserted into the main 6pm News bulletin? Or will it be a whole separate bulletin?

Great choice!
Samantha Heathwood is already known in NQ, as she used to present the local WIN News bulletin, and has previously presented WIN News for Townsville, Mackay, Rockhampton, and Toowoomba at various stages.

I always thought she was a pretty decent presenter back then, so it’ll be great to see her back on our screens for local bulletins again!

can you tell use if the local news will be inserted into the main 6pm News bulletin? Or will it be a whole separate bulletin?

“Produced by Nine as part of its $500million affiliation agreement with Southern Cross Austereo, the hour-long programs will air at 6pm on weekdays and add local news, sport and weather reports to Nine’s existing Sydney, Melbourne and Brisbane bulletins.”

Smart choice by Nine, through WIN she has presented in every region in Queensland that will be gaining a local bulletin, so will be a well known face.

Southern Cross Austereo (SCA) and Nine have announced that in 2017 SCA will broadcast 15 dedicated local Nine News bulletins to viewers in its regional markets in Queensland, Southern NSW and regional Victoria.

The one-hour Monday to Friday news bulletins will contain local stories that matter most in their communities, dedicated local sport and weather reports, together with all the State-based, national and international news that viewers have come to expect from Nine News.

The bulletins will be rolled out progressively starting in February, first in Canberra and then in Wollongong with other markets following.

In one of the largest rollouts of news operations in Australia, in total more than 110 staff will be employed by Nine in the regional news division. Staff will be based in Sydney, regional NSW, Brisbane, regional Queensland, Melbourne and regional Victoria to produce and put the news services to air in each of the regions.

The production and broadcast of the local regional news bulletins was agreed between Nine and SCA as part of their new programming affiliation agreement, with Nine meeting the necessary employee and capex costs.

Grant Blackley, chief executive officer of SCA, said: “We are committed to our local communities and this local news project is an investment in these local economies and local jobs. Nearly 80 dedicated news staff including journalists, camera operators and editors will be employed and located in 18 regional centres to bring the news to our regional viewers, with another 30 working on the bulletins in Nine’s metropolitan newsrooms.

“If there is breaking news in Cairns, in Orange or in Albury, National Nine News will be on the ground to cover it and our viewers in those communities will be able to rely on Nine News to bring them the best television coverage.”

Mike Dalton, head of Nine News regional, said: “This is a big win for regional Australia. The Nine News brand is synonymous with bringing viewers an unrivalled news service, with a proud history going back 60 years.

“For the first time, our brand will be extended into country areas, offering regional viewers the very best in news gathering and reporting. We can’t wait to start telling the stories that matter the most to people in the new regions into which we’ll be broadcasting.”

Local news will be broadcast to 15 television sub-markets:

If they are going to produce 1-hour bulletins, I wonder who the respective sport and weather presenters will be ?

– It also occurred to me, do you think Nine will air the metro bulletins on Go! or GEM as an alternative for viewers who would prefer to watch the live bulletin?

Shouldn’t this thread be in the “Regional News Broadcasts” section rather than the Nine News one?

Anyway, I think it will be rather interesting to see what (if any) impact the launch of these regional news services has on the format/presentation of Nine News as seen in major metropolitan markets.

Presumably, Northern NSW/Gold Coast maintain the status quo? If so, that’s probably the right way to go for those markets.

do you think Nine will air the metro bulletins on Go! or GEM as an alternative for viewers who would prefer to watch the live bulletin?

That would be a good idea! 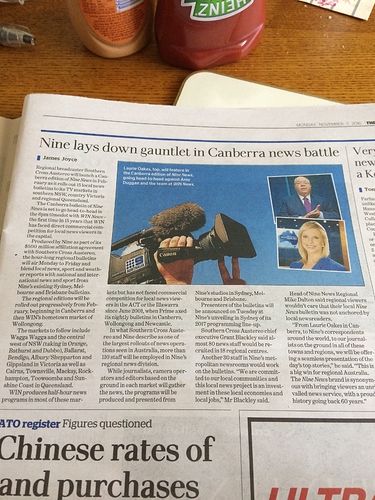 Article in the Canberra Times about channel 9 is going to be producing a Canberra Bulletin of Nine News in February as well as the regional markets of Wagga Wagga, Wollongong, NSW Central West (Orange, Bathurst and Dubbo), Ballarat, Bendigo, Albury/Shepparton, Gippsland, Cairns, Townsville, Mackay, Rockhampton, Toowoomba and Sunshine Coast. These bulletins will be starting in February next year and will be produced out of the Nine Studios of Brisbane, Sydney and Melbourne. This to me sounds like they are going to compete against WIN News as these bulletins will be an hour long

Shame that Mildura is still missing out.

– It also occurred to me, do you think Nine will air the metro bulletins on Go! or GEM as an alternative for viewers who would prefer to watch the live bulletin?

I would love for that to happen, but highly doubt it will.

At least there’s 9Now streaming/catchup for those interested in seeing Nine News Sydney/Melbourne/Queensland in it’s entirety!

Although personally, if I lived in a regional area I would probably prefer a well-produced composite hour of local/state/national/international content rather than irrelevant capital city content such as the traffic pileups and suburban shootings which dominate Nine (and Seven) News Sydney these days.

Don’t get me wrong, Nine’s 6pm bulletins are decent productions but they’re intended for a capital city audience. I suspect that viewers living in regional areas like Wagga, Dubbo or Bathurst really couldn’t care less about local Sydney news, as much as it may be relevant to me as a Sydneysider.

I think it would be Corey Norris or Mark Macgugan for sports.
Veteran newsreader Jo Hall is a perfect choice.

What roles did u propose these are for?

What happened to him.

He was the face of Sports Tonight at one stage!

I did post about the regional news announcement hours ago in another thread, but appears to have got lost in translation

I think it’s great that SCA are finally investing in weeknightly news bulletins across their markets, in conjunction with Ch 9. It also adda competition

However, some issues I see with this:

•7 Local News dominates regional QLD & has been there for years.

•Prime7 dominates regional VIC (their strongest market), but more importantly Ch 9 / Ch 10 affiliates have always rated poor in that market for some reason.

So it’ll be very hard for SCA Nine News to make a break through these markets & what impact it’ll have on Prime7/7 QLD and WIN programming and news, will be interesting.

NB/
I think Canberra (and less so Wollongong) will be the best chances that SCA Nine’s got?