Arguably the toughest ratings battleground, fought out every weeknight, is for dominance in TV news ratings.

This year the 6pm rivalry between Seven and Nine was as tight fought as ever with the prize the best lead-in each night to prime time viewing.

In the 2016 ratings survey just completed the best performer was Seven News across the five major metropolitan markets. As an added bonus, and despite the downward trend evident for most of this year’s ratings, Seven’s 6-7 pm timeslot increased its audience over the previous year’s results in all markets.

However, Nine News was still the top bulletin across the east coast with its best markets continuing to be Sydney and Melbourne where both achieved 52% of the 6pm news market. Brisbane was again the closest market with Nine snatching the number one spot in South East Queensland by just a few thousand viewers.

Meanwhile, Seven made its biggest inroad into Nine’s audience share in the Melbourne market where it achieved an impressive 14% audience gain. In Adelaide, 59% of the 6pm news audience chose Seven representing a gain of five per cent on 2015 numbers while Seven’s domination out west saw it achieve a 70% share at 6pm in Perth, up two per cent year-on-year.

Nine lost the most ground in Brisbane, down 12% and Perth, down 13% with a new studio in the western capital failing to arrest the audience decline.

Change in average audience from 2015

Results for other network news services showed that Ten’s 5pm bulletin fared the worst of any, averaging a twelve percent decline year-on- year with the Sydney bulletin down 20%. If all viewers watching one of the four major network news bulletins were added**, Ten had 15% of that audience, down from 16% in 2015. Ten’s best result came in Perth where the 5pm bulletin rated third with 84,000 or 20% of Perth’s news watchers, down just two per cent.

ABC saw its audience down an average of five per cent nationally. The network’s 7pm bulletin took out the number two place in Perth (101,000) as well as Adelaide (90,000) where the South Australian bulletin bucked the downward trend with five per cent more viewers than last year. 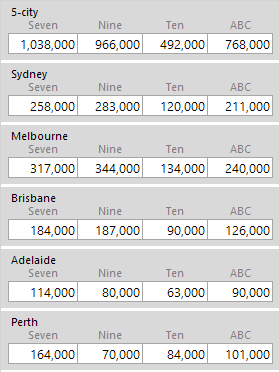 See Ratings Year 2016 to discuss these ratings numbers in the Media Spy forums.

Data © OzTAM Pty Limited 2016. The Data may not be reproduced, published or communicated (electronically or in hard copy) in whole or in part, without the prior written consent of OzTAM.

*Note: Seven’s 6-7pm hour in Adelaide and Perth consists of Seven News plus Today Tonight.
**Total for bulletins of Seven, Nine, Ten and ABC News.
*** The Olympics had very little effect on the above numbers especially in the eastern states.

Data © OzTAM Pty Limited 2016. The Data may not be reproduced, published or communicated (electronically or in hard copy) in whole or in part, without the prior written consent of OzTAM. “Overnight” figures include “Live” (programs broadcast during the 2am-2am broadcast day) and “As Live” (programs recorded and then watched within the same broadcast day). “Consolidated” figures include Live, As Live and “Time Shift” (programs recorded and then watched within seven days of the initial broadcast).