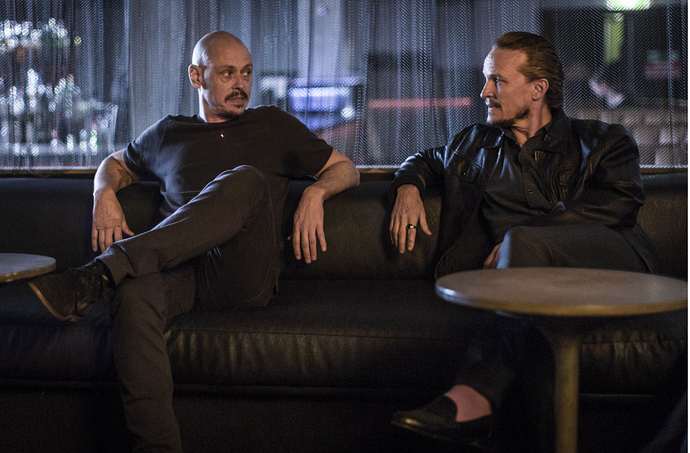 The series is inspired by the critically acclaimed feature film The Magician , written, directed and starring Scott Ryan who introduced audiences to the very funny and very dark world of hitman “Ray Shoesmith”. Originally shot over ten days at a cost of AUD $3,000, Ryan met filmmaker Nash Edgerton who took on the project as editor and producer along with Michele Bennett . Receiving further funding, the film was released in 2005 and went on to be nominated for a Film Critics Circle of Australia Award and an Inside Film (IF) Award.

Ryan reprises the role as charismatic, yet volatile hit-man “Ray Shoesmith”, and also serves as the series writer. Driven by dark humour and off-beat conversation, the series follows Ray as he navigates his chilling business, while also maintaining friendships, parental responsibilities and a fledgling romance. Tough roles to juggle in the modern age and even harder when you’re a criminal for hire.

The idea of taking “Ray Shoesmith” into a television series context took 14 years for Scott Ryan to realise.

“To have Mr Inbetween finally made was incredible and a relief,” said Scott Ryan. “In the series we wanted the audience to question whether they like him or not and that was a challenge in the writing, and would be a challenge for me as an actor when it came to capturing that in my performance,” he adds. “Mr Inbetween has all kinds of elements, it’s not just funny, it’s not just violent; it’s like a three course meal, you’re getting a bit of everything within his morally complex, dangerous and funny world.”

“I couldn’t be more excited to share with the world, Scott Ryan’s wonderfully dangerous character, “Ray Shoesmith” and see him come to life once again,” Edgerton said. “Scott is a very talented writer and actor with a great natural ability, and he’s able to tread that line of being really charming and really scary at the same time. That’s what I loved so much about the character when I first saw The Magician and why I was interested in exploring the character further.”

“ Mr Inbetween is an extraordinary achievement for Scott Ryan, who took it from an indie film with a cult following to a half-hour drama that he stars in,” said Eric Schrier, President of Original Programming for FX Networks and FX Productions. “Scott is one of those rare creators who can bring his own character to life on screen, and he is perfectly paired with Nash Edgerton, who brilliantly directed all six episodes. This project is a great inaugural step with Foxtel as we build Showcase as the destination for FX’s Original Series in Australia.”

Mr Inbetween is produced by Michele Bennett ( Chopper, The Magician ) and executive produced by Nash Edgerton, Jason Burrows and Scott Ryan and is a collaboration between the Blue-Tongue Films collective (The Gift, Wish You Were Here, The Square) and Jungle Entertainment (No Activity, Here Come the Habibs,The Moodys) , with funding support from Screen Australia and Create NSW and has been developed with the support of FX Networks in the US.

The drama has been renewed for a second season after the first two episodes were shown.

MR INBETWEEN STRONG-ARMS ITS WAY TO A SECOND SEASON

New Half Hour Drama Series is Renewed by FX in the U.S. and Foxtel

Created By and Starring Scott Ryan, Directed by Nash Edgerton

Mr Inbetween , the new Australian drama series created by and starring Scott Ryan as the criminal-for-hire “Ray Shoesmith”, has been renewed for a second season by FX Networks and Foxtel, it was announced over night by Eric Schrier and Nick Grad, Presidents of Original Programming for FX Networks and FX Productions, and Brian Walsh, Executive Director – Television, Foxtel. The second season will premiere in 2019, broadcasting day-and-date on FX in the U.S. and Foxtel.

“It’s been fantastic to see Mr Inbetween embraced by fans and critics. The exciting, offbeat and fast moving first season is defined by the magnetic performance and creative vision of Scott Ryan and director Nash Edgerton,” said Schrier. “Our thanks to Nash and Scott, our partners at Foxtel, fellow executive producer Jason Burrows, producer Michele Bennett, and the great cast and crew. We can’t wait to return to Ray’s world in season two of Mr Inbetween .”

Mr Inbetween currently airs on Foxtel’s showcase Mondays at 8.30pm, premiering two weeks ago with its final episode of the first season on Monday October 29 at 8.30pm.

The series was shot in Australia and produced by Blue-Tongue Films and Jungle Entertainment, in association with FX Productions, Screen Australia and Create NSW. Ryan, Edgerton and Jason Burrows are Executive Producers and Michele Bennett is Producer.

With the hit Aussie series returning to our screens, here’s who joining our favourite hitman Ray Shoesmith (Scott Ryan) for season two.

The AACTA Award for Best Lead Actor in a Television Drama goes to Scott Ryan for MR INBETWEEN. #AACTAs https://t.co/Ghc7NmQFEQ

Just finished season one. Intended on watching only one or two episodes but ended up staying awake until 2am binging the whole thing. Piss-funny with solid writing and acting. Looking forward to getting around to season two asap.

Scott Ryan will be back for a third season as hitman and dad Ray Shoesmith.

CONFIRMED FOR THIRD SEASON ON FOXTEL

Foxtel is proud to announce the critically acclaimed Australian half hour series Mr Inbetween , created, written by and starring Scott Ryan as the criminal-for-hire “Ray Shoesmith”, will return for a third season on FOX SHOWCASE.

Ryan will reprise the role of charismatic, yet volatile hit man “Ray Shoesmith”, a role which earned him an AACTA Award for ‘Best Lead Actor in a TV Drama’ and a TV WEEK Logie Award for ‘Most Outstanding Actor’ in 2019.

Ray Shoesmith “takes care of people” — collecting debts, relieving them of drugs and guns, and often taking care of them on a more permanent basis. Ray demands respect and does not tolerate it when someone disregards his very clear code of ethics.

Mr Inbetween is finally crossing the pond. FOX UK has secured the UK rights to both seasons of the FX original comedy series. The series will premiere on FOX UK on Thursday October 29th at 10pm.

FX has revealed Mr Inbetween will end with the upcoming third season. It will premiere in the US on May 25 (Australian airdate to be announced later). 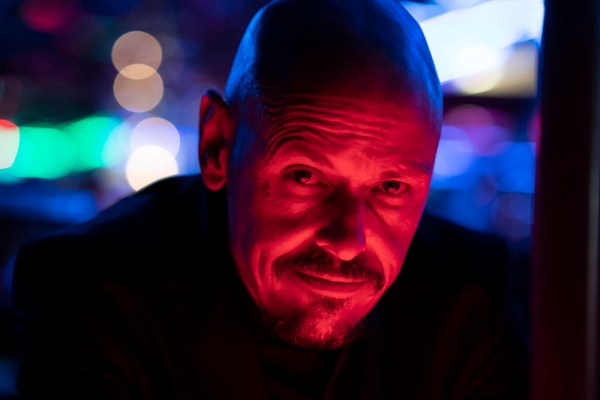 The upcoming third season will be the last for FX’s Mr Inbetween. FX has opted not to pick up a fourth season of the Australian drama series, created by, written and starring Scott Ryan and d…

Watch On Demand and on FOX SHOWCASE

The third and final season of FOXTEL Original series Mr Inbetween will screen from Wednesday, May 26 at 12 Noon express and 8.30pm AEST encore, available On Demand and on FOX SHOWCASE only on FOXTEL.

The nine episode season of Mr Inbetween –the critically acclaimed half-hour series created by, written and starring Scott Ryan and directed by Nash Edgerton –will debut with the first two episodes, with one new episode airing each subsequent week.

Foxtel’s Executive Director of Television Brian Walsh said: “ Mr Inbetween is a testament to the world class drama our customers have come to expect of FOXTEL.

Driven by the incredible talents of Australian creator/writer/star Scott Ryan and director Nash Edgerton, this engrossing third and final season is sure to engage audiences once again, as Ray Shoesmith takes care of business once and for all. It joins the proud collection of quality, popular Australian drama series that have become the hallmark of the FOXTEL brand.”

Juggling parental responsibilities, complicated relationships, a viciously smart pre-teen daughter and an ageing parent while earning a living would be difficult for anyone, but it’s particularly tricky when you’re a criminal for hire.

Scott Ryan returns as Ray Shoesmith, the role which earned him an AACTA Award for ‘Best Lead Actor in a TV Drama’ and a TV WEEK Logie Award for ‘Most Outstanding Actor’ in 2019. Ray ‘takes care of people’ –collecting debts, relieving them of drugs and guns, and often taking care of them on a more permanent basis. Ray demands respect and does not tolerate others disregarding his very clear code of ethics. As Ray’s increasingly volatile work collides with his imploding personal life, he finds himself struggling to stay atop the complex web he has woven.

In season three of Mr Inbetween , Ray’s world has contracted. Family life looks a little different as he quietly mourns the loss of his brother Bruce, while figuring out how to care for his ageing father, Bill (Kenny Graham). As Brittany (Chika Yasumura) grows into a young woman, she draws further away from Ray and comes closer to discovering the truth about who he really is. Things seem good with Gary (Justin Rosniak) and Dave (Matt Nable), however since severing ties with former boss and confidant Freddy (Damon Herriman), Ray is working freelance and feeling a sense of isolation. With business booming, a new connection with criminal kingpin Rafael (Jeremy Sims) intensifies Ray’s struggle and when sparks fly with new colleague Zoe (Emily Barclay), an unexpected tragedy makes Ray question both his career trajectory and his ethics.

Fellow underworld figures dub Ray ‘The Magician’ for his uncanny ability to make things disappear. As his family crumbles, emotions rage and violence escalates, the blood on his hands may finally cause the magic wand to slip.

The series was filmed in Sydney and is produced by FX in association with Blue-Tongue Films and Pariah Productions.

FOXTEL Original series Mr Inbetween Season 3 premieres Wednesday, May 26 at 12 Noon express and 8.30pm encore AEST On Demand or on FOX SHOWCASE only on FOXTEL. Season one and two are available to watch now On Demand.

"Nobody really wanted me to be in the show" | TV Tonight 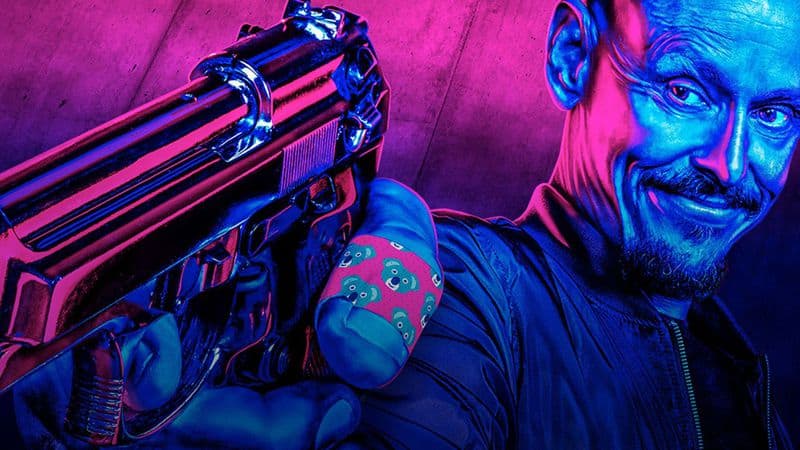 “I have had enough of him”: Scott Ryan on ending Mr Inbetween

The third and final season of the Foxtel Original series Mr Inbetween will begin screening in Australia from Wednesday, May 26