4BC for breakfast, and then over to 4BH for music rather then the relays of 2GB after breakfast.

4BC is mostly local on weekdays, as well as on weekend mornings these days. They still carry Ray Hadley in the morning, as well as Money News & John Stanley on weeknights, as well as Mid-Dawns.

I agree with your predicted share for SENQ, although maybe you are somewhat generous. I was just looking at the Sydney results - every shift and every age group starts with a 0.something share.

As we have “rolling” surveys, I believe that some of Survey 4 will be included in Survey 5’s results.

This could artificially inflate SENQ’s result in Survey 5.

Can anyone confirm this?

And I thought CADA was a government program that provided rent assistance to low income households.

BTW the expensive rebrand to make CADA a national brand is failing dismally. Very low numbers in all markets except Sydney.
Perth even scorning asterisks.
ARN should have kept the Edge 96.1 as it was and not wasted their money.

I guess it depends on what happens outside radio though. They could be like SEN that put out things make it look like they pay scant attention to their decimal-point ratings, “but just look at our record podcast numbers!!!¡”.

Wouldn’t exactly be surprised given the DAB spectrum is essentially free-ish and, y’know, ARN don’t believe they’re a radio company anymore, especially as barely anyone of Cada’s target market would listen to linear radio anyway.

Also, if ARN isn’t putting in any to push people to Cada… only the Sydney people who listen to it through 96.1 (and have clung on since the “9inety6ix.1” days… ugh

) would know what it even is. That was the case with The Edge Digital and will be the same here.

It does make you wonder what could be better done with 96.1 itself though, but I couldn’t see any other metro incumbent do anything different, and ARN obviously doesn’t want to sell to see that possibly happen. I did ponder whether someone like a WIN could relaunch it as a local-ish station, a “One FM redux” of sorts, following the style of C91.3 - but the temptation for it to be a gateway for WIN into the entire western Sydney market would be too strong - which is probably why ARN will hold on to 96.1 for dear life.

Not to mention that even a radio station that would rate a 2-ish (wild guess of the overall listen based on the DAB/net cume, of course only ARN knows this) in a targeted niche would likely be better from an ad money perspective for the whole Cada “project” than nothing at all. 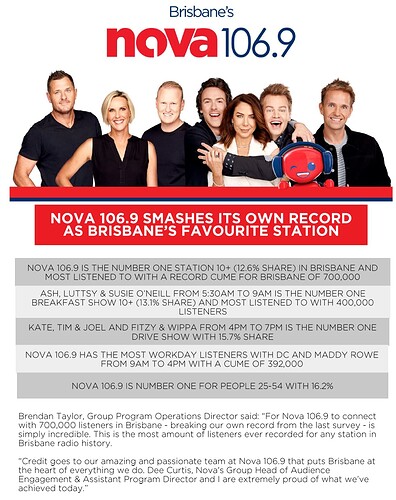 Probably at least 5% for CADA. C91.3 would also have a chunk of the other FM and the rest probably community radio.

As we have “rolling” surveys, I believe that some of Survey 4 will be included in Survey 5’s results.

This could artificially inflate SENQ’s result in Survey 5.

Can anyone confirm this?

Correct. Survey 5 runs May 22 to Jun 25 & Jul 10 to Aug 13. So Brisbane figures next Survey could be interesting, as I imagine 4KQ will still show up, as well as SENQ.

Probably at least 5% for CADA. C91.3 would also have a chunk of the other FM and the rest probably community radio.

Yeah my household is a frequent C91.3 listner. It is a great station with heaps of live shifts.

I don’t recall any station apart from Mix 94.5 going above 15% in Perth in the last 20 years or more. Incredible result for Nova.

Usually they take them out of the ratings for a survey (if it’s not summer break), so S5 should have nothing, S6 will have SENQ.

That’s what happened in S8/2020 in Sydney when 2CH was replaced with SEN (right at the end of S7), for instance. 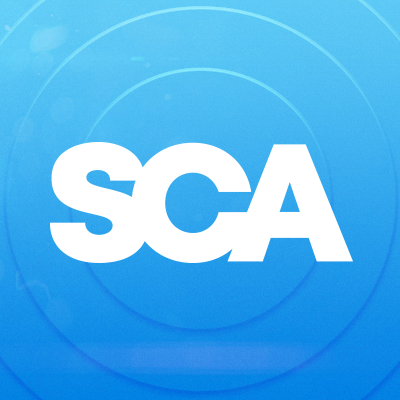 @SCA
Record-breaking results today in radio ratings #4 for the year. SCA metro has achieved 5.77M+ listeners each week, our highest ever audience. And we're #1 again for People 25-54. Congratulations to all our teams across Australia. Read more here: bit.ly/3unJ1g2 https://t.co/LfjEKlndrd 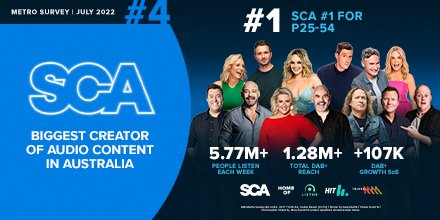 I’d probably do the same, but interesting how all stations put a good spin on the ratings no matter where they end up. I guess having a national network helps. I guess in the old days it would be different, certainly behind closed doors might be different.

Probably at least 5% for CADA.

Nah mate unfortunately you have missed the mark here. 5% or there abouts maybe for The Edge, however after losing Mike E and Emma they would be lucky to still have half of that audience.

I didn’t know it was survey day.

Having a look through Sydney. Smooth FM has a cume of 1.27 million. Is this an Australian record? I can’t remember any station ever reaching that (Maybe Fox years ago?). Congratulations to the team there. At SCA. Both Triple M and 2Day are not healthy. Looks like 2Day beat Triple M across the day again.

I agree with SEN in Brisbane. Next survey they’ll be well below 1.0 share. Just look at 1170 in Sydney.

I think you’ve missed the mark. 100k listeners on DAB shows that in Sydney it is still very strong.

But thanks for your insightful contribution.

KIIS - What a powerhouse result and driven by K&JO who are phenomenal with 13.3 … their biggest ever rating in any breakfast? Like them or loathe them … they know their audience and give them what they want. And sooooo Sydney. Would KIIS have the biggest cume and possibly the highest revenue of any one radio station in Oz?? In my nostalgic moments i still like to think of this station as the “New New 2UW”.

ABC Sydney - crashing and burning as the talent drains away and the station continues to slide into beige mediocrity. Like much of the ABC generally these days. Was rating >12 last year and now <8.

2UE - the little engine that could. Unloved by Nine before its ACE lease out (and badly abused by Macquarie before that) … the grand old dame of Sydney has a spring in her step and slowly but surely clawing her way back up. 3.3 is a new high for this incarnation. So Glad that ACE has correctly kept the branding as Easy Music 2UE while continuing to broaden the music appeal. Strong audience engagement (eg 2UE easy music panel) reaping justified rewards.

2Day/2MMM - still flops despite the nauseating SCA spin. The polar opposite of ARN … SCAs lack of audience intelligence with Sydney listeners continues seemingly forever. SCA is contemptuous of Sydney and get the results they deserve. But they think they are so clever and obviously know best right?

2GB 4-7pm - in a sea of success this day part remains a barnacle on the good ship GB. Covers the majority of Jim Wilson’s drive + the mundane sport hour thing. How long can 2GB keep tolerating rating 6th in this shift? From 6.8 in Drive jumps to 19.7 in Evenings … must be the biggest difference between consecutive day part ratings in Oz radio. Listening to Luke Grant handle Drive perfectly during the current ratings break … 2GB should keep LG there !!

SEN 1170 - continues to be largely irrelevant and an embarrassment in Australia’s most populous city.

Would KIIS have the biggest cume and possibly the highest revenue of any one radio station in Oz??

Can’t have biggest cume. Both Nova 96.9 and Smooth 95.3 out do them in Sydney. They are equal with network sister station Gold 104.3 in Melbourne.

SEN 1170 - continues to be largely irrelevant and an embarrassment in Australia’s most populous city.

1170 is a Sydney station not Melbourne

And I thought CADA was a government program that provided rent assistance to low income households.

Some of their presenters sound like they have just stepped out of the hood.

Probably at least 5% for CADA.

No chance, probably around 1-2% at the very most. The old Edge 96.1 would have rated higher.