Here are the overall ratings in ranking order.

Waiting to see how SCA spins the ratings disasters of 2DAY and 2MMM.

Also interesting to see the decline of smooth in Melbourne. After it was, or close to #1 FM there.
Especially with its ascent in Sydney

Also interesting to see the decline of smooth in Melbourne. After it was, or close to #1 FM there.
Especially with its ascent in Sydney

Waiting to see how SCA spins the ratings disasters of 2DAY and 2MMM. 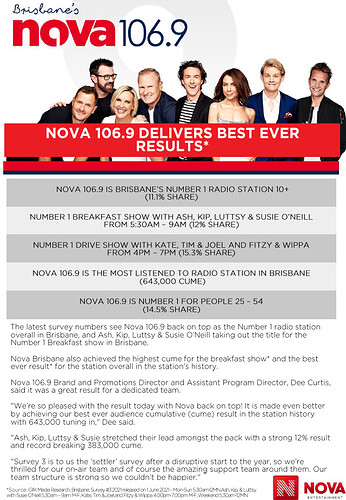 Sydney
2GB continues to drop. Now with striking range for ABC, smooth or KIIS to claim the overall #1 spot.
Nova’s mornings are terrible, though no change from the previous survey. Overall there appears to be a strong preference to softer, older music after breakfast with smooth and WSFM pickup solid numbers from 9am.

Melbourne
I missed it last survey, but Nova are doing well compared to recent times now essentially matching Fox who traditionally have had the stronger ratings. Gold still clear #1 FM, but neck and neck with Fox and Nova at breakfast.
Big jump up for KIIS breakfast, possibly due to the extra publicity from PJ leaving. It will be interesting to see if this sticks at the show changes this month.
Triple M continuing downward with Marty at breakfast, but the recent ad campaign may help next survey - it probably started too late to have much effect on this survey.

Brisbane
Despite some movement the 4 FMs are still really tight, with 4KQ hot at their heels despite a slight drop. 4KQ equal #2 at breakfast with ABC. 4KQ clear #1 on the weekend. This performance by an AM really highlights the gap left by the FMs.
4BC also becoming competitive at breakfast.

Adelaide
Drops at SAFM, but gains at Triple M will have emotions mixed at SCA today. Otherwise not a lont of change.

Perth
Today’s most boring result. Essentially nothing as happened - small changes are really only rounding errors until you look at the demos.
Gains for the 18-39s at Nova at the expense of Mix and Triple M - this shows the real impact of the changes at SCA.

Ugh 97.3, when will the penny drop that something needs to change with the music.

Unfortunately for ARN the clear space for 97.3 is to move closer to a WSFM/Gold format which would seriously step on the toes of 4KQ.
I know some will argue that smooth would be a better way to go given Nova’s 50% share, but the agreement is that ARN run the station and ARN won’t be able to pull it off as well as Nova do. A smooth format also wouldn’t fit within their existing national formats so it won’t happen.

Good to see that for the first time in many years, we might have some serious competition for the title of Sydney’s #1 breakfast radio program. Personally I hope Robbie Buck & Wendy Harmer can finally get over the line and outrate 2GB in the near future, as 873AM has had it too good for too long!

Elsewhere Smooth and the ARN stations should be reasonably happy with their Survey #3 performance, but 2DayFM’s ratings are embarrassing. Unfortunately I can ​see The Morning Crew with Hughesy, Ed & Erin soon meeting the same fate as Grant, Ed & Ash because 3.3% just isn’t a sustainable figure for a major commercial FM station at breakfast.

SEN 1170 = the new Macquarie Sports Radio. Think that just about sums up their ratings performance!

Perhaps they need to promote it.

Exactly this. While I doubt the Nine Music stations will ever win a market, I personally think 2UE at least can do some damage to the ratings of Smooth/WSFM with some effective promotion - especially if TV ads were to air on Channel Nine in key timeslots such as during their top rating Sydney 6pm news.

Pretty much. By and large WSFM performs OK (afterall, 101.7 has been among the Top 5 stations for some time now), but probably isn’t focused on as much by ARN ​due to 106.5 likely being seen as their t​op Sydney station.

Of course this is understandable when KIIS is pretty much a radio station built around Kyle & Jackie O. But even back in the dark days of Mix 106.5, I think ARN threw more resources/promotional weight at that station compared to what WSFM received.

I think ARN threw more resources/promotional weight at that station compared to what WSFM received.

I think WS FM, had 2WS which was a pretty successful on the AM Band, where MIX was a “brand new station” , it had no real link to the old 2UW. So I think the 106.5 FM was always the “new FM station” thus more $$$ spent however WS could look after itself as it was just straight conversion from AM so not as much of a marketing budget was needed. So agree with @SydneyCityTV .

Bloody fantastic result for X Digital. I’d be pleased to have a cume of 3,000 despite ceasing transmission days before the survey period.

Would be disappointing for RSN Extra not being able to replicate that success.

When are all these big radio bosses going to realise that with music stations people just want music and not drive content. Millions of dollars are spent to expensive drive programs and the 2 FM ratings winners are Gold in Melbourne and Smooth in Sydney. Both with 1 announcers. Triple M best of Marty, Kennedy, Rush Hour. DMG KTM, and so on.

They just need to increase the music variety

When are all these big radio bosses going to realise that with music stations people just want music and not drive content.

Millions of dollars are spent to expensive drive programs and the 2 FM ratings winners are Gold in Melbourne and Smooth in Sydney. Both with 1 announcers. Triple M best of Marty, Kennedy, Rush Hour. DMG KTM, and so on.

All-music stations are fine. But you can’t leverage sponsorships, promotions off of all music like you can a drive show. Look at Nova’s drive show which has just gone to New Zealand for a week. Cash raked in for the company. Content for radio and online. That’s radio in 2021, like it or not.

Seven News Sydney only had a brief RVO about the Survey #4 results during tonight’s bulletin - note the old Smooth 95.3 and the dodgy custom “ABC Radio Sydney” logo in cap #2! 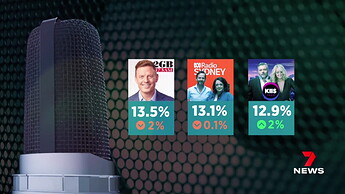 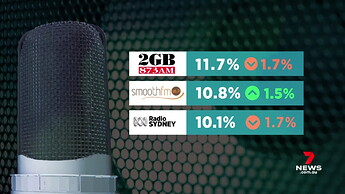 Not a word was muttered about the radio ratings on Nine News Sydney (at least from what I saw), probably for reasons that aren’t hard to figure out why…

Coming first in the ratings is nothing to be embarrassed out. Nine News Sydney should have mentioned 2GB’s win … even though they did shed listeners.

It’s now a year since there were posts on Mediaspy stating that 2SM would be back in the ratings. I wonder what happened.

Someone was making it up?

Gold and Nova shared the top spot in Melbourne breakfast.

FM at least. 3AW and ABC Radio Melbourne outrate them both.

Agreed. It’ll be rather interesting to see what approach Nine News Sydney take if/when Ben Fordham gets knocked off top spot in the radio ratings, that’s for sure!