…then what’s the point of making the thread before they’re released?

Gives me time to get the popcorn ready!

Just enough time to make a coffee before 9:30.

I wouldn’t be putting champagne on ice if you’re expecting to celebrate a 2Day FM breakfast show podium placing.

Still great results for AW, bfast over 20%, morning just under.

Magic 1278, despite the lowest overall share of the three Nine music stations still has over double the share of 3MP:

96 and MMM both had poor surveys.

MMM didn’t set the world on fire, but it is their first survey.

Duncan will be onto Gary and Daniel for better results. 96fm really needed to do better. Perhaps that will happen with Botica “retired” again and Clairsy on bfast bringing the average age down a few a decades?

6PR went up slightly, perhaps they have engaging election content? State election is this weekend.

Almost back to normal in Melbourne with FM stations pick up listeners at breakfast (in particular Fox, Nova, KIIS and Gold), as more people returned to work.

What’s going on with 3AW evenings? Quite a drop. Perhaps they need to pull Phil out of retirement or network John Stanley from Sydney. He’s going gangbusters on 2GB.

A good result for 2UE. It can only go up further, I think.

Quite interesting results particularly in Sydney and Perth.
Firstly Perth, I am quite surprised Mix 94.5 did so well in this survey considering the negative comments about the changes and the inconsistencies in the music. I was expecting it to bomb massively.

2day fm breakfast up and KIIS breakfast down and down across the day. We are now back to having a crowded three CHR / Hot AC market in Sydney with 2day re entering this market. Nova has won the youth back from KIIS.

It will be interesting to see in surveys to come whether 2day can build further at breakfast or if this is a once off.

Here’s the actual Melbourne rankings with some brief thoughts: 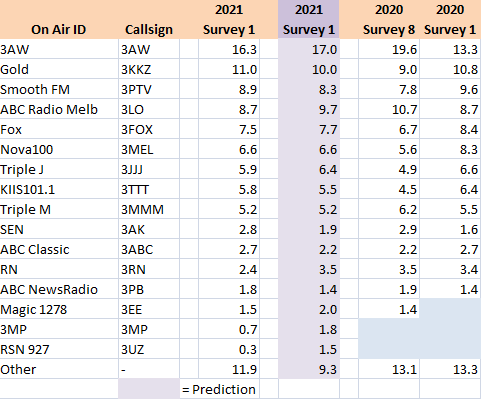 Sydney
No real change at 2DayFM, but what can you expect so early?
Slow start for SEN, but at half of Sky without any real sport this survey they should be happy and have an achievable target in sight.
Big drops at KIIS, and gains at ABC Sydney. Unlikely too many have made that move so could be a sign that the market is moving around. This has made way for Smooth to be back at #1 FM overall, but KIIS are still #1 FM at breakfast by a long shot.

Melbourne
A slow start for 3MP but not bad considering they’ve had to find an audience from scratch.
FM’s up as expected with the COVID situation improving.
No substantial changes, but the change at Triple M Breakfast appears to have helped Gold and KIIS.

Brisbane
The 4 FMs remain neck and neck with Nova still hanging onto #1 by a whisker.

Adelaide
Tough times for Ben and Liam at Nova. SAFM now ahead of Nova at breakfast. This is SAFM’s best survey in a long time.
Gains for Mix at the expense of Triple M.

Perth
Gains for Mix, a slight drops for 96FM, Nova and Triple M. SCA will be happy with this as it suggests that some of the Hit92.9 audience have successfully moved to Mix. Triple M numbers not bad compared to Hit92.9 being a different format. It appears there’s enough interest in the new format to keep or gain listeners and they can continue to work on middle-aged Male audience of 96FM and Nova.

3AW and 2GB are the clear number #1 radio stations in Melbourne and Sydney after recording their best GfK Survey 1 results in more than a decade. Across Australia Nine’s talk radio stations (3AW, 2GB, 4BC & 6PR) have also grown their audience by 6.4% year-on-year and retained their #1 position in the key 40+ demographic with a 28.1% share.

Greg Byrnes, Nine Radio’s Head of Content said: “This survey proves that 3AW and 2GB are the “must listen” radio stations in their cities. We are way out in front as #1 and the audiences are getting even bigger. More than 100,000 new listeners are turning in each week when compared to a year ago.
“Ben Fordham in Sydney and Ross and Russ in Melbourne have again recorded stunning results while in Perth, Gareth Parker has grown the 6PR Breakfast audience by 26% year-on-year.

“Right across the country talk audiences are growing stronger year-on-year, with more and more people turning to us for live and local news and opinion.”

The results around the country are:

2GB 873 is the clear leader in Sydney – #1 across Breakfast, Mornings, Evenings and Weekends recording its 131st consecutive survey win, with an 14.4% audience share (up 1.2 points year-on-year). This is 2GB’s best Survey 1 result in a decade.

• The Ray Hadley Morning Show remains dominant in Mornings. Survey 1 saw the show recording an audience share of 16.1% and three points clear of his nearest competitor. This is Ray’s 131st consecutive win.

• Afternoons with Deborah Knight continued its strong performance, with an audience share of 11% (up 1.6 points year-on-year).

• Nights with John Stanley leaves daylight between him and his competitors with an audience of 24.4% (up 5.2 points year-on-year), well ahead of its competitors (time adjusted).

• 2GB Weekends (including The Garden Clinic, Chris Smith, The Two Murrays and Saturday Night Live with Stevie Jacobs) continues to grow with its audience share at 14.8% (up 2.4 points year-on-year).

• 3AW maintains its dominance in Melbourne – #1 across Breakfast, Mornings, Drive, Evenings and Weekends. In Survey 1, 3AW recorded an audience share of 16.3% (up 3 points year-on-year).

• Neil Mitchell is the clear dominant leader in his timeslot. 3AW Mornings recording a 19% share (up 4 points year-on-year) (time adjusted).

Brisbane’s 4BC 1116 return to local programming continues to see audience improvement posting a share of 6.7% among all people 10+ in Survey 1.

What’s going on with 3AW evenings? Quite a drop.

If that drop is sustained for four or five surveys, it would be a worry, usually an anomaly. Denis usually does well at night and his first year of surveys at night showed an improvement on the disgraceful Macq Media destruction of AW Nightline.

Possibly the simply explanation is that the people who tuned (primarily) into talk stations for COVID updates, simply stopped listening to radio, hence the music stations took a greater share

Thanks @Rob_Melb_AU for insightful commentary.

These stations all make it clear - minimal promotions = minimal awareness/ratings

Correct and ignored by stations. Crocmedia need to address this for both their main Sydney stations SEN and 2CH.