Australia’s leading forum for media analysis and comment, presented by one of Australia’s most respected journalists Paul Barry

Based on the following programming Media Watch must finish up for the year before 28 November.

Updated graphics and all in HD now.

A statement by the Press Council Executive Director:

A segment in the Media Watch program on 27 March 2017 entitled “Paparazzi, privacy and the Press Council”, focusing on the Press Council’s Osher Günsberg/Daily Mail adjudication, contained a significant factual error and omitted some important background material.

Importantly, the program omitted all reference to Mr Günsberg’s public statements that he was very happy with the result of the Press Council’s process and had no complaint about the Daily Mail’s “punishment” being lacking. Links to these statements are available at http://www.pedestrian.tv/news/entertainment/osher-on-the-mail-shaming-his-bod-everyone-has-a-r/b44a0ce0-4e22-4445-84db-ae9e10cd6659.htm and https://www.imediaethics.org/au-bachelor-host-complains-fat-shaming-bali-belly-story-press-council-rules/

The program also offered no acknowledgement of the benefits of the broad publication of an Adjudication, and specifically in attaching it to the article complained about, in promoting responsible journalism. The way the Council publicly calls out poor practice of an individual publication has a powerful educational effect on all publishers, editors and journalists, who are placed on notice about what is expected of them. The vigorous manner in which publishers defend their actions during the Council’s process strongly suggests that they take this seriously, and do not wish to be seen by their peers or by the public as falling short of the acceptable standards of practice in the media industry.

Prior to airing of this segment, the Press Council provided Media Watch with details about the process for publication of Adjudications and alerted it to Mr Günsberg’s public statements, which of course were publicly available. After the program, the Press Council requested that Media Watch correct these matters, but while Media Watch has since included a note on its website about the Daily Mail’s publication of the Adjudication, it has declined to take any other remedial steps.

I believe it is appropriate to issue this Statement because the incorrect impressions created by the program have not been adequately remedied by Media Watch itself, and could lead the public into a mistaken understanding of what occurs during and after the Press Council’s complaints-handling process. It is of the utmost concern that this segment could potentially deter bona fide complainants from availing themselves of the Press Council’s complaint-handling process.

The Media Watch producers must enjoy reading Mediaspy. Tonight’s show included a reference to Bruce Gordon’s ownership of the Crawford’s back catalogue airing on 10 if things go wrong. All your doomsday fantasies come true, those in that camp must be so excited that the ABC has validated their rumour mongering.

Nice idea but I don’t recall them ever mentioning the horror which is about to be inflicted on Northern NSW, and if Gordon gets control of Ten, perhaps the rest of the country…mappy.

I was expecting a lot more of a retrospective of the year tonight with mention of the big media reform legislation and possibly Ten’s administration. All we got were a 4 or 5 funny clips. Yet we again got a story with Allan Jones and Andrew Bolt.

But it was a positive Bolt story (sort of)! And anyway, Milo and Jones have a lot in common I’d imagine. 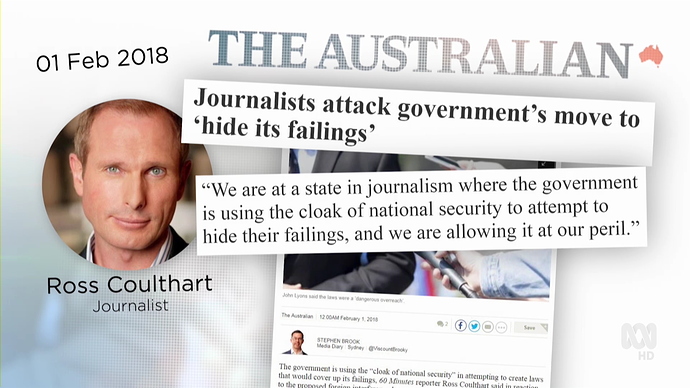 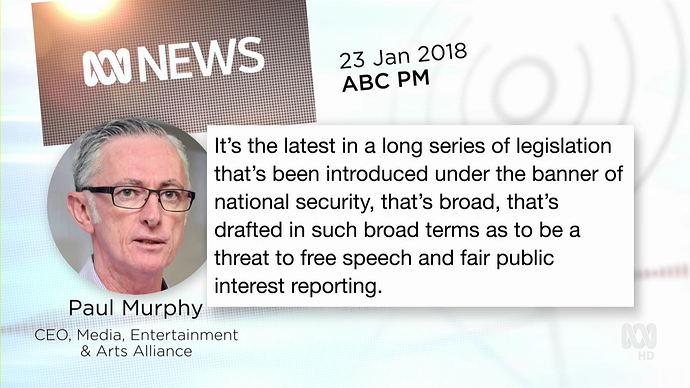 While Media Watch isn’t perfect, I have considerably more respect for that program than almost anything from Tim Blair or The Daily Telegraph.

I’ve noticed that they’ve been using an echo effect on the voiceovers on Media Watch more and more these days.

It seems to be used for almost everything being read out now, whereas previously it’d only be used when the tone of the quote/snipping required it (sensationalist headline, ranting, etc.)

It’s very annoying, I wish they’d tone it down a bit or cut it out completely.

“At Media Watch you don’t make a lot of friends”

Exclusive: In the ABC lift or make-up room, Paul Barry knows all about the cold shoulder.

Thanks for letting us know @SydneyCityTV otherwise I wouldn’t have read it.

I ripped these episodes of Media Watch from a special website for the 20th anniversary show from 2009 and uploaded them to Youtube.

An ep from the Richard Ackland era from 1998, featuring a short-lived intro and theme which only existed in 1998:

The first airing of John Safran’s confrontation with Ray Martin outside his house:

The first episode from Paul Barry’s first stint in the chair in 2000:

…and the interview which got him sacked and the show cancelled for 2001:

An extended interview with Stuart Littlemore. It was specified in the XML file on that web page, but doesn’t actually appear on the website (so it was hidden for some reason). This is probably the first time this full interview has been seen:

Those breathlessly awaiting SCA’s change of SC News in Tas to 7 News have had the issue well covered by MW tonight.

lol, it’s just a cheapo Officeworks printed backdrop now. Just goes to show how the ABC has coped with its funding difficulties over the past 20 years.