In Ulladulla tonight, motel I’m at has BOTH South Coast and Wollongong channels tuned in on all networks.

Motel setup is optimised for Wollongong, antenna is horizontal (Milton Trig TX is vertical), despite Milton being much closer (14km vs 84 km). Milton is still very watchable, though Prime7 can pixelate a bit.

When my parents lived in Shepparton we had two UHF aerials (and a vertical VHF for WIN), one pointed towards Mt Major for the local channels (no SBS then) and the other towards Mt Alexander (in the opposite direction) so that they can watch SBS. The aerials were still there when they moved out several years ago, they ended up getting both Bendigo and Shepparton varieties of all networks when the Bendigo stations were restacked to UHF 28-33.

Its good having network variety … variety is the spice of life after all.

the only differences between Bendigo and Shepp are (1) different commercials (2) different WIN News (and different Prime, oops Seven Local News if and when Shepp is relayed the Albury bulletin (most likely scenario) and Bendigo/Central Victoria gets its own bulletin) and (3) SC10’s Shepp callsign is GLV instead of BCV.

Yeah, ads and Local news are really the only differences, along with different LCN names. Some feeds will also be fractions of a second ahead /behind, but this is only really noticeable if you have Picture in Picture or two TVs. But that’s still enough to make it interesting for me anyway

Almost some Winter time DXing in Renmark, not quite strong enough to decode unfortunately 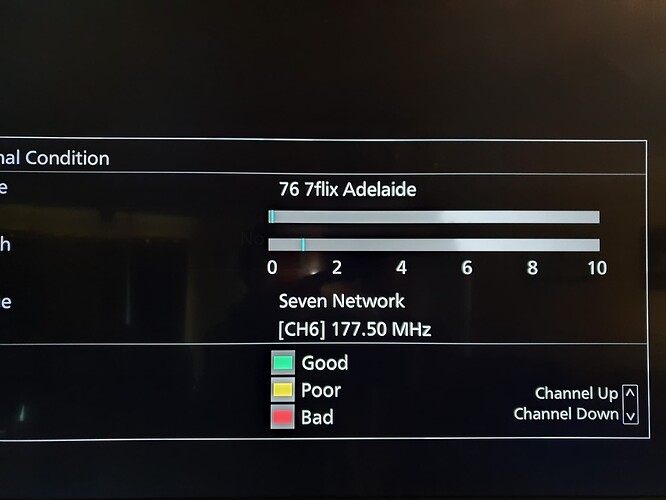 This Thursday, I am going on a holiday to the Gold Coast. I am planning on bringing my personal set top box, USB and portable antenna with me on the plane to my hotel to record content for my YouTube channel “T Boy the TV and Radio Guy”.

My question is, can I receive the Gold Coast and Lismore channels? I am staying in a hotel in Coolangatta, right next to the QLD/NSW border. I will have to retune multiple times though to get the different channels though.

MySwitch says that the Gold Coast/Richmond Tweed channels can be received fine from my location, although I don’t know if it will work as I am pretty sure I am staying on the floors closer to the bottom. If anyone can give me info I will be happy.

You will get UHF from Springbrook and possibly also get Mt Nardi and even Mt Coot-tha if you were high enough and had a good antenna. Springbrook, Currumbin Hill and Tamborine form the Gold Coast SFN

Yeah, down in Cooly you see antennas pointed in any number of directions - Tamborine, Currumbin, Springbrook and Lismore (Mt Nardi), with more than a few legacy setups still aiming for Brisbane too. As has been said above, you should not have any issue with Gold Coast or Lismore TV, and may even get lucky with Brisbane too depending on your height/location.

I’ve stayed at many apartments and hotels in Coolangatta that have both Lismore and GC channels already tuned into the telly. I receive both myself with 2 antennas on the same mast in Banora Point which is about 10 mins south of Coolangatta.

It will also depend on which side of the hotel you are staying, so on your STB you may only get ONE out of Springbrook, Lismore or Currumbin/Tamborine.

Don’t forget to check the polarisation of the signal you are trying to receive. Currumbin for example, the primary service for Coolangatta is vertically polarised.

It looks very possible I could get both Lismore and Gold Coast channels, by using the Gold Coast Southern Hinterland and Murwillumbah transmitter which says that it gets both Gold Coast and Lismore channels.

On that particular transmitter (Murwillumbah/GC Southern Hinterland), am I right in saying it is actually located right on the border so as to be able to broadcast both NSW and QLD feeds of the same channels? From Google it looks like there’s two separate towers, one just either side of the border.

It’s one site - Springbrook but two antennas: the Gold Coast stations have to stay out of NSW and the NSW regional stations can go omni. From memory(its been a long time since I was last there) the omni for NSW regionals is 4 sides of panels and the Gold Coast antenna is 2 sides facing north and east. the transmitters back then were Harris DTV660’s so its only low power ie less than 100W. There are mobiles at the site as well as TV and the boarder actually runs right through the site.

MySwitch says that they are at the exact location.

I am planning on using that transmitter on my holiday, so I can cap Gold Coast and Lismore content.

Will a portable antenna be able to receive both horizontal and vertical signals? I have checked the two transmitters at Springbrook, and it says that the Lismore stations have a horizontal polarisation, while the Gold Coast has a vertical one.

It should work fine for both… depending on what type of portable antenna you have, you just may need to adjust the position of it.

In all honesty, in Coolangatta you may be better going for Tamborine/Currumbin for GC content and Mt Nardi for NNSW content. Especially if you’re further towards Rainbow Bay/Point Danger end of Cooly, you’ll have very good line of sight to the northern transmitters more so than Springbrook. And Mt Nardi generally does very well into that part of Coolangatta.