New topic has been requested. In process of shifting previous relevant posts into this area. If you see any others let me know.

Received all 5 networks from Darling Downs tonight on 29, 30 , 31, 32, and 33. Usually these are totally absent on these frequencies as there as local Brisbane channel relays present. Signal strength was at 10 allowing signal resolution. 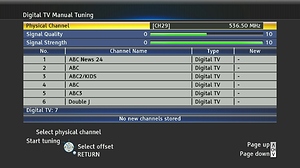 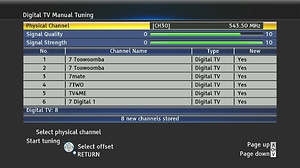 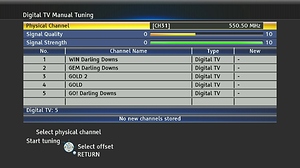 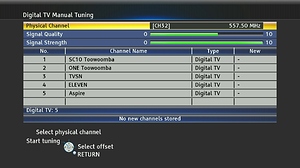 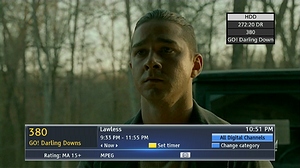 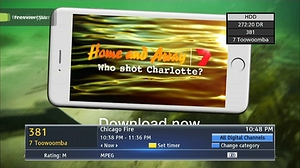 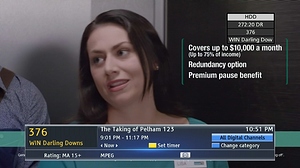 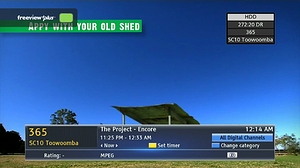 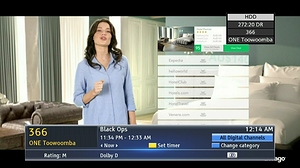 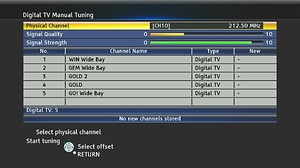 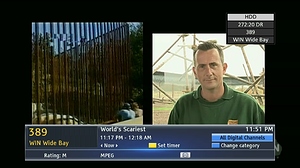 Southern Cross 10 from Rockhampton this morning on Ch 36 with signal strength 10. 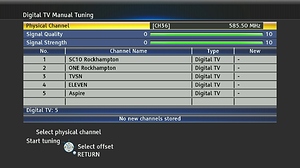 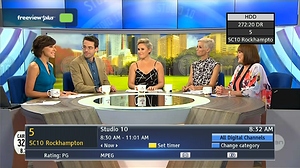 Thanks for the caps, TV Cynic!

I usually find that signal quality is more important than signal strength (I also have a Panasonic HDD receiver which has similar signal info graphics to yours).

eg. During the summer, I get NBN and WIN on UHF 36, with plenty of signal (as high as 10), but no quality due to the co-channeling. Meaning my receiver just gives a black screen.

Yes - I agree re signal quality. The opening to Wide Bay was so good that I was able to get the local VHF channels (6, 7, 8, and 11) to a 0% signal quality and black screen due to co- channelling.

With the opening to Rockhampton co-channelling knocked out the signal from the Brisbane relays for South Sunshine Coast on 34, 35, 37 and 38 - these usually have a signal of 10 and 10.

The FreeviewPlus green button icon thing is quite interesting…I presume that’s something that can only be seen if you have a particular Digital TV device?

In any case, those are some mighty impressive catches (especially Wide Bay signals knocking out the locals from Mount Coot-tha!) TV Cynic.

Yes - I should have turned off the Freeview but didn’t think at the time. It also has the network catchup service available but of course doesn’t work on WIN.

Yes this is the result with a north facing antenna with the Mt Coot-tha nulled to no signal due to interference. 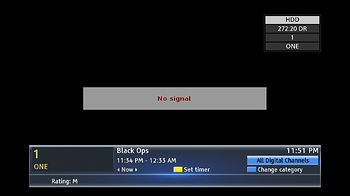 This sure is a way to confuse (the rather useless) Freeview though - the EPG now insists on providing programming for all stations previously received (whether currently available or not) - so for example there are now 3 different SC10’s in the EPG - one on LCN 5, one on 374 and another on 377 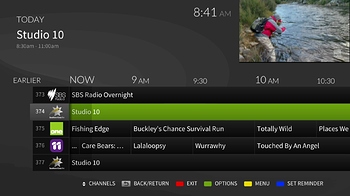 I also noticed that as per the Australian standard any additional discrete channels received on the inbuilt tuner (nothing to do with Freeview) on duplicate LCNs are stored starting at LCN 350. The system already had stored ABC regional and SBS regional stations there, but tuning in the additional stations, and especially now with the large number of duplicate LCNs (7, 70 and 71 !!) the system filled up to 400 then stopped. I don’t know if that is the capacity of the AUS standard or it is just a Panasonic limitation. If this were more permanent it would be necessary to re-allocate program numbers to the extra LCNs.

I have a Topfield STB that has a different numbering system above 99.

It stores additional versions of the same LCNs into 1001 and above.
I took this STB on a tour of regional NSW/Gold Coast, so it now has about 80 different RF channels scanned into it. eg. NBN 36 Newcastle and WIN 36 Wollongong.

Lots of tropo FM reception from the north into Bribane tonight, MUF reach high enough for some TV Dxing. Was able to add the new LCNs being broadcast from WIN Wide Bay 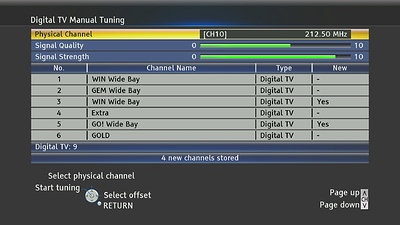 In both cases, I got good signal levels (according to my Panasonic receiver which has exactly the same display as TV Cynic posted above).
But NO quality!!!
So naturally the receiver couldn’t or wouldn’t scan them in.

I am getting the full suite of channels from Nine Melbourne (VHF 8) booming into Mount Gambier, with strong signal quality and strength.

I haven’t had this happen for a couple of years.

I can see that it is your only chance at Melbourne channels due to the Hamilton/West Vic channels occupying VHF 6, 7, 11 and 12…

Do you get the West Vic channels there permanently?

Yes, although the signal quality can occasionally be weak. But most of the time I get a watchable signal for Western Victorian channels.

Good catch. Did the signal quality of the Hamilton stations decrease with potential interference on their frequencies?

Yes, the ABC (VHF 6) and SBS (VHF 7) stations from Hamilton were so weak that they didn’t tune in, even though they are usually watchable.

While setting up the antenna to receive the Channel 7 Gold Coast broadcast I was very surprised to receive TVQ 36 from Currumbin one night. It is just a 1kw relay at 85km and is vertically polarised. The antenna I needed for 7 at Mt Tamborine is horizontal and had to be kept quite low to avoid interference from co-channel stations to the north. Currumbin isn’t there all the time, so must have been a bit of tropo. 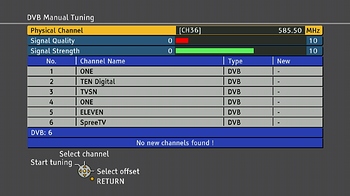 7, 9 and 10 from Mt Tamborine for comparison

My Panasonic DVD HDD recorder has the same graphics as these, and also gives me the same “no new channels found” whenever I try to do a rescan. Which is very irritating when trying to update LCN names, meaning I have to do a full wipe and rescan

Anyhow, here are some screenshots of my NSW Central Coast TV “DX”, which is 53kms from my place from Wyrrabalong with a $60 indoor digital Antsig antenna. Tx is 1,250 watts.

Sorry about the ordinary quality, and it doesn’t look to be in the order I’d hoped (RF channel order). 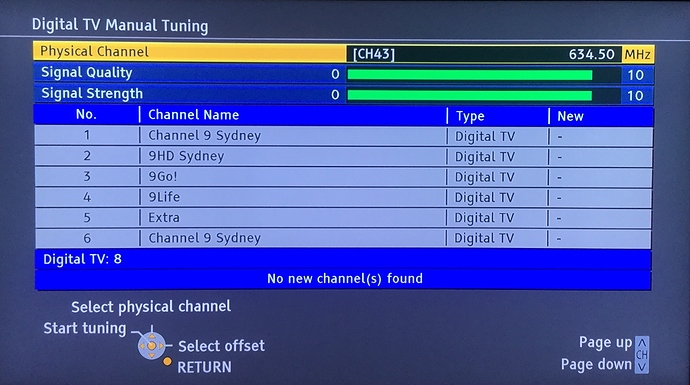 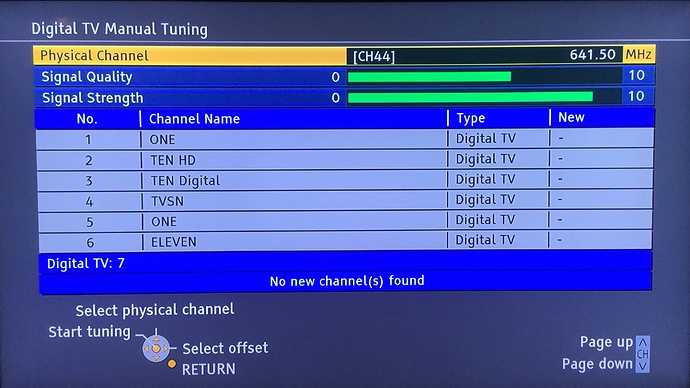 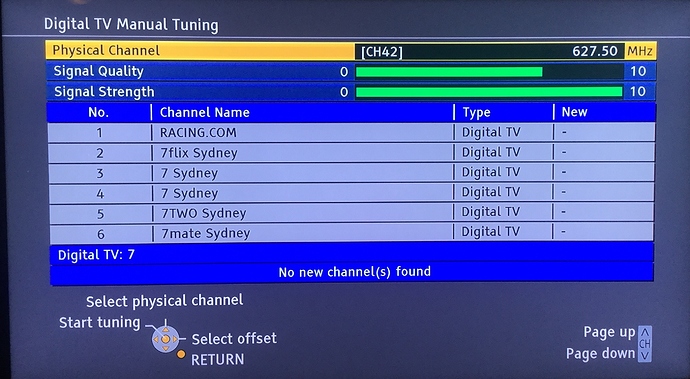 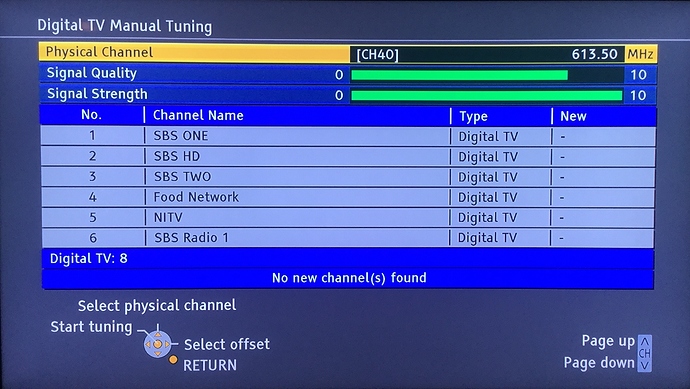 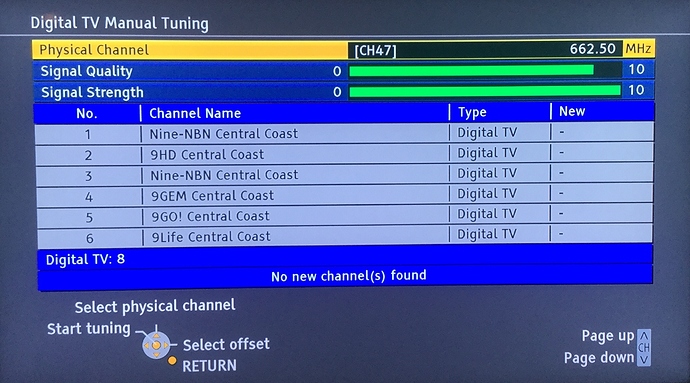 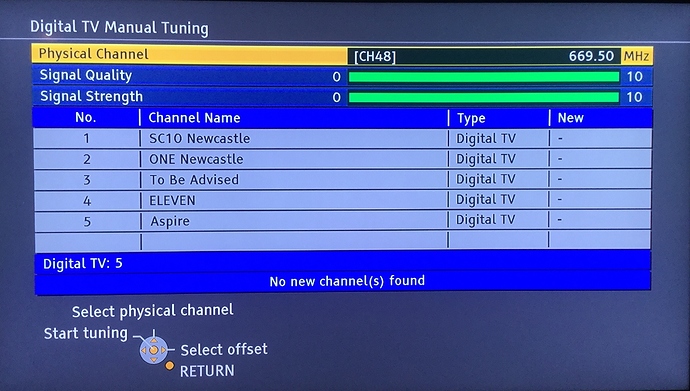 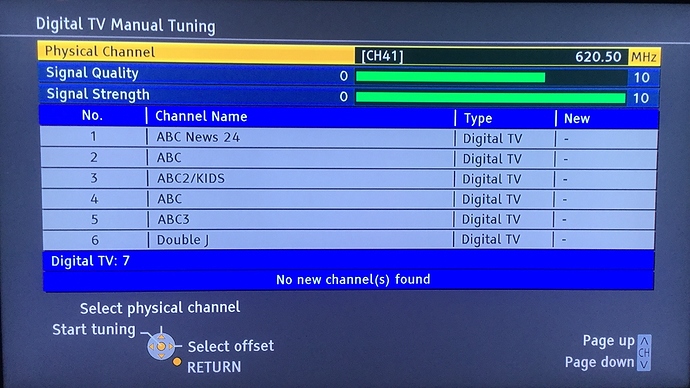 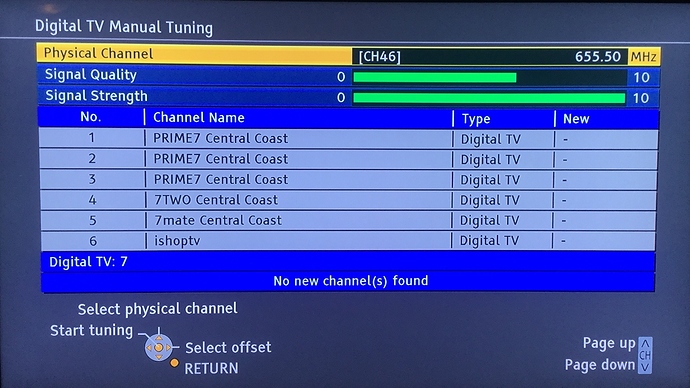 It’s easy for much of Sydney to receive regional TV (either from Knights Hill or for those in the Northern Beaches, from the Central Coast) – I was wondering how hard it is for people in Melbourne and the other metro markets to get TV from adjacent regional markets.

It’s easy for much of Sydney to receive regional TV (either from Knights Hill or for those in the Northern Beaches, from the Central Coast) – I was wondering how hard it is for people in Melbourne and the other metro markets to get TV from adjacent regional markets.

In the late 1970s we used to get very patchy (often B&W only) reception of GLV10 from the northern part of Melbourne with just an ancient rooftop antenna. Probably helped because we lived in a fairly elevated area. But when GLV changed from 10 to 8 we lost its reception altogether - it was probably drowned out by local channels 7 and 9. Once aggregation came we could get snowy reception of some UHF channels from Gippsland but we’d never watch anything on them.

I used to be able to get Channel 4 from Gippsland on my FM radio but could never pick it up on TV.

I did occasionally manage to view TVQ0 from Brisbane sometime around 1986 (after SBS had vacated the Channel 0 frequency) and also TV One from New Zealand which came through on our Channel 0 frequency remarkably well, in colour and with little static. But that was a one off…

Where I am now we don’t get any regional signals at all. Before the closure of analogue I did once or twice manage to pick up WIN television from Launceston but it was barely watchable. But now it’s all digital I’ve not been able to get anything other than the main Melbourne signals.

With the right equipment and a good line of sight to the Glasshouse Mountains, you can get the Sunshine Coast regional TV translators across the Northside of Brisbane from Redcliffe north. The Brisbane retransmissions on UHF boom into the Northside.