Game on Down Under! The ABC is thrilled to announce that broadcaster Chris Bath will return to screens around Australia as the host of nightly entertainment program Invictus Games Today , to air during the Invictus Games Sydney 2018.

The primetime show will be broadcast out of the Invictus Games precinct at Sydney Olympic Park. Invictus Games Today will be a lively half-hour that captures – and helps create – the spirit of the Games, delivering a nightly roundup of results and achievements.

The program will be broadcast on our main channel, on ABC iview and on our international television channel ABC Australia, throughout Asia and the Pacific.

Chris said: “I’m excited and proud to be part of ABC’s Invictus Games Sydney 2018 coverage as host of Invictus Games Today and teaming up with “Lehmo”, Dylan and Damien . It’s a chance for us to showcase the best of humanity and in the process be inspired. I’m looking forward to meeting the remarkable competitors, their familes and friends and sharing their stories.”

David Anderson, ABC Director of Entertainment & Specialist, said: “As the official broadcaster of the Invictus Games Sydney 2018, the ABC will bring together communities across Australia to celebrate the strength and spirit of our wounded, injured or ill service men and women.

“The ABC will broadcast 100 hours of live, original and curated ABC content – from Invictus Game Today to news reports, documentaries, children’s programs and live coverage of the events - that will inform, entertain and inspire audiences leading up to and during the eight days of competition.”

The Invictus Games Sydney 2018 will be held across Greater Sydney, including Sydney Olympic Park and on and around Sydney Harbour, from October 20 – 27.

During the Games, the ABC will have multi-platform coverage across our scheduled radio and TV programs as well as on ABC NEWS TV and radio channels and on our digital channels. The Games will be streamed live on ABC iview and on the ABC YouTube channel.

As well as bringing the action to Australians, the ABC will share the remarkable stories of the competitors through bespoke content across sport, science, health, children’s and arts programming. Highlights will include live events streamed across all platforms, including the opening and closing ceremonies, and a slate of original Invictus Games-inspired programming.

You Can’t Ask That – Invictus Games : A special series of six five-minute episodes of the ABC original format featuring former and current members of the 2018 Australian Invictus Games team.

Australian Story : The remarkable story of Special Forces Sniper Team Commander Garry Robinson and Invictus Games competitor, who survived a Blackhawk helicopter crash in Afghanistan in 2010. This special episode follows his recovery, including the crucial role played by his family.

The full programming slate will be announced closer to the Games.

The inaugural Invictus Games, created by HRH, The Duke of Sussex, was held in London in September 2014.

The Duke was inspired to establish the Invictus Games after witnessing the US Warrior Games in 2013. Seeing the positive impact of sport physically, psychologically and socially, he was determined to create an international multi-sport event.

The Invictus Games use the power of sport to inspire recovery, support rehabilitation and generate a wider understanding and respect for defence personnel who are striving to overcome physical and emotional challenges. They recognise the significant contribution made by family and friends in the recovery process and seek to motivate and inspire the competitors - and all who strive to triumph over adversity.

This year’s Invictus Games will be a huge event, especially with Prince Harry (games founder) and wife Meghan set to visit Sydney and to attend the opening ceremony.

This year’s Invictus Games will be a huge event, especially with Prince Harry (games founder) and wife Meghan set to visit Sydney and to attend the opening ceremony.

And if one of the commercial networks had the rights to this, they’d be the focus of at least 75% of their coverage.
Thank god the ABC got the rights, so viewers can actually see what happens on the track.

Right about now, I wonder if the Seven Network is looking at the press release thinking “What could have been?” at the announcement of Chris Bath co-hosting a nightly program during the Invictus Games?

If not, they really should be IMO!

Kensington Palace has just announced the itinerary for Prince Harry and Meghan’s South Pacific tour, which includes attending the opening ceremony of Invictus Games on October 20, and the closing ceremony on October 27. There were some rumours last week the trip might be called off due to Meghan apparently falling pregnant. Here are the dates. 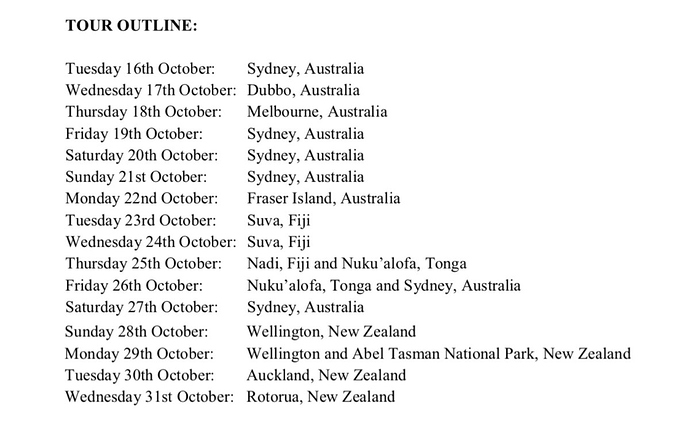 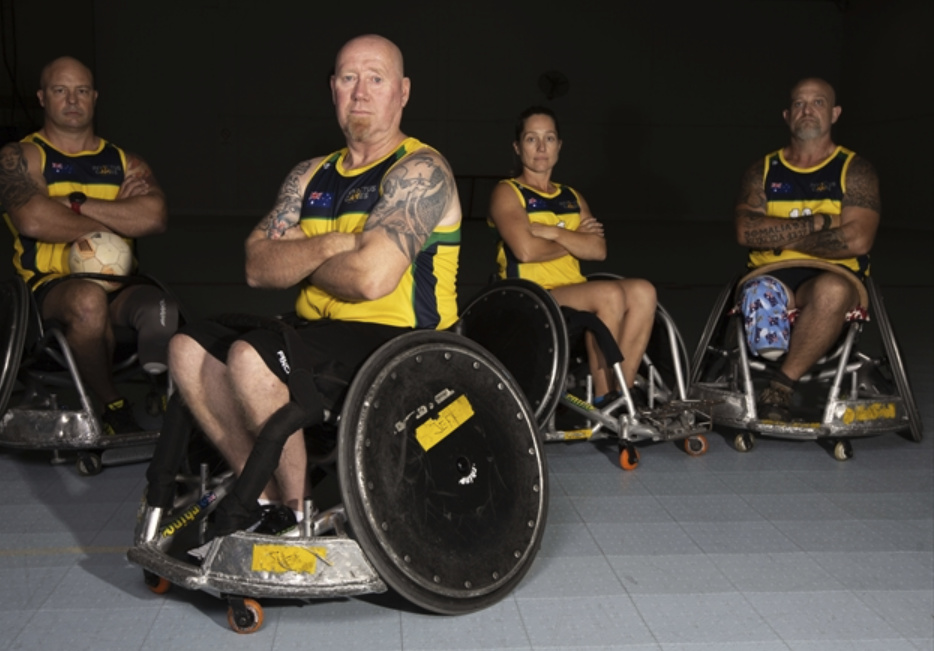 This deeply moving one hour documentary goes behind-the-scenes of the Invictus Games Sydney 2018 to follow the formation of the Australian wheelchair rugby team as they struggle to reclaim their lives on and off the court.

Fighting Spirit – The Wheeling Diggers’ Invictus Games Dream follows the formation of the Australian Defence Force wheelchair rugby team, as they strive to wear the green and gold at the Invictus Games Sydney 2018. Once again these wounded warriors will put their bodies on the line in service of their country. Only this time, the battlefield is a stadium court, their armour of choice is a combat wheelchair and their enemy are amongst some of the most inspirational soldiers in the world.

This story begins on day one of selections, 25 serving members and veterans from all over Australia gather in Sydney to stake their claim for one of 11 Australian jerseys up for grabs in the Wheeling Diggers’ wheelchair rugby team. The selection criteria are unlike any other sporting event, competitors are selected not just on performance but how the experience will benefit their ongoing recovery and rehabilitation. 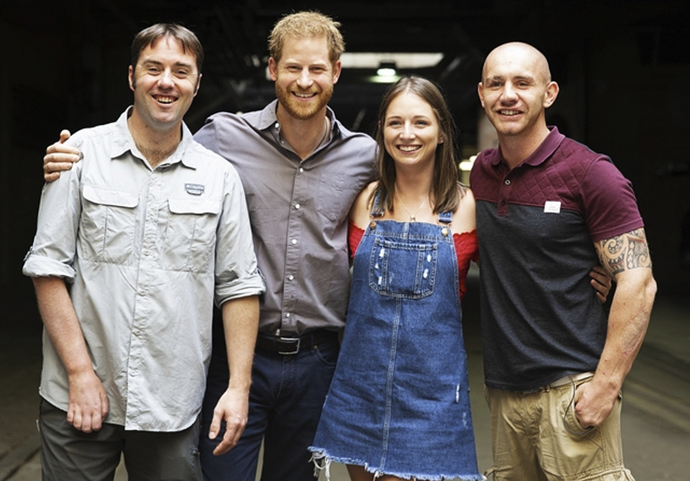 To celebrate the Invictus Games Sydney 2018, with the support of its patron HRH the Duke of Sussex, a team of Australian and British wounded veterans take on an epic 1000-km journey across Western Australia’s remote Kimberley region.

Starting in Broome, a team of Australian and British wounded veterans set off along the rugged Gibb River Road in adapted 4x4s. Bonding on the road and in bush camps and pushing themselves on a grueling trek through the remote Wunnamurra Gorge. As they pull together they begin to share intimate stories of their injuries and discuss the difficulties and issues they face having left the Services.

Broadcast live from the forecourt of the iconic Sydney Opera House, the Invictus Games Sydney 2018 Opening Ceremony will celebrate the power of the human spirit by sharing personal stories of recovery, endurance, rehabilitation and overcoming adversity from the many rich and diverse cultures that make up the Invictus family.

The ceremony will see the competitors, their families and friends welcomed, and the Games opened by its patron, HRH, The Duke of Sussex.

You Can’t Ask That: Invictus Games

From Sunday October 21 at 6:50pm and continues weeknights during the Invictus Games 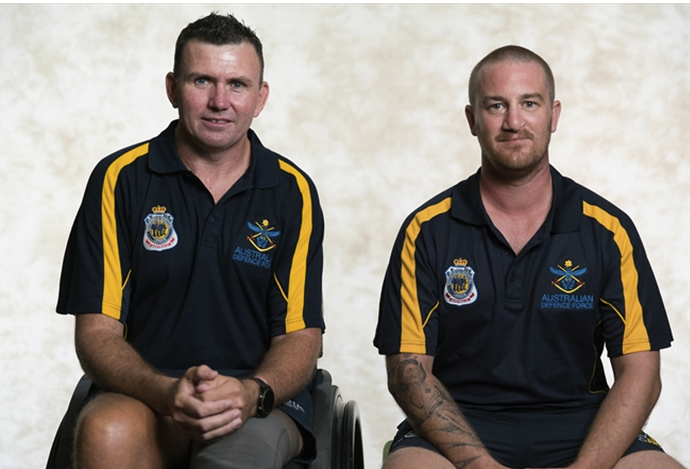 During the Invictus Games Sydney 2018, ABC and iview will screen a series of six 5-minute You Can’t Ask That - Invictus Games featuring former and current members of the Australian Invictus Games team in this unique program.

From Monday 22 October at 8pm 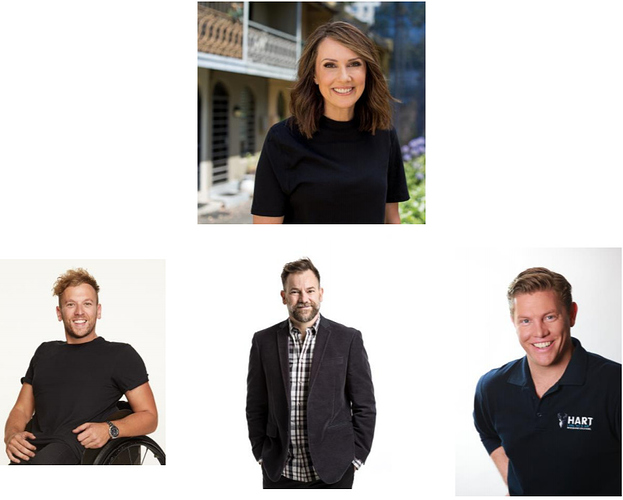 The program will be broadcast from a purpose-built studio at Sydney’s Olympic Park on ABC’s main television channel, live from Sunday, 21st October at 7.40pm, and from Monday, 22nd October at 8pm. The program will also be available on ABC iview, as well as international TV channel Australia Plus throughout Asia and the Pacific.

Invictus Games Today will feature nightly sports updates, a roundup of results and achievements, plus features on the remarkable competitors and the family members and friends who support them. 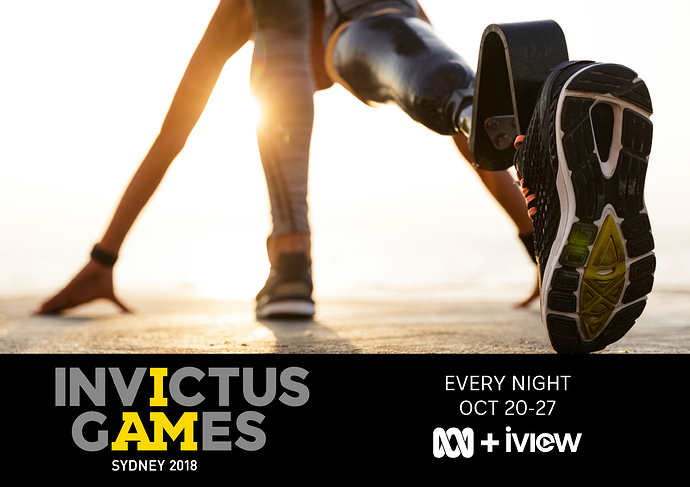 The ABC is proud to be the official broadcaster of the Invictus Games Sydney 2018, which will be held across Greater Sydney, including Sydney Olympic Park and on and around Sydney Harbour, from Saturday, 20th October – Saturday, 27th October.

The ABC will broadcast 100 hours of live, original and curated Invictus Games-inspired content including Invictus Games Today ; local and international documentaries; news, science, sport, health and children’s programs; the opening and closing ceremonies; and live coverage of the events. Leading up to and during the eight days of competition, ABC will broadcast gutsy, remarkable, touching stories about overcoming the odds that will inform, entertain and truly inspire audiences.

The ABC will have multi-platform coverage across our scheduled radio and TV programs as well as on ABC NEWS TV and radio channels and on our digital channels. The Games will be streamed live on ABC iview and on the ABC TV and iview social channels. 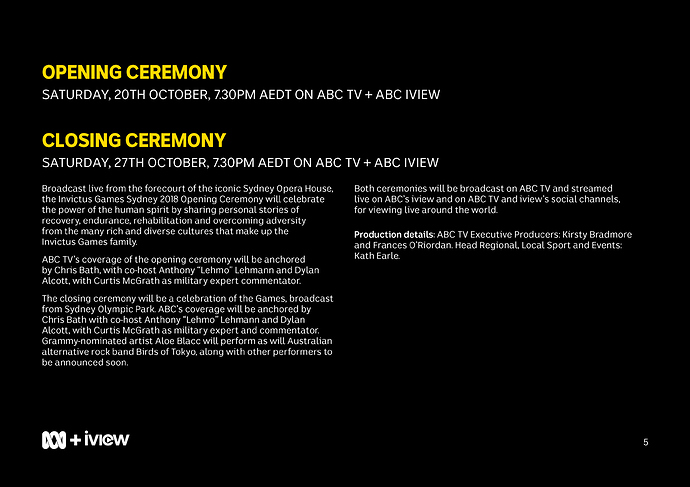 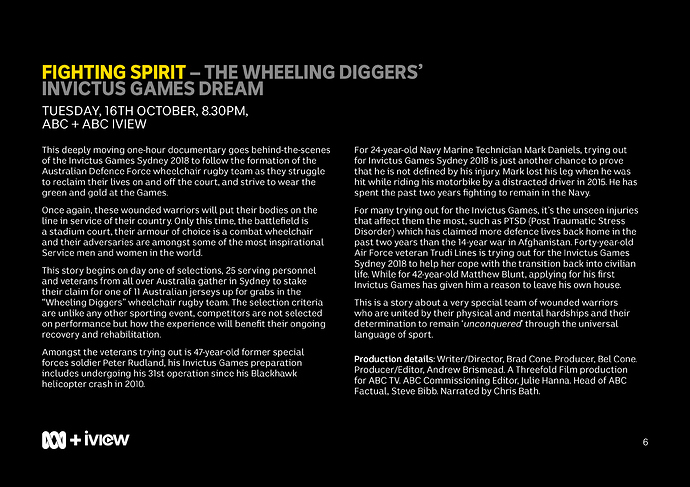 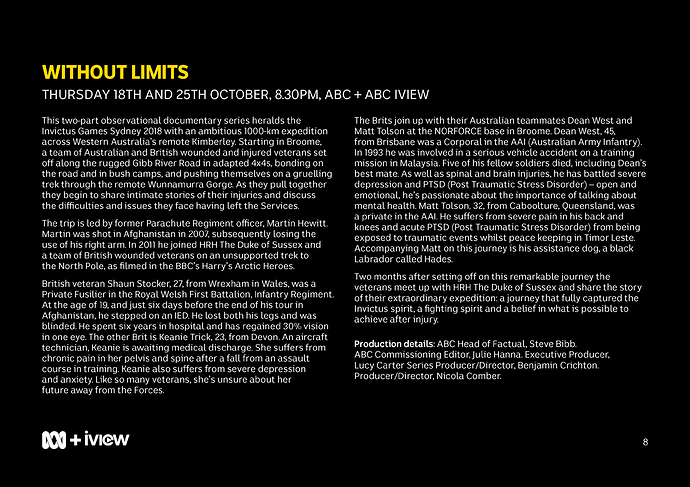 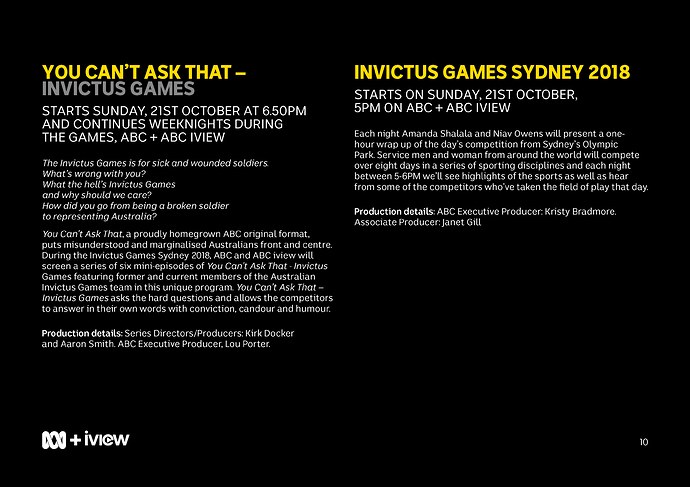 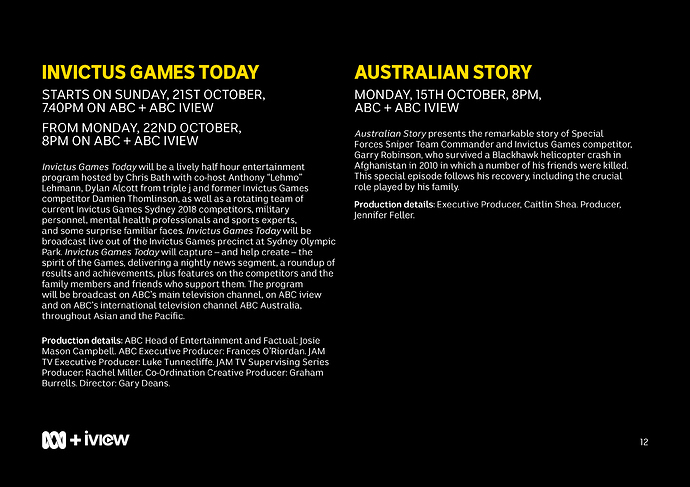 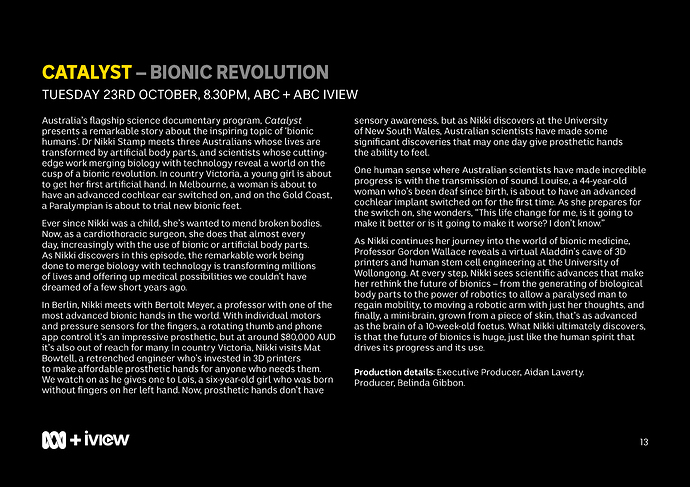 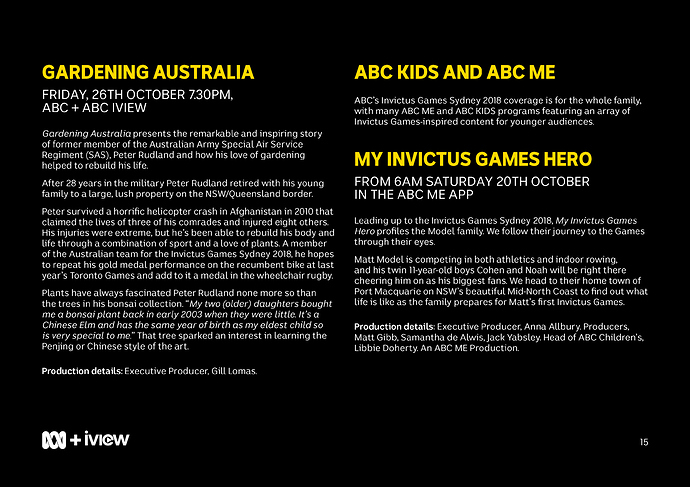 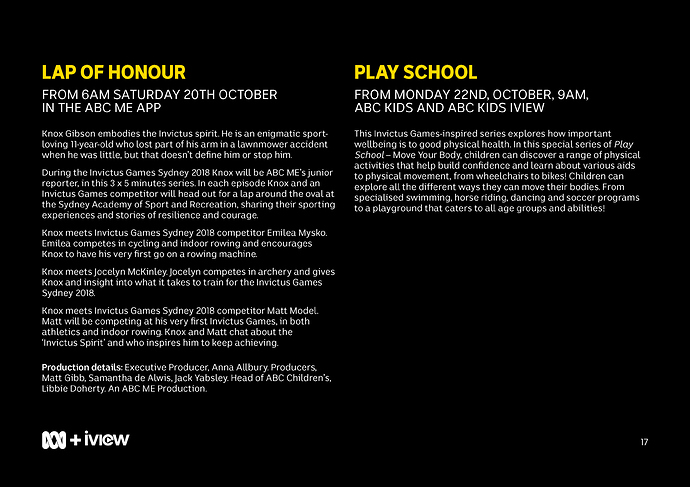 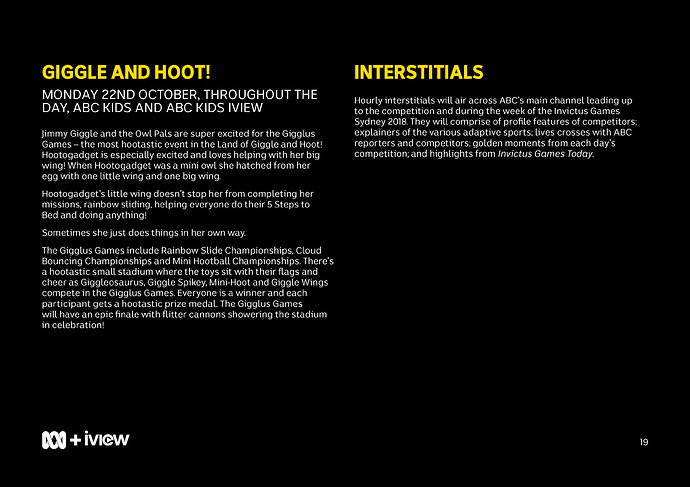 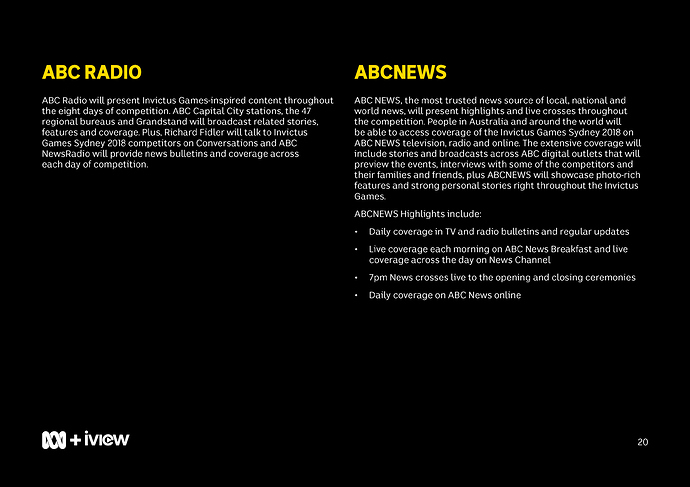 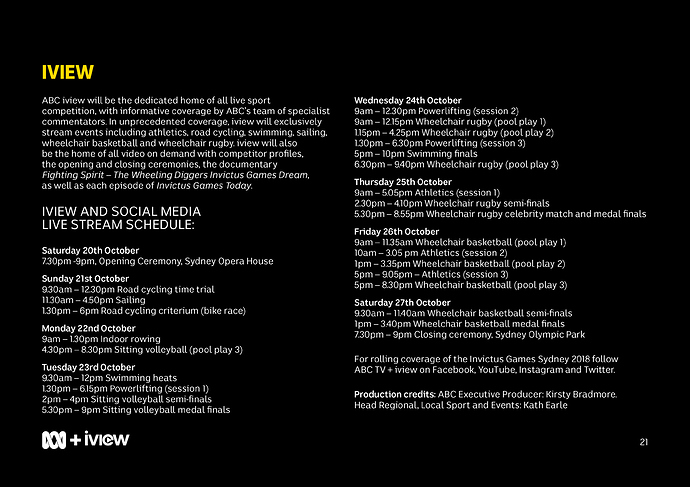 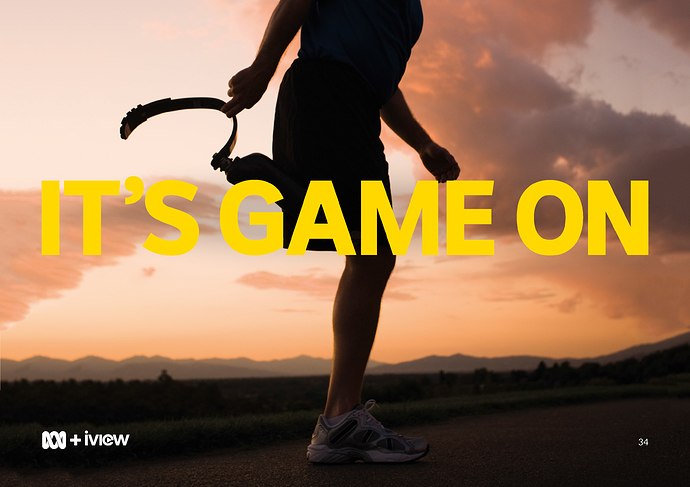 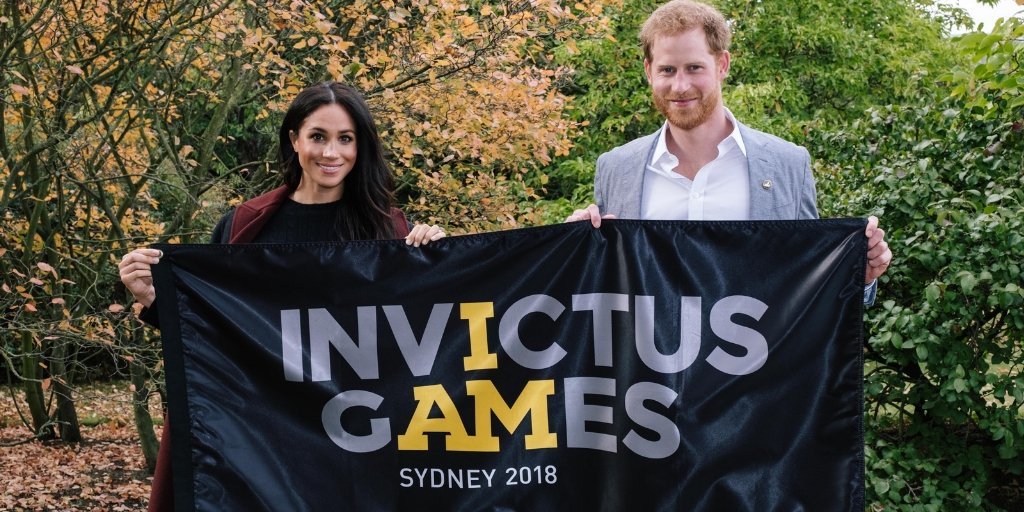 HRH The Duke of Sussex to join Invictus Games Today

ABC is thrilled to announce HRH The Duke of Sussex will join the Invictus Games Today program on Sunday night, in an exclusive conversation with Australian Invictus Games Competitors, Nicole Bradley and Stewart Sherman.

Dylan Alcott will bring audiences this exciting program from the beautiful grounds of Admiralty House in Sydney. Nicole and Stewart will share with Dylan and HRH The Duke of Sussex the stories of their personal journeys to the Invictus Games Sydney 2018 and the positive impacts on their families. They will also discuss upcoming highlights of the Invictus Games Sydney 2018.

Nicole Bradley is the Co-Captain of the Australian Invictus Games Sydney 2018 Team and will be participating in athletics and power lifting, Stewart Sherman is participating in wheelchair tennis and archery.

The resulting conversation will go to air in the very first episode of Invictus Games Today, on Sunday 21 October at 7.40 PM.

The first event is the Jaguar Land Rover Driving Challenge on Cockatoo Island from 9.30am Saturday, which Harry and Meghan will attend, and it is before the Opening Ceremony. However, I can’t find any mention of it being broadcast live and/or streamed by the ABC.

It is the only medal event to have a sponsor’s name, so the ABC won’t show it because it does not allow commercial advertising.

I don’t think the ABC are as strict on this anymore, women’s golf being a prime example in recent years carrying sponsors names and logos. Certainly not in your face. Even radio can’t avoid some sponsors’ names, especially this time of year covering motor sport and horse racing.

However, I can’t find any mention of it being broadcast live and/or streamed by the ABC.

Aren’t the ABC only doing a highlights package every night rather than full live broadcasts? 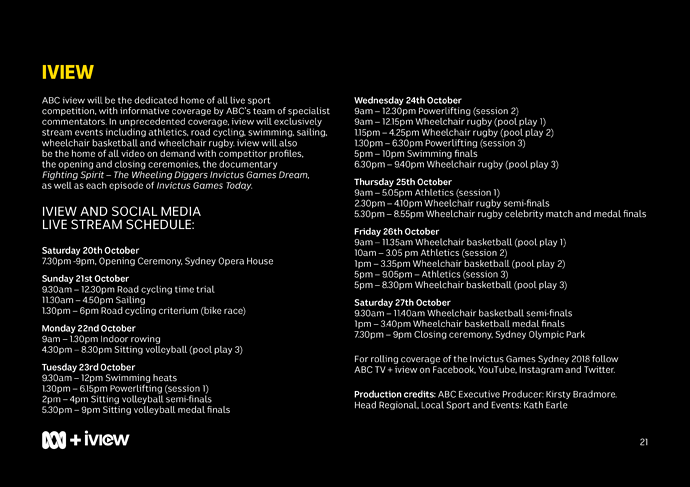 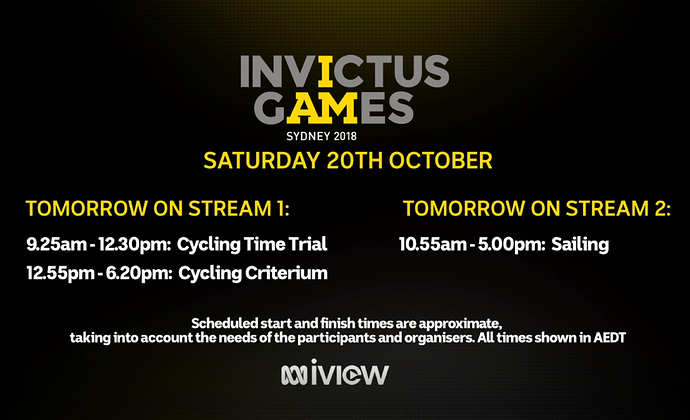