Just realised we don’t really have a home for this on the board.

Spark Sport (streaming service) has taken over the rights for cricket played in New Zealand for the next six summers.
Their first game was a men’s Twenty20 international between NZ and the West Indies tonight.
As part of the rights deal, four games will be broadcast on FTA in New Zealand through TVNZ 1.
Tonight’s game was one of those and the caps below are from that simulcast (apologies - from a webstream andare in a jumbled order, the post-game caps are first):

Those graphics are so shit. Something I’d expect on a dodgy knock off cricket game.

these graphics really suit a digital broadcast… they are different!

Those graphics are so shit. Something I’d expect on a dodgy knock off cricket game.

I don’t mind them, apart from the scorebar.
They’re also designed to be viewed on a number of different devices (rather than just broadcast TV), given Spark is a streaming platform, so having some of the info in big type and blocky is part of that.

I don’t mind them, apart from the scorebar.

Apart from the pink colours, I actually quite like the score bar. Clear and easy to quickly ascertain the needed information. Certainly better than FOX Sports.

I’d minimise the information. A lot of it doesn’t need to be onscreen at once.

Got some 2020 7flix vibes happening with those last few caps!

I quite like those graphics - they are simple and easy to read. Beats Fox Cricket’s & Seven’s hands down

Are we sure this is the same graphics as Spark? I get that it is a ‘simulcast’ and a Spark Sport production, but look at the font on the banner and scorecard. I swear they match (one’s bold and one’s not), don’t they? I guess we’ll have to wait and see whether it is the same ones they’ll be using for the Spark exclusive. I hope they have different graphics by the time Australia turns up!

Are we sure this is the same graphics as Spark?

Well, given I watched the Spark broadcast on my TV while taking the caps from TVNZ’s stream on my laptop, yes I’m pretty fucking sure.

I get that it is a ‘simulcast’ and a Spark Sport production, but look at the font on the banner and scorecard

The ‘1 News’ banner is an overlay from TVNZ’s control room. They had no role in the cricket production.

hope they have different graphics by the time Australia turns up!

I know they probably won’t, sadly. They are so shit.

Each to their own.

I can guarantee it is not a TVNZ presentation though. I’ll try get some more Spark caps over the coming games.

Was there any reason they used pink for Black Cap colours when they gave the WI their prominent maroon and gold?

Yes that one is a little odd. 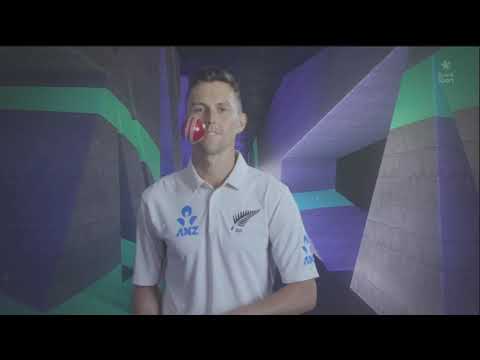 You don’t mess with the mod

I’m invoicing you for the injury I just did while laughing.

The first 20 minutes of the coverage (featuring that opener) only aired on Spark Sport. By contrast, TVNZ’s simulcast began at the same time the world feed seemingly began (6:50pm NZT). That’s interesting because when Sky previously had the rights, the world feed seemed to encompass their entire coverage from start to finish. Seems like Spark has decided to revert to the usual procedure for the world feed (ie; only beginning just before the day’s play) which is a shame because I prefer watching the ‘full’ coverage.

Speaking of the Spark/TVNZ simulcast, found it interesting last night that there wasn’t any mention of/overtures to TVNZ viewers. While I understand it’s a Spark Sports production, was surprised that the commentators didn’t do something along the lines of saying “To viewers watching tonight’s game on TVNZ, the remaining 2 games of this international T20 series between the West Indies & New Zealand will exclusively air on Spark Sport. To find out more about subscribing, go to the Spark Sport website.” in order to push Spark Sport subscriptions. Also thought it might have be a jointly-branded broadcast considering that’s what happened when they aired the Rugby World Cup last year

That’s interesting because when Sky previously had the rights, the world feed seemed to encompass their entire coverage from start to finish

Sky were for a while starting their world feed coverage two minutes before the game, but I’m guessing they opened it up a bit longer through demand.

Speaking of the Spark/TVNZ simulcast, found it interesting last night that there wasn’t any mention of/overtures to TVNZ viewers.

Also was surprised by this.

Weirdly, the panel had jointly branded mics before the world feed/TVNZ feed started. But the ones at the end seemed to just be SS.

TVNZ was much more heavily involved in Spark’s RWC coverage with studio usage, host sharing/loaning and other expertise. But there is none of that this time.