Jenny Brockie has chosen a 2018 replay as her swansong after nearly two decades hosting SBS forum. 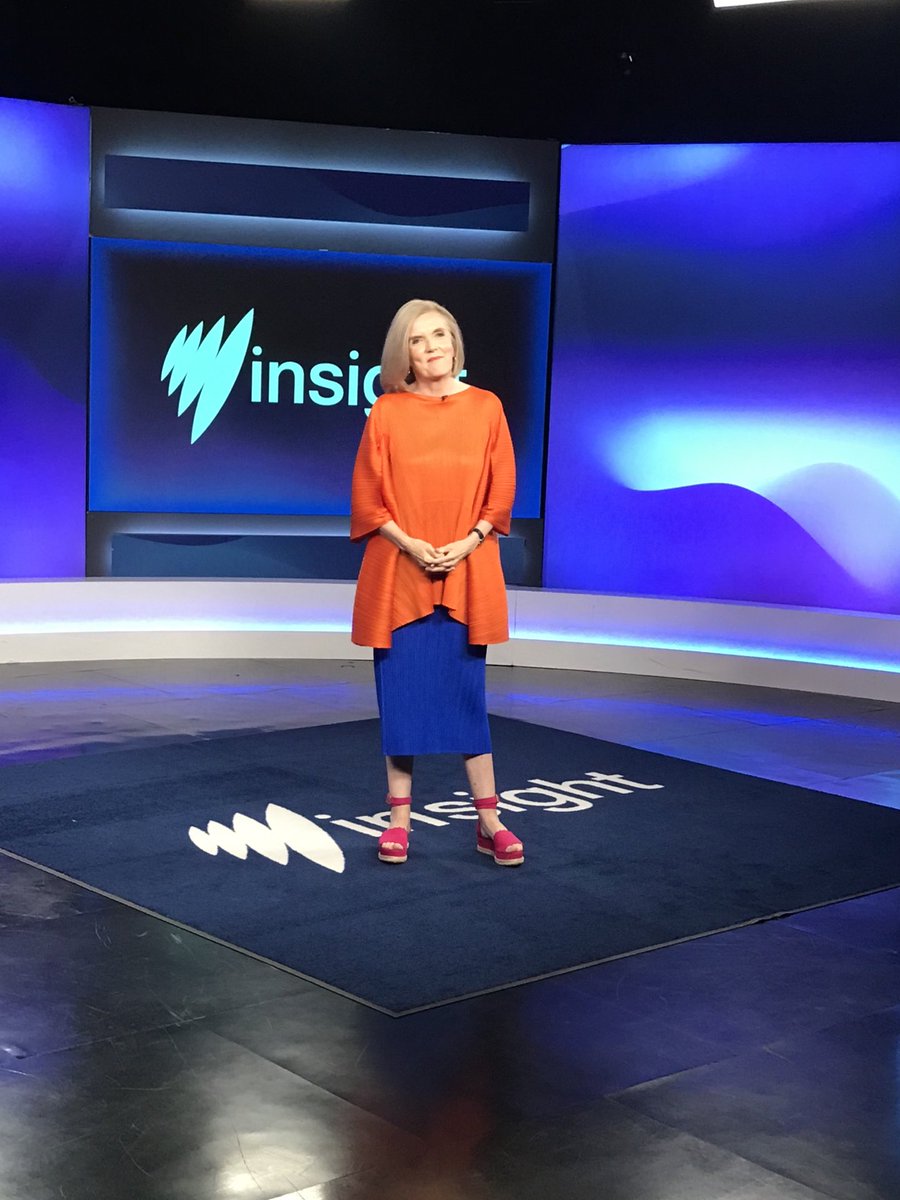 There is a special episode of Insight tonight (Thursday) at 8.30pm to coincide with NAIDOC Week. It’s simulcast on SBS and NITV.

John-Paul Janke takes a look at the importance of mentors, and the impact they have on people’s lives and communities.

Kumi Taguchi has been appointed host of Insight from next year.

Kumi Taguchi joins Insight having worked across radio, television, current affairs, long-form documentary and most recently, as the host of ABC Compass and as a presenter and reporter for the ABC News Channel. 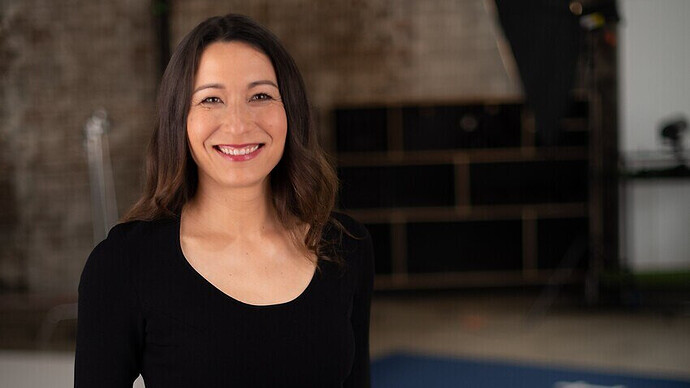 Kumi Taguchi is today announced as the new host of SBS’s flagship current affairs program, Insight. She joins the program following Jenny Brockie’s decision to step down as host after nearly two decades in the role.

Insight, part of SBS’s award winning Tuesday night current affairs line-up, isAustralia’s leading forum for powerful first-person stories shared by people from all walks of life, often for the first time, in a way that everyone can relate to. Kumi joins with more than 20 years’ experience in the media industry in Australia and Hong Kong. She has worked across radio, television, current affairs, long-form documentary and most recently, as the host of ABC Compass and as a presenter and reporter for the ABC News Channel.

Kumi Taguchi said : “I am beyond excited to be joining SBS for my next adventure. To be entrusted with a high-profile program such as Insight , with such a strong legacy of authentic storytelling, is an absolute honour. Opportunities like this come around once in a career, if you’re lucky.

“No matter how much our lives change, how much technology advances, how much we shift direction, one thing always stays the same: the power of our stories. True compassion and understanding comes from hearing about the experiences of others and seeing how they navigate through life.

“One of the strongest memories of my late father is sitting with him at his small kitchen table in Melbourne, watching the Japanese news on SBS. He would switch it on at the same time every day and I’m sure it made him feel connected to his homeland. We would sip tea and eat rice crackers and I would be reminded, too, of my heritage.”

SBS Director of News and Current Affairs, Mandi Wicks, said: “We are thrilled to announce Kumi as the new host of Insight . She comes to us with a wealth of experience and a true understanding of the value of storytelling. SBS news and current affairs is committed to seeking out the communities and voices often overlooked by others and Kumi has a deep appreciation and personal connection to this ambition.

“ Insight embraces the individual experiences of Australians and through their stories we gain a greater understanding of each other and the complex issues that affect us all. We look forward to working with Kumi to delve into many more extraordinary stories and issues next year.”

Insight will return with new episodes on Tuesday nights in 2021, along with international current affairs program, Dateline , showcasing stories and characters from around the world, and the unique mix of news, investigations, interviews and satire served up on The Feed .

If you asked Kumi what job she does, she would say “storyteller”. Curiosity about the world and all who inhabit it drive her in her work and her life. She has told stories of war veterans, marathon runners and prisoners. Charity workers, firefighters and atomic bomb survivors. Writers, singers and musicians.

Kumi’s work spans across TV, radio, 24-hour news, current affairs and long-form documentaries. Kumi was the host of the ABC’s Compass , and a regular host of major live events, including the Australian of the Year Awards . In 2018, Kumi was the MC at the opening and closing ceremonies of The Invictus Games in Sydney, broadcasting to a global audience of 60 million.

Kumi has been working in the media for over 20 years, after initially training as a classical violinist. In her first job, she picked up dry-cleaning, organised couriers and transcribed the answering machine. Since then, Kumi has held a number of roles at the ABC and SBS in Australia; and Star TV and Asia Television in Hong Kong.

Kumi is always up for an adventure, especially one that pushes her physical and mental limits. She reported live from the Sydney to Hobart yacht race, taking five days to sail the 630 nautical miles on a 70-foot yacht. A keen sportswoman, Kumi has run two half marathons, and a marathon: the latter on sand dunes in the desert, with Uluru as the backdrop.

Jenny Brockie has congratulated Kumi on her appointment as the next host of Insight.

@kumitaguchi @insightSBS You’re the perfect fit Kumi, couldn’t be happier for you! Warmest congratulations.
1 Like
TV.Cynic December 21, 2020, 4:39am #54

Officially signing off from @ABCTV. Thank you so much for everything 🙏🏼 https://t.co/C0d8xT1JrD 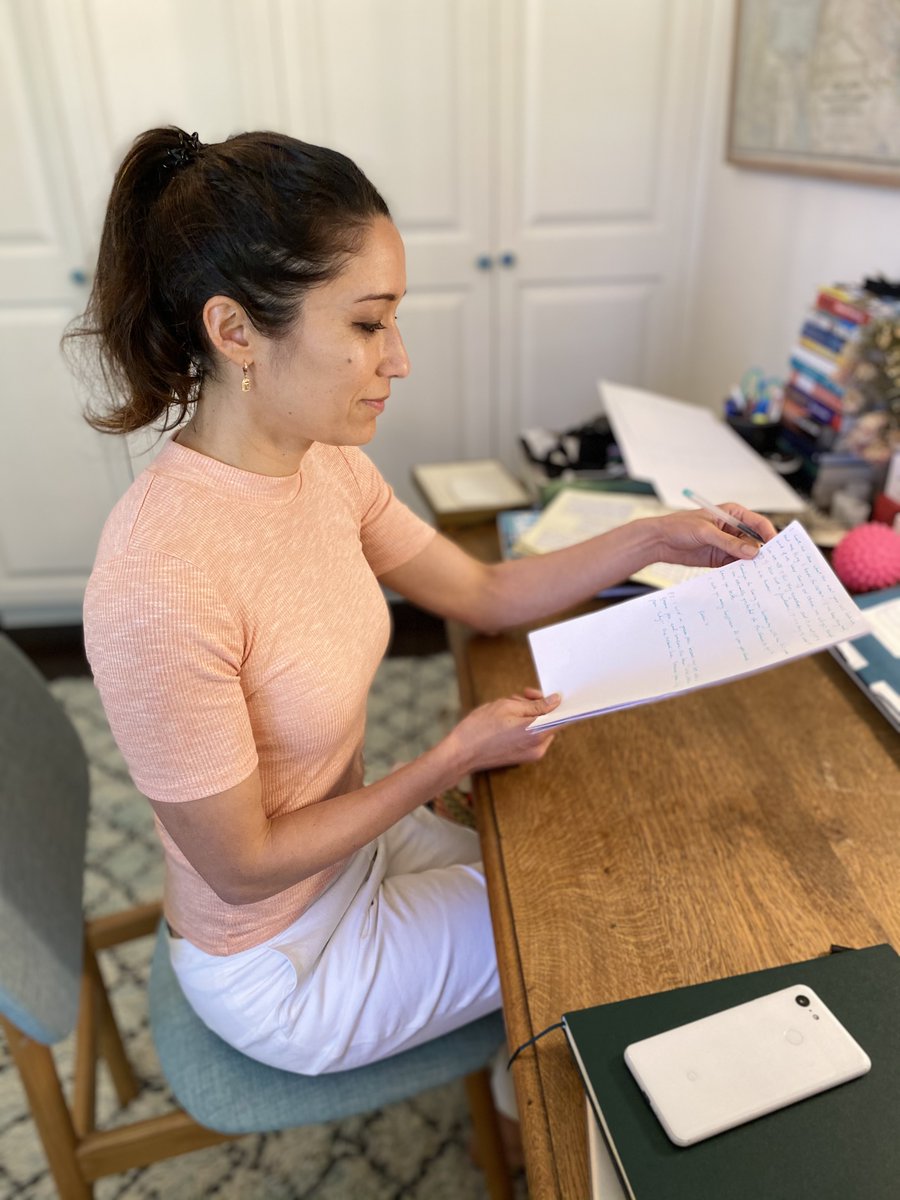 Returning for 2021 season in March 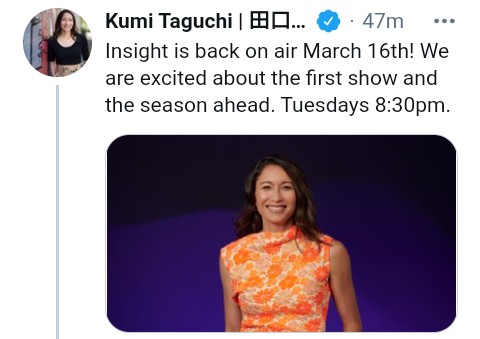 Insight is back on air March 16th! We are excited about the first show and the season ahead. Tuesdays 8:30pm. https://t.co/biRTiz49vU 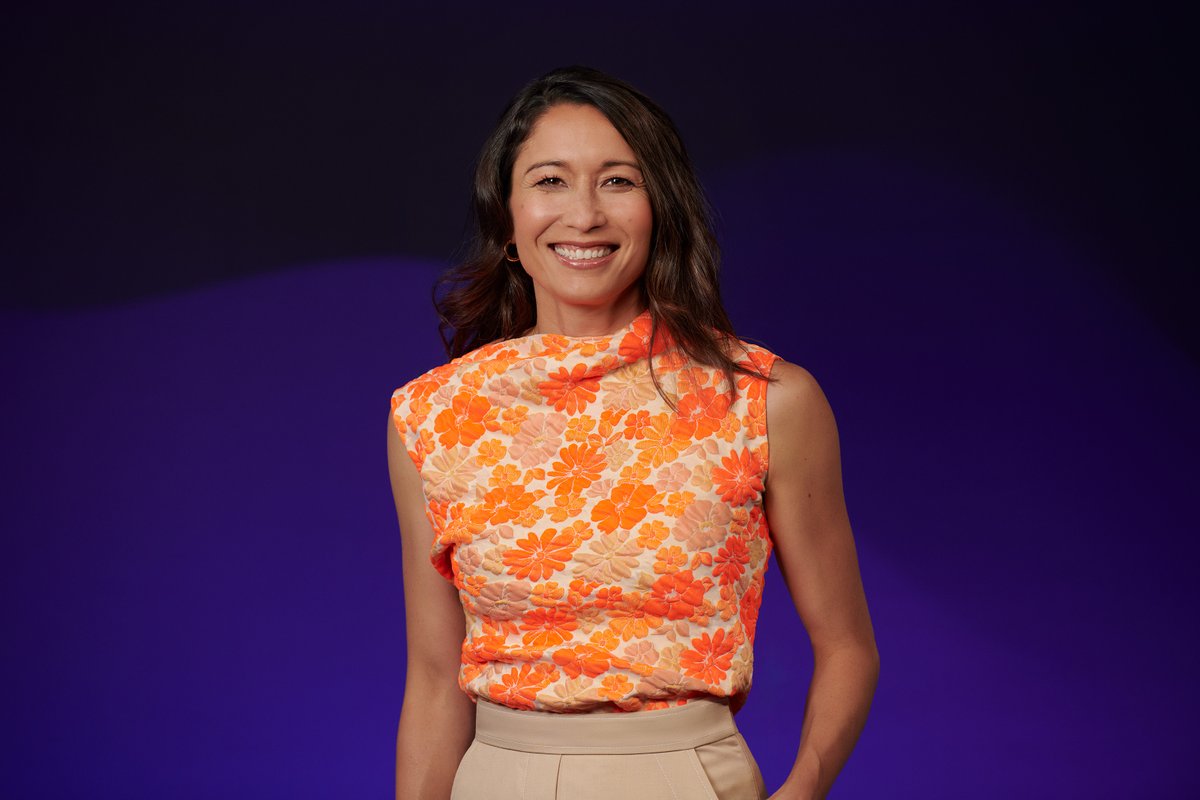 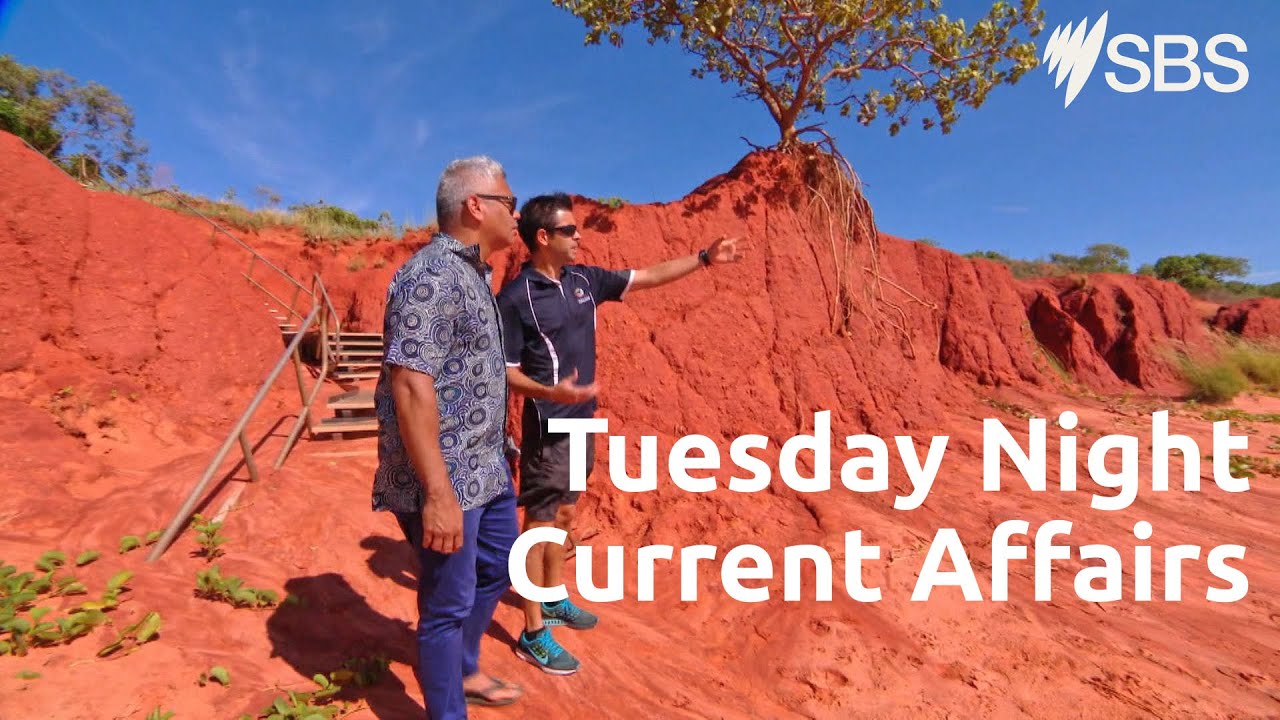 In 2021, Insight will continue to be Australia’s leading forum for powerful first-person stories and debate. As announced, journalist Kumi Taguchi will host the program and explore a wide range of topics this season including adult ADHD, favourite children and class actions among many others.

In Kumi Taguchi’s first episode as host, Insight asks the question - what’s it like to get to your fifties and find out you’ve got ADHD? A range of adults from their twenties to fifties share with Insight what it was like to get that diagnosis, how things about their past fell into place and how they used the diagnosis to change their lives for the better. They are joined by family who share the impact on them. 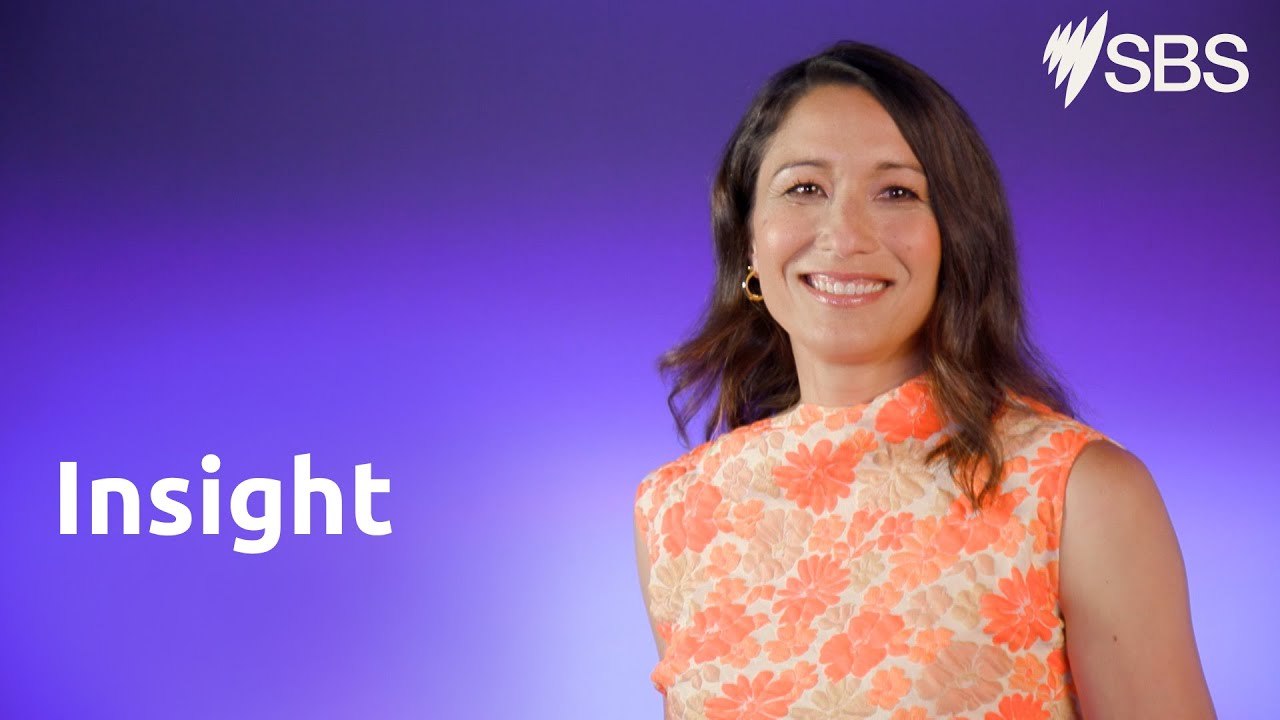 Kumi’s first show as Insight host is also the last one for producer Raveen Hunjan, who is now working at the ABC.

Please take some time to tune into my last show for @insightSBS next Tuesday. You'll hear from a truly brilliant group of people sharing what it's like to live with #ADHD. Put together with the ever-talented @TheHJohnstone #InsightSBS twitter.com/kumitaguchi/st…

Thank you @smh for the review 🙏🏼 @insightSBS is back on 16th March. https://t.co/fg0LZeQlHG

EDIT 17/3: According to Mediaweek, Kumi has already filmed five episodes of the season including last night’s season premiere.

@kumitaguchi
Our final @insightSBS for 2021 has gone to air. 32 episodes, 300-plus guests. Thank you for your support. I'm so grateful to my incredible team & to the people who choose to share their stories with us. You can catch up @SBSOnDemand. See you in 2022! sbs.com.au/ondemand/progr…
2 Likes
JohnsonTV November 7, 2021, 9:29pm #60

There is one more new episode of Insight airing tomorrow (November 9), simulcast on NITV.

Hosted by Karla Grant, NITV Special: Indigenous Incarceration aims to provide a clearer understanding around the complex issues surrounding the incarceration of Indigenous Australians by bringing together those who have spent time in prison and families whose loved ones have died in custody. They will be joined by a group of people who are working to reduce the high rates of First Nations in the criminal justice system and will discuss key solutions to address this serious issue. 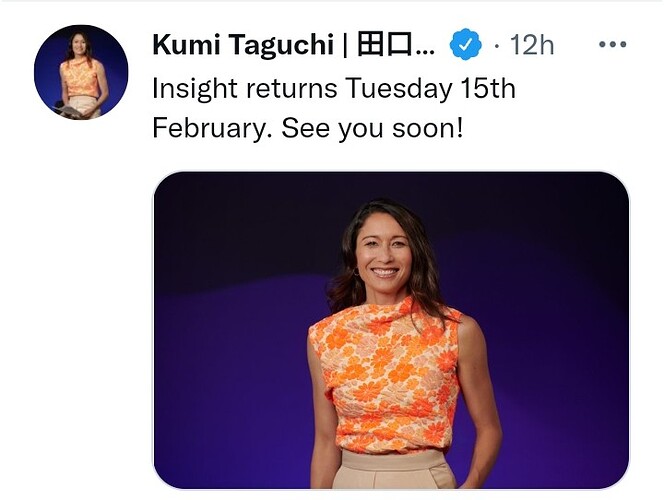 There is an interview with Kumi in The Age Green Guide today.