US$20 million in debt

iHeartRadio has been sending out promos for the then Fairfax now Macquarie stations for a few years. Nothing has really changed from my observations.

I was listening to the NZ 80s channel driving to Sydney on the weekend and around Mittagong I was surprised to hear an ad for the Wollongong Telstra Shop in amongst the couple of NZ commercials. So it appears to me that iHeartRadio are sending out targeted advertising.

Have done for a while. I listen to Coast from NZ and during ad breaks I get local ads to wherever I am.

iHeartRadio and Foxtel will present Julia Michaels for the first [V] Island Party of 2019.

iHeartRadio Australia have launched the iHeartRadio app on Telstra TV devices across Australia. ARN today announced the extension of its iHeartRadio licence in Australia until 2036.

Have you Heard about a New Station playing Mostly Rock Music called The Tap List? In what has to be the best example of wasted bandwidth I present you Testing 1,2,3 on iHeartRadio with a song to ad ratio of 1:1. 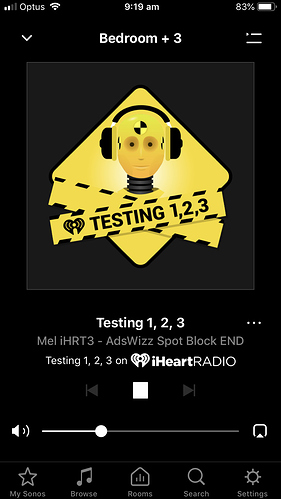 TIL iHeartRadio’s 80s and 90s stations appear to be localisations of iHeart80s and iHeart90s, playing from SCA’s music library rather than their own.

Are there any differences in playlists between the iHeart versions and the the Pure Gold/KIIS versions?

Nope - the only difference is local branding and spot breaks. Originally these were played out locally at each station, though this is no longer the case as I’ve been led to believe.

playing from SCA’s music library rather than their own.

I’d like to know how you draw this conclusion.

There’s no link between ARN’s 80s and 90s stations with the iHeartMedia streams - the clear Australian flavour to the playlists alone is a dead giveaway, let alone the PAMS style jingles used on the American streams.

I actually prefer the US iHeart 80s rather than the Australian version.

Pulse FM in Hobart has become the first narrowcaster in Australia to stream on iHeart Radio:

Listen to the latest episodes from top podcasts. Get news, sports & lifestyle info from your favorite personalities for free!

Another round of major layoffs at iHeartRadio in the States.

It sucks, but it isn’t surprising that the position of radio DJ will barely exist within a few years. iHR can just automate all the playlists and compete against Spotify or Apple Music.