Newcorp has revealed some details of a new miniseries from Seven based on the life of Paul Hogan.

The events to be covered by the series remain secret, but it was revealed that filming has commenced in Brisbane.

When funding was announced last year the working title for the FremantleMedia production was The Paul Hogan Project.

Also reported last year was that Nine was planning a rival Hoges telemovie, but no word on that.

According to Fairfax, the series believed to be titled Hoges.

Somehow, I’m going to guess that this Paul Hogan mini-series will be Seven’s big ratings season launch program of 2017!

Top cast listed there. So many well known faces. 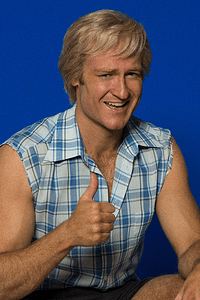 Brisbane born NIDA graduate and LA resident Lawson has returned to Australia to play Paul Hogan - the original working class everyman who became an Oscar-nominated superstar known globally as Hoges. Lawson will be donning the famous workboots, stubbies and flannie of the Aussie legend Hogan, a much-loved and larger-than-life character.

This mini-series is the story of a rare comedic talent who, while working as a labourer on the Harbour Bridge, broke into Australian television and eventually the world stage. Through the relationships and factors that helped shape Hoges’ remarkable success, it looks at the life of the man who says he just played himself and in so doing captured the heart of Australia and the world.

Joining Lawson are Justine Clarke (Tangle, Time Of Our Lives) as Noelene Hogan – Hogan’s partner in crime, his equal in wit and sparkle, one of just a handful of true peers in his life; and Ryan Corr (Banished, Packed To The Rafters) as John Cornell aka ‘Strop’ – the brains to Hoges’ funny bone, his wingman, his best friend.

Josh Lawson said: “Paul Hogan has always been one of my heroes, so this role is as exciting as it is challenging. He’s such an iconic figure. Everyone loves Hoges and one of his great gifts was making audiences feel like we really knew him. But there’s so much of his life that many people don’t know about and I’m thrilled that I get to be a part of telling his incredible story. And to be able to make this back in my hometown of Brisbane just makes it all the more special for me.”

Justine Clarke said: “We all know parts of the Paul Hogan story, but there are many parts that I think will be a revelation for our audience. I’m pleased we’ll get to see his family life and how important that was to him and how much love and support was surrounding him. Often when we think of successful people it’s as a lone person but there are so many people who help lift them; that’s the story that I’m interested in.”

Ryan Corr said: “It is really exciting to be shooting with these incredible actors and creatives recreating a period of Australia’s history. It’s a story of two guys who take on the world head-on and always have their friendship at the centre of it. It’s a really exciting group of people who have come together to tell this iconic Australian story.”

Production on the Paul Hogan mini-series is now underway in South East Queensland. FMA’s Jo Porter and Seven’s Julie McGauran are Executive Producers, Kevin Carlin (Molly, Wentworth) is Director, Brett Popplewell is Producer and the script is by Keith Thompson (The Sapphires) and Marieke Hardy (Packed To The Rafters, The Family Law).

Screen Australia and Screen Queensland have both confirmed significant support for the project.

Some of the filming of this is being done at BTQ Studios. If you drive past there at Mt Coot-Tha at the moment you will see a number of trucks.

Some filming was done one day last week at the TVQ studios too.

5 second promo shown during half time of the AFL Grand Final telecast. It confirms the mini series will be called Hoges and is “coming soon”.

5 second promo shown during half time of the AFL Grand Final telecast. It confirms the mini series will be called Hoges and is “coming soon”.

It gives us some hope that there will be some decent programming in the last part of the year. The promo actually says “Coming to Seven” so isn’t necessarily coming soon.

Wouldn’t expect to see this in 2016,7 did the same with molly last year.

Sneak peek has been on Seven last night and tonight, including the re-enactment of the famous scene from Crocodile Dundee (“this is a knife”).

Unlikely given cigarette advertising has been banned from TV since 1976

Some comments by Paul Hogan backstage at the AACTA Awards tonight on the upcoming mini series about him, after accepting the Longford Lyell Award:

It’s very funny to see someone else playing you, but he’s (Josh Lawson) a good looking kid so that’s OK. It could’ve been a real dork they put up there.
I’d have preferred they waited until I was dead.

Updated promo shown today during the tennis, with caption “after the tennis” added.

This thread title could be changed now to “Hoges” since that’s what the mini-series is called. 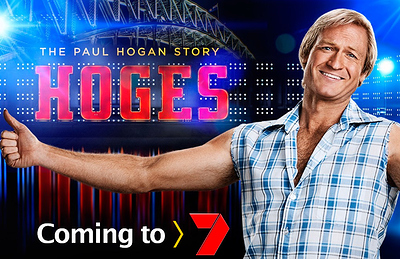 From Seven and FremantleMedia Australia (FMA) comes HOGES: The Paul Hogan story. An almost accidental supernova of raw comedic talent exploding onto the entertainment scene; first Australia, then the world. The story of how a married-at-18 Sydney Harbour Bridge rigger with five kids entered a TV talent contest on a dare from his work-mates to become a household name and an Oscar-nominated superstar.

Embraced by all Australians and soon known simply as “Hoges,” he is joined on his meteoric journey by lifelong friend, producer and sidekick John “Strop” Cornell.

Together, they first make Australians laugh, then proud with one of the most successful tourism campaigns in history selling Aussie hospitality to the world.

This, with the runaway success of Crocodile Dundee, the highest US-grossing foreign film ever in its day, cements Hogan’s legacy.

HOGES explores the factors which shaped this success – and at what cost success might have come.
It entwines the story of his amazing journey with that of his close family life, of his two great loves, the pain of divorce, his struggle with the intense scrutiny of life in the public eye, but also of his enduring friendship with Cornell and the rollercoaster ride of their careers.

FMA’s Jo Porter and Seven’s Julie McGauran are Executive Producers, Kevin Carlin (Molly, Wentworth) is Co-Producer and Director, Brett Popplewell is Producer and the script is by Keith Thompson (The Sapphires) and Marieke Hardy (Packed To The Rafters, The Family Law).

Poolside at Granville baths, a young Paul Hogan cracks jokes and pashes Noelene, his childhood sweetheart. Ten years, fi children and multiple jobs later, he’s working as a rigger on the Sydney Harbour Bridge. Dared by his work-mates to stick it to the judges on a popular talent show, the irrepressible Hogan is launched on a stellar trajectory of record ratings, multiple Logies and the creation of the icon we all know as “Hoges”. But such success can’t come without some changes at home, and when Hoges starts planning his next creation - Crocodile Dundee – there’s a sense that the road ahead might not be so smooth…

While the success of Crocodile Dundee catapults Hoges onto the world stage, things are not so easy at home. After 30 years of marriage to the fi great love of his life, he is falling for his glamorous co-star, Linda Kozlowski. Painful divorce, new life and new love in Hollywood follow, new fi and new characters, but, in spite of intense press scrutiny in Australia, his homeland will always be calling. With the Olympics approaching and his old mate Strop arriving in LA with tickets to Sydney, will Hoges return to take his rightful place as a much-loved Aussie icon?

I always called it Granville pool or swimming pool.

I hope this telemovie will be really good, but with the promos and Josh Lawson I have concerns.

It won’t be anywhere near as good as “Molly”.

Because it’s not set in Melbs?

I hope this series would touch on the tax evasion stuff but sadly not.