If she doesn’t want to risk breakfast again, I’d be happy with Carrie, Tommy and Sophie for drive. A very powerful trio to take on Kate, Tim and Marty.

You can’t just throw someone into a team and think it’s going to work. That’s the mistake 2Day made the last couple of times. Carrie and Tommy work just fine. They don’t need a third wheel.

"We are very much aware that it is going to be a long term gain for awareness and we know that the show is going better and better,” she says.

“There’s not a hell of a lot of faith in the 2day brand because we’ve been through four breakfast shows in four years, so we are aware of that and we certainly aren’t going to be making any changes and we have the marketing plan rolled out through until next year so it’s just about trial and trial comes from awareness.”

Breakfast radio competition to heat up as stations tweak next year's lineups -...

The breakfast time slot is unarguably the most important show for a radio station. It sets the tone, and kick-starts the audience for the rest of the day.

Using an original song, Osher surprised his Stav, Abby and Matt with Osher co-hosts with the news during the show this morning, explaining that the addition of hosting a Bachelor spin-off to his already loaded schedule had proven too much.

So now we know he’s hosting “Bachelor In Paradise” too then.

So now we know he’s hosting “Bachelor In Paradise” too then.

The series will be hosted by Osher Günsberg from The Bachelor Australia and The Bachelorette Australia, who will help the cast navigate surprises, shocks, unexpected guests and some unlikely friendships.

What role did Jamie Dunn play on the show? From the News story: 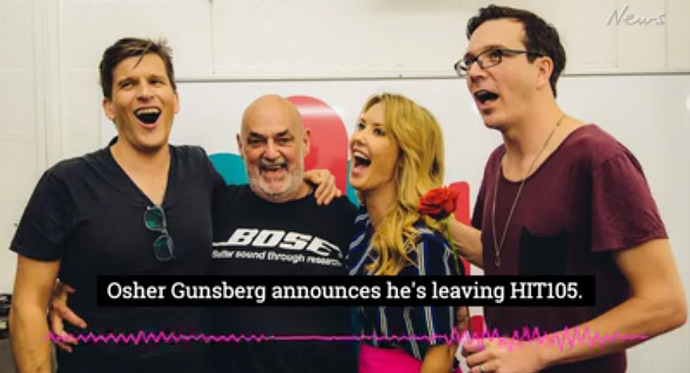 Probably the only photo they could find of Osher actually in the same room as some of the other cohosts.

Fev is away on sick leave this week.

The following guest co-hosts are filling in for him:

Preparing for a move?

Ed has filled in on a couple of Hit Network shows this year, Hamish & Andy and I think Carrie & Tommy. Hit and Triple M are both SCA, and Ed is well known to both audiences, so I wouldn’t read too much into it.

I think the point is why is Ed being absent on his own show just to fill in for another?

Testing him out for a permanent gig.

Seeing as Osher is leaving the Brisbane breakfast, I’m wondering if he could be joining 2Day FM for breakfast next year as all the Bachelor series’ are filmed in Sydney? Could it possibly be Osher and Sophie for 2Day FM breakfast next year? The show would be a pretty powerful platform for the Ten franchise.

Sophie for Hit drive perhaps, with a couple of comics. Osher is a bit bland isn’t he for personality radio?

I doubt Osher quit Brisbane breakfast radio just to start in Sydney and citing reasons for him leaving because of his busy work schedule, there’s no way he could commit to a daily radio show with his shooting schedule for the added Bachelor franchises next year.

there’s no way he could commit to a daily radio show with his shooting schedule for the added Bachelor franchises next year.

Wasn’t he a bit on-again off-again on the Brisbane show too? I believe he was absent reasonably often due to other (usually Bachelor) commitments.
I’ve always got the vibe from the hit105 instagram that he was never really part of the team - probably because he was never in the studio, never at other events with the other hosts etc.

In a radio first the new extended Drive show programming, with four of Australia’s most loved and entertaining personalities, will broadcast to all 43 Hit Network radio stations, reaching an unrivalled 4.6 million listeners each week (3 million metro and 1.56 million in regional Australia), with a broad reach across all key audience segments, particularly women of all ages.

New friends Carrie Bickmore and Tommy Little have carved out a loyal audience of listeners with their natural chemistry and candour and have been huge hit across the network since they started this year. Audiences have been loud and clear with their wish for more and the show will be extended by half an hour to 4:30pm.

Sensational talent duo Dave Hughes and Kate Langbroek are long-time friends and have enjoyed a radio partnership with unrivalled kinship and will be making their Hit Network debut in January 2018.

Gemma Fordham, Hit Network’s Head of Content said, “We are delighted one of radio’s most enduring and hilarious duets, Hughesy and Kate, are joining our new Drive line up for 2018. The commute home is when we let go, relax and leave the work day behind and the Hit Network is committed to entertaining all people on their way, whether it is at 3pm, 5pm or 6pm. To be able to also confirm Carrie and Tommy, a show which just gets better and better, really does give the Hit Network and its audience the best of both worlds in 2018,“

On the announcement, Grant Blackley, CEO of SCA said “I’m absolutely thrilled to welcome Hughsey and Kate to the SCA family. Both are consummate professionals and wonderful entertainers and will be a great addition to the Hit Network’s already strong national Drive line-up with Carrie and Tommy”.