Posts and discussion relating to Aussie TV’s past.

Final sign off for Kay McGrath and Mike Higgins from TVO Eyewitness News in 1987. Of course Kay ended up with Seven in 1988. Check out the hair extension - a one off for the night

Final sign off for Kay McGrath and Mike Higgins from TVO Eyewitness News in 1987. Of course Kay ended up with Seven in 1988. Check out the hair extension - a one off for the night

What was the circumstances around Mike Higgins leaving?

And that blonde hair extension is pretty epic though totally on trend for 1987. For a newsreader to do something like that can be almost a sackable offence (Jo Pearson and Tracey Curro were both on thin ice after doing sudden changes to hair styles), so perhaps Kay thought she’s got nothing to lose… she’s already leaving

I don’t know the circumstances that saw Mike Higgins leave TVO after just 9 months. It wasn’t due to ratings as they were reported to be going very well especially after Seven introduced a one hour news.

The send off for Kay was very muted probably because she was changing channels. By comparison Des McWilliam had a highlight/blooper package, champagne and a bow tie that lit up

Here is Des McWilliam’s last bulletin and send off including a highlights package. Note that everyone wore a bow tie that night with Des’s being specially made at the station with lights. The line up for that Friday night as seen at the start of the clip included the 1987 Logie Award hosted by Don Lane.

And the promo for the Logie Awards that followed the news

Interesting year for TVO News in '87. Still a weird move Des moving aside for Mike Higgins. Was Mike leaving BTQ a protest against what was happening there and then leaving just 9 months into his contract with TVO? Nobody ever knew why he actually left. He appeared again exactly 12 months later at BTQ7 initially filling in for Kay whilst she was on leave then reading the weekend bulletin before leaving (again) at the end of '89.
Kay of course was lured across by former TVO owner, Christopher Skase to read the news on the news short lived TV-AM in '88 at his newly purchased ATN7 before she moved back to Brisbane in early '89 to front Seven Nightly News.

Interesting year for TVO News in '87. Still a weird move Des moving aside for Mike Higgins. Was Mike leaving BTQ a protest against what was happening there and then leaving just 9 months into his contract with TVO?

Interesting year for TVO News in '87. Still a weird move Des moving aside for Mike Higgins. Was Mike leaving BTQ a protest against what was happening there and then leaving just 9 months into his contract with TVO?

Yes, that is what I was referring to…

Just had a day trip to the Bunya Mountains in QLD. Mount Mowbullan is the location of Toowoomba’s TV transmitters. The tower pictured below is of WIN Television (RTQ/DDQ). With thanks to NRN11, he advised me that the old analogue channel 0 stacks still remain. 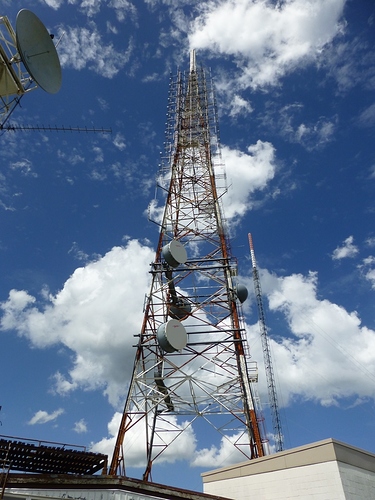 I also went past ABDQ’s transmitter site but missed getting a picture of that.

(National) Nine News Melbourne 2006 opener a few weeks after the relaunch of 9. The only station to use the traditional Cool Hand Luke theme.

Today, 5 January 1986, marked the last day that SBS was being broadcast on VHF Channel 0 in Sydney and Melbourne. Apparently there wasn’t much fanfare about the switch-off, although SBS had been promoting UHF conversion for years, and AFAIK there was nothing in the way of on-screen messages after the 5th. Tuning in to 0 after the 5th just returned static. Press reports at the time indicated that SBS and the Department of Communications were fielding heaps of calls from viewers wanting to find out where SBS had gone.

One of SBS’s pre-UHF promotions was a 10-minute documentary that used to air at various times of the day around 1983. This promo clip is a somewhat condensed/trimmed down version of that original documentary, used to promote the pending arrival of SBS in other cities.

EDIT: This article from The Age in 1986 reported that migrant communities were of the opinion that forcing SBS to the UHF band was a form of discrimination https://news.google.com/newspapers?id=_jNVAAAAIBAJ&sjid=FJUDAAAAIBAJ&pg=2907%2C588754

Station promo for the “silly season” and short ident

These old videos are great!

Actually the WIN owned Adelaide use the bell theme as well from 05-08. GTV actually briefly used the 06-08 theme before switching back to the ‘cow bell’ theme in February.

Some elemnts of nine’s 2008 on air presentation - looking very pastel compared to today.

surprised that more Adelaide media didn’t seem to note the passing of Lionel Williams, who was a regular TV identity in Adelaide for over 30 years. He passed away earlier this week but the only media reports I can find online are The Advertiser and Seven News – the latter is a curiosity as Williams (as far as I know) never worked for SAS and Seven’s story included mostly historical material lifted from Nine and YouTube.

Not sure if Nine or Ten News mentioned anything, and he was a long-term employee of both channels in the past (especially Nine, where he was there since day one).

Yeah I agree never liked them.