Freeview today announced that its world-first mobile app, delivering FTA TV channels with just one click, will launch in November. The new live streaming service is branded Freeview FV and will deliver TV into viewers’ hands, extending viewing out of the home.

Freeview FV features will include:

(apologies to anyone with a stutter!).

very catchy name …for a product no one will use

Don’t see channel ten participating in this, seriously they don’t even have their channels on full time streaming.

They’re a member of Freeview aren’t they? The information provifded is that ALL free to air channels will be live streamed, so I don’t see why they wouldn’t be involved. Maybe this is what they were waiting for instead of using bandwidth or adding extra costs to the network by streaming all of their own channels and rather just airing select local programming only.

[quote=“ShadowDan, post:4, topic:1951”]Don’t see channel ten participating in this,
[/quote]
I want WIN to be streaming then!

WIN are not a member of Freeview.

It’s set to feature one digital channel from each network, Ten, Nine, Seven and ABC.

However it has not yet been confirmed which channels will be available or how much data the app will chew through.

‘More than 15 free-to-air channels’ indicates all primary and multichannels of all networks, but the Ten story says only 1 digital channel from each network? Is the Ten story wrong, because it doesn’t add up.

Report on this just aired on TEN News in Melbourne.
It said 15 of the 25 channels will be on the app, with at least 1 channel from each “major network”.

I think we can fairly certainly lock in the following channels:
Seven
7Two
7Mate
7Flix

That makes a list of 12. So maybe add SBS to that list - and than will it be Ten or the ABC that add the rest of their channels.

Surely not that racing channel. It would be pointless.

The app is now available. All channels aside from Eleven, SBS2, NITV and Food Network. Ten and One still appear to only be streaming when they currently are rather than full time.

In a world first, Freeview has launched a new free mobile app, Freeview FV, allowing Australian viewers to watch live streaming of 16 TV channels and catch-up content from all free-to-air networks on the go.

Consumers will have links to access to catch-up content from all the free-to-air networks including SBS On Demand, ABC iview, PLUS7, 9Now, and tenplay.

Developed by Freeview, the new Freeview FV app is available on iOS iPhone, iPad, and Android phones. In addition to live streaming and catch up, the simple-to-use Freeview FV app offers other great features including:

CEO Liz Ross said the app was ground-breaking for TV viewing and gave people more choice and convenience than ever before.

“This is a fantastic new way for consumers to enjoy TV on their terms and never miss a thing, especially
when they’re on the go and away from home.

Ross said Freeview anticipated strong pick up, particularly among commuters, and believed the app will have a positive effect on summer TV viewing and beyond as it meets consumer expectations of convenience.

“Freeview FV is a very exciting step forward for the FTA industry as it continues to evolve and retain its
position as a global leader in innovation,” said Ross.

The mobile app can be downloaded through the App Store or Google Play. Freeview FV will also be able to mirror to Apple TV using AirPlay.

The launch of the app will be supported by a dedicated TV campaign featuring the Freemans family, transit advertising, digital and social media.

Ten and One still appear to only be streaming when they currently are rather than full time.

I finally thought TEN would be on board with this live streaming through the FV app, disappointing.

All channels aside from Eleven, SBS2, NITV and Food Network. Ten and One still appear to only be streaming when they currently are rather than full time.

Hopefully SBS makes their other channels available ASAP and Ten abandons the stupid and crazy policy they have in not embracing full-time live streaming of their channels.

Credit where credits due, well done to the networks for being able to come together to aggravate their content into one app/service. Would say one thing though, it would have been nice if the catch-up content was available naively through the app like the live streaming is instead of re-directing to the various apps (ala Hulu).

EDIT: In addition, Nine’s streams redirects to the 9Now app due to the login requirement - that should have been incorporated into the app as well

SBS2, Food Network & NITV are now available to stream. Just leaves Ten, Eleven & One as the last holdouts to having all FTA channels available 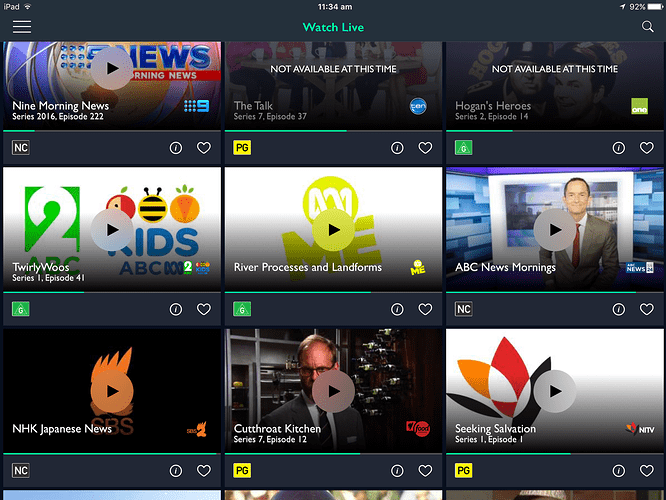