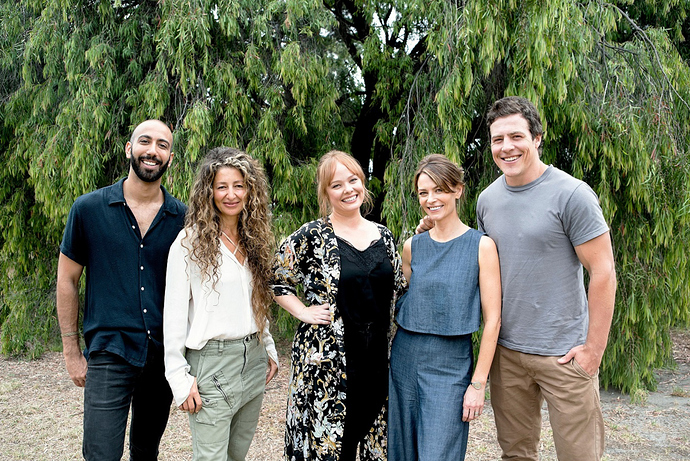 Summer has well and truly descended. And just when you think it can’t get any hotter, we’re turning up the heat with a sizzling Aussie drama.

After a few too many champagnes (and wines and whiskeys and beers), the solution to all of their problems seems to be buying a house together. A really big, five bedroom house.

How ridiculous, right? A recipe for disaster, surely? But the more they consider it, the more they realise that their alcohol infused idea actually has some merit.

Network 10’s Head of Drama, Rick Maier, said: “Who knew a singles table at a wedding could be this much fun? What happens next is the platform for a brilliantly original, sharp and contemporary series. We have our families, and we also have the random people we collect on the way.

“Writers Michael Lucas and Christine Bartlett have created a group of individuals we hope everyone can relate to. And it’s no surprise these scripts have been the draw-card for this outstanding ensemble. Hoodlum and Pino Amenta (Series Producer) will bring it all to life with a cracking production team and a definite spring in their step. Very much looking forward to this one. Five Bedrooms should be a treat.”

Hoodlum Entertainment’s Executive Producers, Nathan Mayfield and Tracey Robertson said: “ Five Bedrooms has been a labour of love for Hoodlum and we are thrilled to see it come to life with this loveable cast. The series was inspired by the dream to own your own home and the harsh reality of being able to afford it.

“ Five Bedrooms is a great platform for our fantastic characters to come together and find their place in this new unconventional family. We are excited to team up with writers Christine Bartlett and Michael Lucas and for the support of Network 10, Screen Australia, Film Victoria and Sky Vision who have been champions of this Australian drama from the outset.”

Screen Australia’s Head of Content, Sally Caplan said: “Hoodlum Entertainment have proven their ability to produce high quality drama series with both local and international appeal. The scripts are intelligent and relatable and I look forward to seeing this talented and diverse cast bring these characters to life.”

Five Bedrooms will commence filming in Melbourne tomorrow and is a Hoodlum Entertainment production for Network 10. Major production investment from Screen Australia. Financed with support from Film Victoria. Sky Vision to distribute internationally.

Coming Soon To 10 And WIN Network.

Finally something that doesn’t skew a heavy female audience like Playing for Keeps or My Life is Murder. Sounds pretty good from the description.

A much older cast than I was expecting when I first heard the concept.

At least with Steve Peacocke in the cast the show is guaranteed a TV Week cover.

Probably the least interesting cast member announced. Hopefully his acting has improved since he appeared in Wanted.

Since when was a TV Week cover a guarantee of acting skill?

Well, its almost a guarantee you will get a TV Week cover. Sam Frost has been on the cover six times or more this past year and she is the worst actress on Home and Away, if not the whole of Australian TV.

Good to see Kat Stewart, Doris Younane, Kate Jenkinson and Hugh Sheridan in the cast though. Not familiar with Katie Robertson or Roy Joseph, but good to see some lesser known cast too.

And a candidate for another Logie!

According to Screen Australia - 8 episodes.

Me too. I somehow envisaged the show being about young people pitching in to buy a house. Has it been filmed yet or is that just mindless PR about sizzling drama over summer?

I should have read it all. So the stuff up the top is just PR guff.

Yup, makes it sound like it’s coming soon over summer when in reality it won’t be. Disappointing

It might be on screen after Easter followed by Playing For Keeps later in the year. I don’t think they’ve started filming that yet.

Do you think they can film and edit in that amount of time? Not sure how it all works but 3-4 months seems like a very quick turn around. I was thinking more like August/September (similar time to Playing for Keeps this year)

Yes, they can. That sort of turnaround is usual for many shows.

I can see Five Bedrooms being launched alongside MasterChef and then Playing For Keeps alongside The Bachelor.

Good on them for trying it but I can’t see a story engine.

Well, why don’t you wait and see before passing judgement before even a single scene has been shot? A lot of people were bagging Playing For Keeps when it was announced last year but then it turned out to be a lot better than people were expecting.

I wasn’t passing judgment. How could I if I have not seen the product? It’s way too early in the morning to deal with your defensive passive aggressiveness so please desist. I’m saying I get it is a relationship drama, I just want to know more about the characters and how they relate to one another etc. So I can then get a better idea of where the drama will come from. I’m being impatient.

And I’m telling you to be a little more patient.