DRM - Is this the future of Regional and Remote Broadcasting?

This group is to look at the pro’s and con’s of DRM in Regional and Remote Australia. It is for the technical thoughts i.e (engineers, techs) and for those passionate about radio and those in the industry. It is to gather some sort of consensus from the ideas and thoughts of all of you. Your thoughtful contributions would be gratefully appreciated.

I have started this topic as a keen follower of DRM over the past 7 years. I come from a Broadcaster and Engineer background, working in all 3 sectors. I certainly do have my own views regarding DRM, and most likely some of this will come out in the reply’s I send. I do this in an entirely genuine nature and not for a slanging match between DRM and other forms of Broadcast Transmission Technology. I am really interested in your thoughts so as to gather a general insight for the use of DRM as a standard for Digital Radio for Regional and Remote Australia. Thank You.

A promising start thanks @Brad1.

Thanks CM, FM Digital discussion would be an interesting topic as it would cover other Technologies like DAB+ etc, my aim was to mainly focus on DRM. I certainly look forward to the many and varied thoughts that will hopefully be received. Thanks again.

A friend of mine is on holiday, approx 80km from Oodnadatta. No radio of extended duration since Woomera.

DRM on AM or HF would provide robust, much needed coverage to these remote areas. The recent flooding reminds us why radio is essential in such extreme weather events.

I think from a technical viewpoint, DRM is a great technology and would be very useful for digital broadcasts. Keys features being real actively cheap to roll out using existing infrastructure and also similar coverage to existing analogue services without the need to truckloads of repeaters.

Commercially and practically though, I just can’t see it being feasible to launch in Australia now with the only DRM compatible devices currently in the country being owned by industry and enthusiasts. The task of getting devices to enough consumers and into enough cars to make it worthwhile is near impossible now, at least in the short term. In metro areas, those wanting access to digital have already invested in DAB+. And in a time where most of the population is excellent access to streaming 99.9% of the time there’s little motivation to buy physical radios of any type, let alone replace once that’s already working.

When DAB+ launched in Australia it did so as part of what in hindsight was a technical revolution. TV was going digital, so it was expected that radio would do the same, so it was comparatively easier to get people to go out and buy new devices because they were already in that mindset for TV. It was also a time when people where starting to want addition services but the internet was unable to deliver.

I just think that regardless of technology, launching a new digital technology now would be very challenging. If it were to happen, it would take years before market penetration, particularly in cars, was high enough to make it reliable for emergency communications and other application which require good access, during which time the early adopters may desert the technology.

The ABC’s DRM from Wangaratta on 747KHz has recently changed from Radio National to Double J with a higher bit rate and full stereo. Very impressive sound quality and even with some bad electrical interference during a recent thunderstorm, no drop outs. It is indeed a robust system. 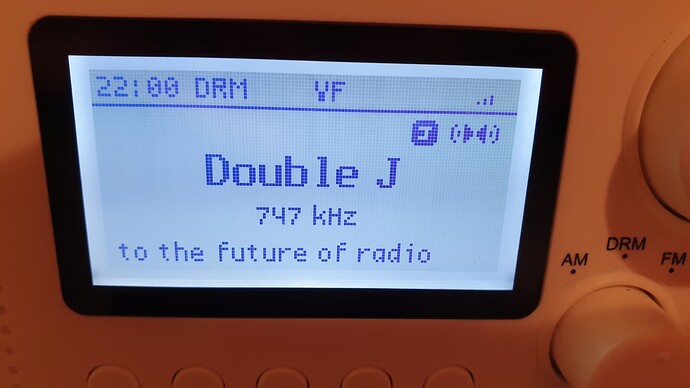 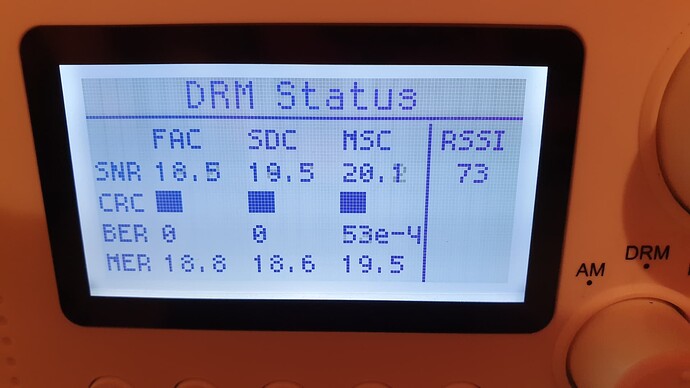 Radio New Zealand’s DRM service is excellent. Easily received in Aus. They not only run news via text, but also their frequencies and times. Very Handy if you don’t have the broadcast schedule handy. 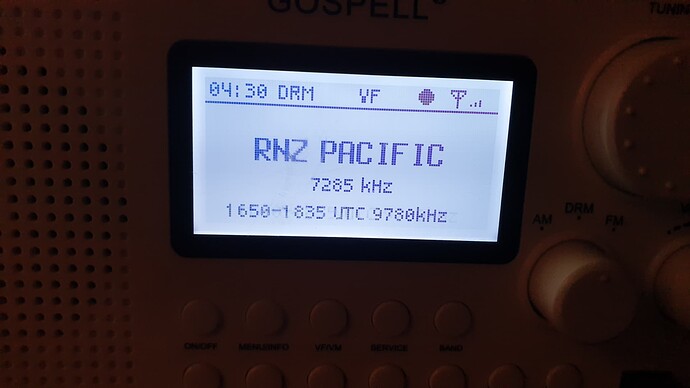 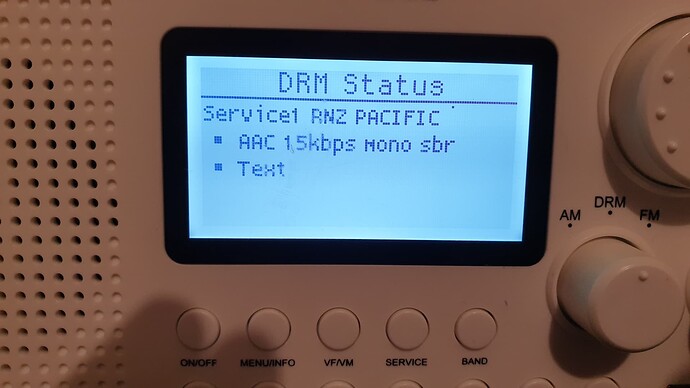 My 2 cents worth, in a vast country like Aus, AM provides large coverage and with DRM (HF,MW) up to 2 services can be run on the one frequency. It only needs a quarter of the output power to achieve the same coverage. Very economical to run. Another major factor is it’s ability to use existing frequencies so very spectrum efficient. Broadcasters are in complete control of their digital chain (unlike DAB+). Existing antennae arrays and infrastructure can be used and most reasonably new Transmitters only need a simple mod to start broadcasting in DRM. Another important feature of DRM is that it is open source. No expensive fees to third parties. In the case of DRM+ for FM, all the above stays the same including simulcast mode, so the existing analogue service does not change. The DRM component fits within the 200KHz Bandwidth of an FM Broadcaster and up to 3 high quality services can run including the existing analogue service, and all on the Broadcasters allocated frequency. No need for ACMA to find new frequencies, cheap and easy to run, and the best way to get digital into Regional and Remote Australia. DRM also offers a full text service, slide shows and Emergency Warning Function. Of course there is the old chestnut that receivers are to expensive. So were STB’s and Digital TV’s when they first appeared on the market. I also think this is a perfect way that Community Radio can start running Digital due to it’s cost effectiveness, and with more DRM Broadcasters and more content, just like DTV, there will be more demand for receivers which will bring them down in price. In fact, DRM receivers are being mass produced throughout Europe and India. Chip sets are readily available and DRM is in several models of European cars. With DRM, I liken it to when FM hit Aus, most radios were AM only. FM receivers were expensive. In Analogue we had AM and FM, so I see with Digital we have DAB and DRM. Sure there are some downsides, but the pro’s certainly outweigh the con’s. I base my above comments not only from a Broadcast Engineering background, but spending 4 years actually intently listening and evaluating DRM on MW, SW and VHF (FM) and making comparisons with DAB+ and existing analogue not only technically, but from a listeners point of view.

The ABC’s DRM+ service on 95.9 MHz from Albury at 1Kw is a perfect example of just how economical DRM is. Almost equal coverage to a 10Kw analogue FM service. They are running 3 High Quality Services along with slideshows, news, and other text services. FM spectrum is becoming so scarce now, so one DRM FM transmitter can allow 3 broadcasters to run. I would like to see community radio take the lead, just as it did when establishing the FM band in Australia. Due to it’s affordability, there is no reason why the 200+ regional community broadcasters can start implementing DRM without the loss of their existing analogue service, and all on their allocated frequency. Once we see this amount of DRM broadcasters and the vast increase in content and diversity, demand will naturally grow.

In fact, DRM receivers are being mass produced throughout Europe and India.

Are they but? I think this myth has been debunked link

With DRM, I liken it to when FM hit Aus, most radios were AM only. FM receivers were expensive. In Analogue we had AM and FM, so I see with Digital we have DAB and DRM.

Admittedly I’m coming from a metropolitan area and while I’m sure DRM and DAB can co-exist lets not forget when FM hit Aus there was no internet, smart phones, apps, smart speakers, podcasts, Spotify, etc. Can DRM establish itself and thrive in a Country with so many alternate options for aural entertainment? Will the regional and remote market be large enough to support the introduction of low cost receivers? You do have to wonder if the large markets of India and Europe have failed to deliver on this promise how will the tiny regional and remote Australian market deliver on it?

I did read somewhere that BCNZ use the shortwave DRM transmitter at Taupo as a program source for their South Pacific islands FM rebroadcast sites - it must be rock solid for them to be able to do that and would obviously be a lot cheaper than a satellite transponder lease. On Wednesday 29 June 2022 the ABC and the Australian network operator BAI hosted a demonstration of Digital Radio Mondiale...

Yes, that’s taken a long time to get out into the public general knowledge, there’s plenty of people in the broadcast transmission industry who, until this report came out, & maybe still don’t know anything about it, or that it was even happening.

I’ve spoken to quite a few techs currently in the broadcast transmission industry (not just studio techs for radio), over the past 2 years, who had no idea these DRM tests were being done, with a number of them saying they’ll look further into it now that I’d brought it to their attention.

The ABC also refer to the success of both DRM trials in their ACMA submission on AM conversion that @TV-Expert helpfully posted recently.

its good Joan warner has gone from CRA… saying the letters DRM made steam come out her ears. she had a very narrow view on digital radio. It was DAB+ or bust

I would Use High Frequency for Digital Radio Monidale for ABC’s National Stations as well as SBS.

In news just to hand, Broadcast Australia and ABC have confirmed the purchase of 2 x 100Kw HF DRM Transmitters. One to be installed at Shepparton and the other at Tennant Creek. They are estimating to have them operational by summer.

Where did you get that Information?

In news just to hand, Broadcast Australia and ABC have confirmed the purchase of 2 x 100Kw HF DRM Transmitters. One to be installed at Shepparton and the other at Tennant Creek. They are estimating to have them operational by summer.

Brad I think this is ancient information that for some reason keeps getting recycled as new news. Fairly sure BAI vacated Shepparton & land surrounding the building sold off.