I am getting that here too (via Sydney)!

And i just thought it was me having a momentary reception issue, given I am 105 kms from the Artarmon Tx site.

Glad you pointed that out.

Still, it’s irritating and you’d think that ARN would have noticed this and fixed it by now. I think it’s been going on for a week or so.

Thanks for filling us in on that. Was wondering why those two now defunct station names were still showing up. Even after rescans.

…And it’s gone. Off Air, according to my Sangean.

7RioLive is ready to go! It’s just a simulcast of Classic Rock Digital at the moment. 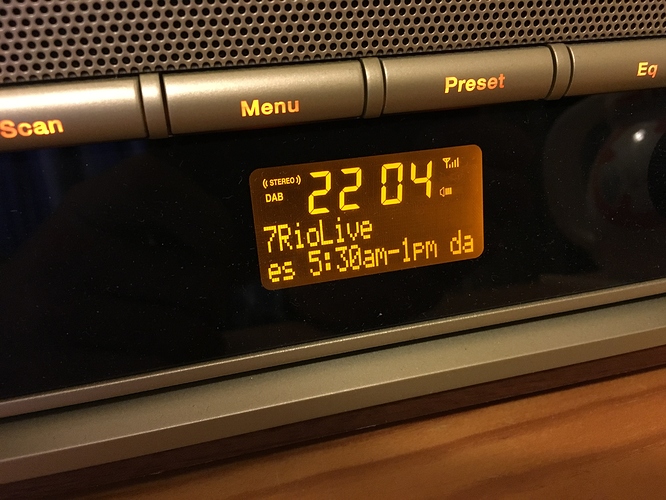 A post was split to a new topic: In-store Radio

Is anyone in Melbourne able to listen to Magic on DAB+?

I’ve checked them out a number of times on different radios and the audio quality is almost unlistenable during music. Which is its main form of programming! So many digital artifacts. And they’re running a 56k stream. Sounds like a bad 24k MP3 stream on the net.

Just wondered if anyone else had noticed this.

All the Magic stations have terrible sound quality when taking a feed from another state - it’s not much better online either - it’s barely better than listening on AM.

Interesting to note that Magic’s bitrate has dropped to 64kbps - it was 96kbps last time I checked a few weeks ago. No other MRN stations have changed, giving them 32kpbs currently not allocated. Could they be preparing for a new stations - Lifestyle Radio perhaps?

All the Magic stations have terrible sound quality when taking a feed from another state - it’s not much better online either - it’s barely better than listening on AM.

It’s a toss-up in Melbourne as to which is worse. The horrible digital artefacts on DAB+ or its AM outlet.

For probably five or more years now AM 1278 has had a deliberately restricted frequency response. There is absolutely nothing broadcast above 5 kHz. Which is totally weird since 3AW, which used to be on 1278 before they switched frequencies, had at least a 10 k response. Both stations were and still are owned by the same company. All they did was swap the audio feeds from the studios to the transmitters over.

Most AM radios have such narrow bandwidth that they don’t even reproduce 5 kHz. But there are plenty of radios that have a response to at least 8 kHz. On those radios Magic 1278 sounds like a joke. It’s like you’re listening to the station down a telephone line. It’s especially noticeable when you spin up the dial to their primary competitor 3MP which has the full 10 kHz audio and sounds great.

Don’t know why ACMA hasn’t jumped all over Magic 1278, aka 3EE, for not complying with the AM standards regarding the minimum frequency response that must be broadcast. Especially over such a long period.

I was listening to 2GN and the AM sounds great. Hope they will sell 2CH soon. I don’t mind the music its just the feed quality is average. Forever classic 2CH has a great ring to it.

Melbourne’s AM stations on analogue are absolutely terrible, unlistenable,

I did some testing of DAB+ Sydney recoption on the Central Coast in my new Ford Focus car radio yesterday.

Reception was virtually flawless from just north of Woy Woy down through Umina and Ettalong. Even being behind an apartment building didn’t cause drop outs.

Though I wonder if I was being assisted by the Bilgola Plateau repeater?

Elsewhere on the Coast, there were pockets of reception, but nothing really consistent enough to be listenable in the car while moving.

I’ve been incredibly impressed with the DAB+ reception across Brisbane north and south. You basically get uninterrupted perfect reception in the car from Caloundra turnoff to Helensvale on the GC. That’s 160km. So much for people saying in the past that DAB couldn’t match FM for coverage - it’s better! I know there are two transmission sites in SEQ but even so, it’s a flawless experience.

I plan to go down to Sydney within the next couple of weekends.

I will certainly be testing out DAB+ reception on the M1 and in the metro area.

Based on my experiences so far, I am also anticipating few issues in Sydney.

the bigger problem is heading out west. once i hit springfield lakes it goes, and i have nothing in Ipswich.

It’s a toss-up in Melbourne as to which is worse. The horrible digital artefacts on DAB+ or its AM outlet.

In my opinion this defeats the purpose of having Magic on digital, it used to sound great in digital stereo sound but not sounds exactly like an AM station heard on a tinny Tandy Realistic tranny! It’s like buying vacant land in Toorak then building a relocated Housing Commission slum house on it!

Though I wonder if I was being assisted by the Bilgola Plateau repeater?

Yeah, I didn’t think to check for the ABC stations!

I wil keep that in mind next time I am down there.

had NTS on in the car today to see if it had gotten any better. at 4:15 this afternoon they were running a news bulletin that was at least 24 hours (and i’d bet closer to 36) hours old.

now i know it’s a sunday but seriously… if it’s going to be that bad, your better off not running any news on weekends. i’ll check periodically though the week and see if it’s any better