The Nine Network will broadcast the 79th Vision Australia Carols by Candlelight spectacular on Saturday, December 24, at 8.00pm live from the Sidney Myer Music Bowl in Melbourne.

Internationally acclaimed singer Dami Im and indie-pop band Sheppard will join a star-studded lineup of artists making their Carols by Candlelight debut on Christmas Eve, including winner of The Voice 2016, Alfie Arcuri, and crooning trio The Koi Boys, in addition to Rohan Browne alongside his wife Christie Whelan-Browne – both stars of the stage and screen.

Hi-5’s all-new cast will dazzle the young at heart in their first official public appearance, headlining the children’s segment.

The Nine Network’s Lisa Wilkinson and David Campbell will reunite to co-host the show.

“This is my ninth year co-hosting Carols by Candlelight, which promises more outstanding performances and a few surprises this year to get Australians of all ages into the spirit of Christmas,” Wilkinson said.

“What better way to wrap up and finish 2016 than with a huge big bow, lots of tinsel, your loved ones by your side and Lisa and me, with our Carols family entertaining you while Father Christmas loads up the sleigh. I cannot wait to share Christmas Eve with everyone again,” Campbell said.

Note: Live only in AEDT timezones.

NB/
Do Nine have a deal with whoever runs the Carols?

One would think other networks such as Seven & Ten would have tried to get their hands on it?

Vision Australia (and its predecessor Royal Victorian Institute for the Blind) must have some kind of handshake deal with Nine, otherwise Seven and Ten would have wanted to bid for the rights. Remember Ten broadcast the Carols first in 1970 before Nine picked it up in 1979.
As noted elsewhere, Dami will be one of few artists to have performed on both Carols in the Domain and Carols by Candlelight in the same year.
As usual the Carols will be broadcast on radio (analogue and online) especially for those outside AEDT timezones, including live streaming on Magic 1278 and 2UE. Details can be found here

It’d be a great pick-up for Ch 10 if they could get it back one day (not just ratings & promotion, including BBL) but also ad revenue.

Nine inexplicably let go of the Sydney NYE Fireworks, so who knows what could happen in the future.

Not as much irrelivant mush at Candlelight as oppose to the Domain. All those plus for Disney was getting out of hand. But at least the only entity that gets constantly plugged is Vision Australia which I have no problem with.

it was 60 years ago that Carols By Candlelight was broadcast on TV for the first time, as part of GTV9’s pre-launch test transmissions. 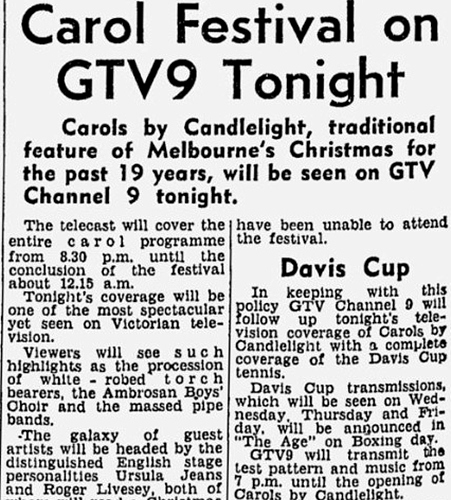 But despite the popularity and longevity of the event for some reason it would be 1969 before Carols was telecast again… and it wasn’t on Channel 9. It was ATV0 that had the rights to broadcast Carols from 1969 to 1978, then GTV9 got it back again from 1979 and it’s been there ever since.

If I recall there’s only been a handful of hosts in the history of the event on TV. Since 9 took over I can only recall Brian Naylor and Ray Martin doing it before Lisa Wilkinson’s first hosting gig (first with Karl, then with David who I assume may pull double duty tonight).

If I recall there’s only been a handful of hosts in the history of the event on TV. Since 9 took over I can only recall Brian Naylor and Ray Martin doing it before Lisa Wilkinson’s first hosting gig (first with Karl, then with David

I think that is right.

I am not 100% certain but I think Phil Gibbs, who was ATV0’s chief sports presenter, was the only Carols host for the 10 years that Channel 0 had the rights.

Start of the 1984 carols - the first to be broadcast in stereo. (starts at 1:00 after Stereovision promo).

A 2RPH banner ad appeared on TCN9 a short while ago.
I dare say similar banners appeared in other cities for local RPH / Vision stations 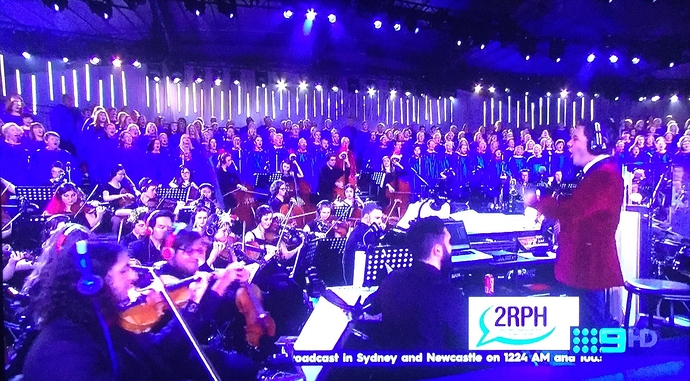 There definitely was one for Melbourne, promoting Vision Australia Radio’s simulcast.

Also noticed that they have the LIVE tag too

After watching this tonight, I still have no idea how anyone watches the “Woolworths 3 hour” Christmas carols broadcast a week earlier on Seven. This literally shits over that joke of broadcast.

After watching this tonight, I still have no idea how anyone watches the “Woolworths 3 hour” Christmas carols broadcast a week earlier on Seven. This literally shits over that joke of broadcast.

Opposite, I’m watching Carols by Candelight tonight for the first time properly and missing the energy of the carols in the domain. This seems very somber in comparison IMO.

But each to their own.

No radio simulcast in Brisbane from what I could gather. Usual broadcaster 4BC was taking 2GB programming and Magic was taking their usual network music feed.

Wasn’t it on 4RPH either?