Cannonball takes flight on Seven - the ultimate water battle is coming to Australia in a spectacular outdoor game show.

In CANNONBALL, 15 daredevil young couples compete in a fun and action-packed water battle set on a lake. Across several rounds covering distance, speed and height, each couple attempts to jump the highest, slide the furthest and fly the highest in order to be crowned the champions.

Will the human cannonballs reach new heights or will their efforts end in an embarrassing belly flop?

Seven’s Director of Network Production, Brad Lyons, said: “Australians of all ages will be cheering on our fearless contestants as they attempt to fly further, faster and harder than their competitors. Expect high-flying thrills and stupendous spills – Cannonball’s got it all!”

CANNONBALL will go into production in Sydney later this year.

Is this just rip-off of Wipeout?

I think Wet ‘n’ Wild in western Sydney will be a good location to film Cannonball since it has the water slides. Or Penrith Lakes.
Could this show fill the 7.30pm timeslot on Sundays and Mondays in the 4th quarter of this year, if Seven decides to rest The X Factor?

Haven’t they already said it is being filmed on the Nepean River and using the facilities at Panthers?

Sounds like this should air on 7flix in the morning kids programming slot, surely they would’ve learnt with Celebrity Splash.

Rehearsals underway for the show 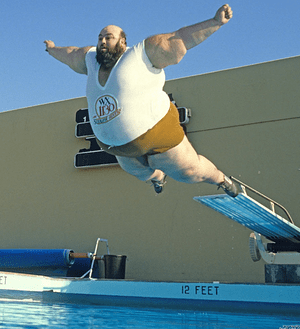 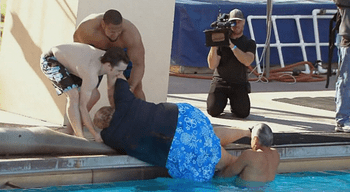 What is it with all three commercial TV networks coming up with these awful programs lately?

Of course, I personally hope that it (belly)flops in the ratings just like Celebrity Splash did!

The Daily Telegraph says today the show will only have four episodes and will be hosted by Rachael Finch, Tim Ross and Ben Mingay.

###CANNONBALL: the ultimate water battle is set to begin

In their first presenting roles, Ben Mingay (Home & Away, Wonderland, Packed to the Rafters) and Tim Ross (Wonderland) will co-host CANNONBALL, the family friendly competition where contestants aim to fly the furthest, slide the fastest and soar the highest – all to win thousands in cash and prizes.

In addition, Channel Seven’s Rachael Finch will report from the sidelines capturing all the action from the arena as it unfolds.

Ben Mingay said “The best part about this show is that our contestants need no special skills, it all comes down to gravity in the end“.

Tim Ross added: “Ben and I are excited to work together again. We can’t wait to put our colourful contestants through their paces… and everyone loves a belly flop”.

Based on a Dutch format, CANNONBALL takes place in a giant water arena containing a slide over four stories high, a swing nine metres above water and an inflatable ‘blob’ cushion with the potential to send contestants up to 12 metres in the air.

Each episode, 12 teams of two will compete in a series of rounds to slide huge distances, fly across the water and launch into the air at giant speed.

Each episode will also feature a pair of Star Jumpers - well known personalities who will attempt to take on the challenges.

CANNONBALL blasts off this weekend with filming commencing tomorrow at the Sydney International Regatta Centre in Penrith. Audience tickets are still available at www.cannonball.tv or www.visitpenrith.com.au

CANNONBALL is an ITV Studios Australia production created by Talpa and will launch later this year on Seven.

Filming continues tomorrow (Monday) in Sydney. To get free tickets to the event, head to Gate C Sydney International Regatta Centre at 10.30am.

Good thing it’s only four episodes. Wipeout gets old very fast and this will too.

Good God. Sad thing is it will probably rate well.

New 5 second promo aired during House Rules tonight. I noticed Ash Pollard from last year’s MKR and DWTS was in the clip, could she be a special guest?
I think the show could get a midweek timeslot.

Ben Mingay, Tim Ross and Rachael Finch can be seen in the promo.

I noticed Ash Pollard from last year’s MKR and DWTS was in the clip, could she be a special guest?

There are three other contestant’s from this year’s MKR too. Luciano Ippoliti is with Ash Pollard plus Alex Ebert & Gareth Cochran. I wonder if the teams have celebrities mixed in. I think they must be competing because they are seen in their swimmers/speedos.

From TVtonight, Ross assured that there will be unaired episodes coming to this year.

So, all of the episodes then.

And here I was hoping they might’ve just misplaced and/or accidentally thrown these “unaired” recordings in the bin never to be put to air.

The House Rules grand final has been scheduled for July 9. Perhaps Seven should show Cannonball in the 7.30pm timeslot 1-2 times per week as a filler, until MasterChef finishes, before Hell’s Kitchen Australia premieres?