Well, it fooled this idiot on twitter too. Surely if you are going to steal stories from news sites like Bradley does, you make sure it’s actually News? 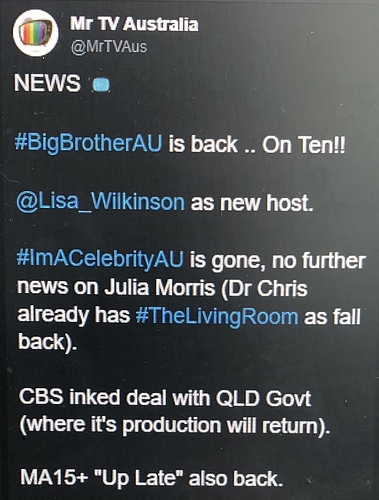 You’d think for someone who denied so vehemently that it’s him, he would try and disguise it a bit better.

You’d think that, but then again apparently you and Luke are one in the same.

How embarrassing that you fell for it

No further news on Julia Morris?

Blind Date With Julia Morris. The Must-See New Family Entertainment Series. [image] Network Ten is pleased to announce it has commissioned a new, contemporary version of Blind Date, hosted by Australia’s first lady of funny, Julia Morris. Warm and full of heart, Blind Date is a show for the whole family to enjoy. With Julia at the helm and a collection of would-be suiters searching for their ideal partners, comedy and compatibility will go hand-in-hand perfectly. Each week, one single perso…

What a low act by producers on this show.

A FORMER Big Brother contestant has opened up a horrific stunt that producers subjected her to during her time on the reality show.

Watched this the other night and thought the same thing. I remember that episode and actually thought something like that.

This is a pretty standard Big Brother task though. They have done this challenge many times on Big Brother before. I’m not sure if it was the first time that they did this task here or not but I’ve seen it many times on our local version and international versions. I know I’ve seen this task recently on a season of UK Celebrity Big Brother where they give them crying baby dolls and they have to look after them as part of the task. I highly doubt this was done to get a reaction from her and it’s a case where something probably wasn’t thought through properly given her circumstances.

Because the producers are never sneaky, tricky or manipulative?

According to David at TVTonight Ten looked at reviving Big Brother, specifically during summer, but couldn’t make the costs work.

I highly doubt this was done to get a reaction from her and it’s a case where something probably wasn’t thought through properly given her circumstances.

If you watch the show on ABC Kate actually mentions that the producers said you need to tell your story.

According to David at TVTonight Ten looked at reviving Big Brother, specifically during summer, but couldn’t make the costs work.

Can you post the article. I can’t seem to find it. Rumours are rife on a swag of new entertainment shows yet to be confirmed by TEN.

What are the considerations re Eleven showing the current Big Brother US season?

Hopefully they don’t BB US is horrible and nothing like our one. I would prefer for them to show BB UK. Given the Celeb BB US ratings on 9GO earlier this year I don’t think there would be enough interest.

Hopefully they don’t BB US is horrible and nothing like our one. I would prefer for them to show BB UK. Given the Celeb BB US ratings on 9GO earlier this year I don’t think there would be enough interest.

CBBUK is awesome. I’m surprised it’s not played on somewhere like Eleven.

True. I loved the latest Celeb BB that Courtney Act won. A new season is about to start next month, Eleven should look into acquiring it as their schedule is bare as it is and is filled with repeats.

Oh Ten when will you learn, stop flogging this dead horse known as Big Brother. As someone that has watched every season except the last season the audience just isn’t there anymore. There really is a glut of trashy reality tv out there and the only appeal would be live, unfiltered streaming and nudity which I can’t see happening. Also casting would need a complete overhaul and you know that wouldn’t happen. It would be Love Island in a house.

A celeb edition would flop too. Australia isn’t interested as much in the celeb culture that gives these shows a long shelf life (Big Splash, Apprentice etc.)

I think Love Island is a great indication where a Big Brother would rate. It would have its diehards but most of the general population would just ignore it.

Try some new concepts Ten, hard I know, but it could pay dividends.