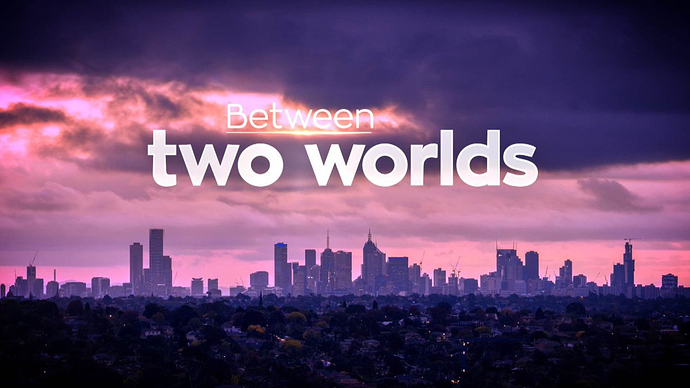 From Australia’s most prolific creator/writer Bevan Lee ( Packed to the Rafters, A Place To Call Home, All Saints, Winners & Losers, Always Greener ) comes an intense, high concept contemporary drama series about two disparate and disconnected worlds, thrown together by death and a sacrifice in one and the chance for new life in the other. Bold, daring, emotionally gripping, fast paced and unpredictable, BETWEEN TWO WORLDS will push the boundaries of popular commercial drama in Australia. BETWEEN TWO WORLDS is a Seven Studios production.

Good to see some drama investment. They’re on par with Nine now in terms of number I think.

Looking forward to this. Probably the only thing in the Seven Allfronts 2019 I’m really interested in.

Anything Bevan Lee - made is amazing.

Do I sense a Sons & Daughters vibe to this new drama?

This looks like big budget Aussie drama and should be a welcome announcement in the local industry.

Detail is scant but it sounds very innovative and exciting. I too am a Bevan Lee fan. I hope audiences respond positively to what sounds like a groundbreaking commercial television series.

Correct me if I’m wrong, but that backdrop is Melbourne, yet I suspect this series will be filmed in Sydney using the “A Place to Call Home” team & studio. So the two worlds may be a Sydney/Melbourne tie up. Sons & Daughters, which was Bevan Lee’s first series as a writer, had a similar type tie up.

He is without a doubt one of the most talented tv creators around (headLand not withstanding).

So the two worlds may be a Sydney/Melbourne tie up. Sons & Daughters, which was Bevan Lee’s first series as a writer, had a similar type tie up.

I hope it isn’t just a Sons and Daughters reboot.

I was thinking that the two worlds were a rich family and poor family whose kids get together but both families are against the union. Somewhat similar to S&D except they don’t turn out to be twins separated at birth.

I think it’s more a class thing rather than a city thing. A dramatic version of Bride & Prejudice

. The backdrop hints at a Melbourne location. I just assumed it would replace APTCH in their Sydney studio. Lee has produced in Melbourne on occasions (Winners & Losers). We’ll soon see.

This actually does sound interesting though.

According to Seven’s Director of Network Programming, Angus Ross, "This is something we’ve been working on or a while to get it to screen and putting all the financing in place. It’s very, very ambitious and we’re very excited about it,” It will debut in the second half of 2019 Ambitious and top secret dramas in 2019

Seven director of programming Angus Ross reveals more of his plans for 2019.

All this praise for Bevan Lee from Seven, after axing his last program. Let’s hope it does OK in the demos.

Just reading between the lines, it sounds like there could be an accident, someone dies, they either donate organs or maybe the widow wife adopts a baby out cause she cant afford to raise it to a rich family and there’s emotional ties/complications involved. Or it could be a supernatural sacrificing a goat “Stranger Things” type of show lol

Sunday Herald Sun’s Fiona Byrne did an extensive interview with Bevan Lee recently. Bevan describes Between Two Worlds as “Empire meets This Is Us and has a baby” (referring to two US popular drama series) and calls it “the best thing I have ever written”. Empire is set in a music and entertainment company, so does it mean Between Two Worlds will also have a music industry storyline?
Bevan also says he has been planning Between Two Worlds for three years (while also working on A Place to Call Home). I hope all his experience and hard work pays off.

oh no, well this isn’t for you

Empire and This is Us never captured the hearts or minds of Australian audiences so I hope Between Two Worlds is distinctly Australian and different enough.

Using those two shows as examples it sounds like a rags and riches story.