Meet the stars of Australia’s number one lifestyle program as Better Homes and Gardens Live sets to offer creative inspiration to Sydney and Melbourne.

Channel Seven today announced its flagship lifestyle program BETTER HOMES AND GARDENS, along with its magazine team, will bring their content live and interactive to fans all under one roof at Better Homes and Gardens Live.

Host Johanna Griggs, alongside the presenters of BETTER HOMES AND GARDENS, will deliver presentations and workshops offering tips and tricks for every aspect of your home.

Best New Talent Logie Award winner Adam Dovile and Jason Hodges will demonstrate how jobs around the home are easier than you think in the DIY & Building zone. Chefs Karen Martini and Fast Ed Halmagyi will set tastebuds alive as they share their delicious recipes to a live audience in the Food zone.

Jason also teams up with Graham Ross in the Gardening zone to share their green thumb secrets on how to get the very best from your garden – any shape or size! Tara Dennis gets decorating with all things beautiful, showcasing plenty of ideas and products to add that ‘wow’ to your home in the Decorating & Craft zone.

New to Better Homes and Gardens Live this year is the ‘Marketplace,’ a vibrant hub allowing fans to shop for unique wares varying from stunning trinkets and unique bags to custom made jewellery. A ‘Food Truck Arena’ will feed hungry stomachs with an array of gourmet and street style food, plus the ‘Presenters BBQ’ offers fans a chance to catch up with the cast in person as they cook up a free barbeque.

Der. You must be a child, right?

Nope I’m in my late 20’s. Didn’t move to Australia until 1999. First time I saw Better Homes and Gardens, John Jarrratt wasn’t in it.

OK. Fair enough. Do you know how he was married to Noni Hazlehurst?

Did not know that !

Back in the early 2000’s when we had one tv I watched it , used to be on with The Great Outdoors after it and i think Room for Improvement.

Back in the early 2000’s when we had one tv I watched it , used to be on with The Great Outdoors after it and i think Room for Improvement.

When lifestyle shows ruled the screen. Those types of shows were on every night of the week.

I watch the show for the first time in more than a month and notice a major change. Each presenter’s Instagram address is now introduced at the start of the segment instead of his/her full name.

I watch the show for the first time in more than a month and notice a major change. Each presenter’s Instagram address is now introduced at the start of the segment instead of his/her full name.

Sounds “major”. Don’t excite yourself too much.

Back in the early 2000’s when we had one tv I watched it, used to be on with The Great Outdoors after it and i think Room for Improvement.

If I’m not mistaken, the Better Homes & Gardens/The Great Outdoors combo was a major part of Seven’s Tuesday night schedule from 1995 until about 2002 when TGO moved to Mondays. Room For Improvement, Surprise Chef and maybe one or two other lifestyle shows ran in the post-BH&G Tuesday 8pm timeslot around 2002/03.

In 2004, Better Homes & Gardens moved to Saturday nights and the show expanded to an hour around that time before moving to Friday nights in 2005 (I think). The transition from Noni Hazlehust to Joanna Griggs as main presenter happened sometime before the timeslot move from Saturdays to Fridays, if my memory serves me correctly.

When lifestyle shows ruled the screen. Those types of shows were on every night of the week.

Yep, lifestyle programs were certainly one of the main program genres of choice for Australia’s commercial networks during the 1990s and even into the first half of the 2000s with varying degrees of quality.

Demi did mention on the final show last year she was leaving BHAG.

Next Friday (October 27) the show will be shown in full on 7TWO in Queensland due to the Rugby League World Cup on main channel. I’m not sure if this is the first time BH&G airs on 7TWO in the Sunshine State due to live sport. BH&G will also be shown on 7TWO in NT in full from 7pm, while the episode starts on main channel in NSW, ACT and VIC from 7pm before moving to 7TWO at 7.30pm.
Cosentino is special guest on next week’s Halloween special.

Would I be right by presuming that tonight’s the first time that Sydney has only seen the first 30 minutes of Better Homes & Gardens on the main channel with the rest airing on 7TWO locally?

Anyway, here’s a cap of the “7TWO Channel Change” graphic that aired before the main channel segment ended: 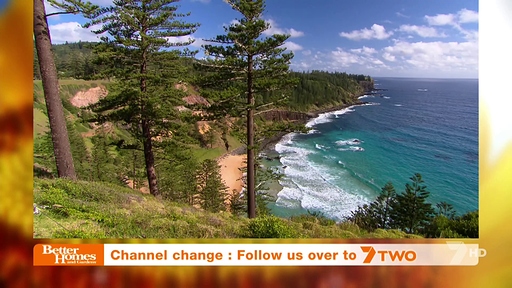 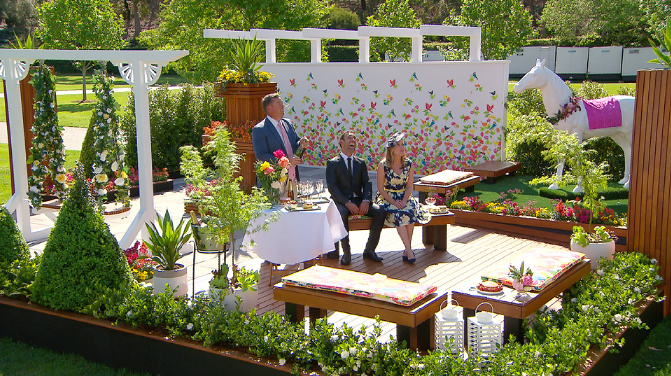 Channel Seven’s flagship lifestyle show BETTER HOMES AND GARDENS has been invited to create a garden showpiece on the grounds of Flemington Racecourse at this year’s Melbourne Cup Carnival, bringing racegoers the most inspirational garden design of the year.

Built across more than 100m2 of lawn, Better Homes’ multi-award winning landscaper Jason Hodges, has designed the grand garden to take in the colours and festivities of the carnival.

The garden features a raised lawn with seating pads, a deck with bench seating, ramped walkway and double formal columns topped with feature plants. Eye catching flowers will be changed daily, corresponding to the flowers specific to each race day.

All great garden designs require three categories of plants – structural, feature and bedding. On the structural plants, Jason has chosen syzygium and gardenias. “Both species offer good structural greens to build on, yet are also both very attractive plants on their own,” says Jason. Six spectacular conical pruned buxus will feature throughout the garden adding formality and elegance. The bedding plants will add a burst of colour with a mix of burnt orange and cerise snapdragons along with a mix of orange and cerise nemesia.

A large mural designed and created by Tara offers the perfect background for visitors to strike an Insta-worthy pose in their best attire. Tara is also creating a stunning flower garland that will rest on a horse statue featured inside the garden.

Adam is tasked with building a beautiful deck skirting the garden to allow a bird’s eye view over The Nursery. And to top it off, Adam is making a swing for those who need to rest their feet, take time out and smell the flowers.

Throughout the carnival, Seven’s stable of celebrities will be stopping by the garden, including cast members of HOME AND AWAY.

See the garden build from start to finish on BETTER HOMES AND GARDENS this Friday, November 3 at 7pm on Seven.

Needed more and better promotion about switching to 7Two in Sydney and Melbourne, not sure why the 7pm half-hour was also low.

But the entire program is on 7Two in Brisbane, should be their focus point.

Worst ratings all year last week, although it did give 7Two a big boost.

Australia plays France in the Rugby League World Cup this Friday night. I hope Seven will put in a better effort in promoting the switch from main channel to 7TWO in Sydney and Melbourne.

Melbourne are used to it though

New BHG promos for 2018 airing during the Aus Open.

Saying “after the tennis” and “coming to Fridays”

The new season could start on February 2 which is also the opening night of the AFLW season, but the following Friday is the opening ceremony of the Winter Olympics from South Korea. Can Seven accommodate both programs or will it rest BH&G for one week?