Back in Very Small Business

Back in Very Small Business

Don Angel is Back in Very Small Business 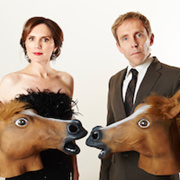 Back in Very Small Business finds Don (Wayne Hope) at the helm of the World Wide Business Group, where he and his business partner Ray (Kim Gyngell), have found success in their ‘Don’s Dirty Dog Wash’ franchise. Encompassing five other small businesses, the WWBG is staffed by an ethnically diverse, gender fluid, psychologically fragile menagerie, all hired on government subsidies. While Don enjoys the spoils of his burgeoning empire, he continues to be plagued by the consequences of both his morally questionable business practises and his delinquent emotional life.

Back in Very Small Business will feature a brilliant comic cast, showcasing some brand new faces alongside some of Australia’s finest performers. Full cast will be announced in December, when production begins.

Creators Robyn Butler and Wayne Hope said: “We’re extremely excited to be making Back in Very Small Business and we really hope there is room in the world for one more bombastic, emotionally stunted, shonky guy called Don.”

Featuring 8 x 27min episodes, the comedy series will be produced executive produced and written by Wayne Hope and Robyn Butler, with Butler also taking on directing duties. Greg Sitch and the ABC’s Rick Kalowski are the executive producers, with Gary McCaffrie completing the writing team.

The series has principal production investment from Screen Australia in association with Film Victoria.

Back in Very Small Business will commence filming in December and into the new year, and will air in 2018.

Super excited about this!!!

Back In Very Small Business

Don Angel (Wayne Hope), a trumped-up small businessman, strives to be happy by avoiding both tax and intimacy, only to be plagued by the consequences of both his morally questionable business practices and his stunted emotional life. With Don at the helm, the World Wide Business Group is unsurprisingly a hotbed of dysfunction, staffed by an ethnically diverse, gender fluid, psychologically fragile menagerie all hired on government subsidies. Besieged by racial and cultural difference, Don’s intolerance is gradually outweighed by the unexpected affection he feels for his business park family as he confusedly discovers that other humans might be what he needs to be happy.

So Emma Leonard is not back. I liked her in the first series.

So Emma Leonard is not back. I liked her in the first series.

There is a change to the character she played

Yes. I see from the promo. Interesting development.

Looks like they got an actual trans actor Roman Hadley-Lund to portray the character.

Is that Aaron Cheng?

Can’t believe it was 10 years ago? that show was last on.

Yes. As listed above in the cast list posted by @TV.Cynic

Don Angel (Wayne Hope) is an aspirational small businessman who helms his suburban empire, the World Wide Business Group, with equal parts zeal and tax evasion. The WWBG is a portfolio of frequently audited companies propped up by its flagship arm, Don’s Dirty Dog Wash. It’s been ten years since Don conceived the dog wash franchise and, thanks to its eye-popping fornicating canines logo, there are now dozens of the dog-on-dog fibreglass trailers on the road, sold largely by Don’s business partner, Ray Leonard (Kim Gyngell), who uses his talents as a former Walkley award winning journalist to entice wavering franchisees.

Success has afforded Don a large staff and his five other companies are managed by the best that government subsidies and 457 visas can buy. Surrounded by his ethnically diverse, culturally challenging and gender fluid employees, any intolerance Don feels is outweighed by price point and a genuine excitement that the World Wide Business Group is finally world wide - or at least third world wide. Don has embraced globalisation and several of his businesses - Doppelgänger Design (classic furniture at knock off prices), BRRR! (tiny, tiny outfits for the woman on a budget), Yaytionery (adorable kids’ stationery), Funny Dunny (the toilet paper for when you piss yourself laughing)-proudly boast budget manufacturing in various South East Asian countries. To advertise all his products, Don turns to his star employee - also his daughter - Sam (Molly Daniels), a Kardashian-coated-chip-off-the-old-block who runs the celebrity fueled social media agency, InfluenZer.

Don knows that the old adage ‘the best things in life are free’ is complete bullshit and the only thing that makes you happy is money. However in his incessant and devious pursuit of cash Don is plagued by the consequences of both his business practices and his stunted emotional life. When he begins to feel unexpected affection for his business park family, Don confusedly discovers that other humans might be what he needs to be happy.