Over the next two nights the final episodes ever of American Idol will air on Fox8.

They have gone all out for the finale. All the judges from every season will be returning as well as all the big success stories from the show.

Talent wise this season has been much stronger than the last few IMO. The top 3 would normally all be contenders, however LaPorsha would have to be the absolute clear favourite. One of the best performers the show has had. I also have a soft spot for Dalton. 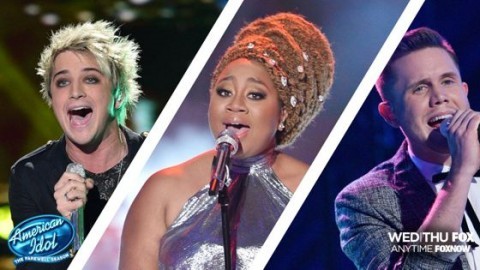 Good to see Fox8 air the finale live.
All 3 have been very good but Dalton is a bit too much style over substance.

It was right for Dalton to come third but I think he Dalton could do well after the show. He has the look and appeal about him. The others as great and deserve to be final 2 talent wise but we have had many singers like them before.

That’s a horrible idea. American Idol was rapidly declining each season and it is way too soon for a revival IMO.

Reports now suggest ABC is in discussions with FremantleMedia to revive American Idol, and show it on Sunday nights from March 2018. Ryan Seacrest confirmed the rumours on Live With Kelly and Ryan (also on ABC) on Monday, adding it was news to him but doubted if he could host the show again given his media commitments.
I think it is too soon to bring back American Idol. It enjoyed a long successful run on Fox last year, I am not sure if fans would like to see it resurrected and aired on another network.

EDIT: ABC confirmed today (May 9) during Good Morning America that American Idol would return in the 2017-18 TV season. GMA’s Amy Robach said judges and the host will be announced at a later date.

ABC has confirmed the show will premiere on Sunday, March 11. Lionel Richie and country singer/songwriter Luke Bryan will join Katy Perry as judges.

FOX8 will fasttrack the new season of American Idol on Monday and Tuesday nights from March 12.

Has anyone watched the new “American Idol” yet? Maybe I’ll watch it after the audition episodes.Lionel Ritchie should be a good judge,he’s had a long career in the music industry,not sure about Katy Perry,

The judges are pretty good. They have been offering decent criticism and are generally supportive. The biggest problem is it is basically the same show all over again, could have got rid of Seacrest and it wouldn’t have been a big loss.

My biggest irritation was it went along the modern way of one audition then ad break and repeat for two hours.

To be honest with a show like Idol you cant do much to change it up to be honest.

I have watched some of this. Katy Perry is a really good judge for this show. She’s current, relevant and a ball of personality. I find the other judges boring though.

What I find interesting is how much they still refer back to previous seasons and giving people another shot etc. I think they should have approached this season as a fresh beginning. It just feels like the show never went away.

The biggest problem is it is basically the same show all over again,

That is Idol’s biggest strength for me. It’s so much nicer to watch, especially at this stage, where it’s just the judges and performer in a room without screaming crowds or dumb gimmicks of choosing teams. Idol is simple. Probably doesn’t bode well in the era of every show trying to outdo each other in craziness, but it’s the only talent show I actually enjoy watching.

I’ve just watched the first audition episodes,there’s the usual sob stories but that’s what reality TV is all about.Theres some great singers so far,some not so good.

[quote=“Chris, post:13, topic:1080”]
Katy Perry is a really good judge for this show. She’s current, relevant and a ball of personality
[/quote]I agree Katy Perry is a great judge so far,so is Lionel Ritchie

From all the contestants I’ve seen perform so far I like Cade the rock dude.Hope he does well

I lost interest after the first few audition shows, but tuned in last night to see the Top 24. Does Katy always behave that childish. Particularly with Cade’s performance, she made the whole thing sexual, and no just like for a few seconds, for like the whole judging part. Awkward and cringe. Won’t be back. No wonder it’s likely to get cancelled after this season.

Where did you hear that its likely to get cancelled this season? Its not doing that bad in the ratings and ABC are not going to pay all that money to bring it back from cancellation only to turn around and cancel it after just 1 season on the network. Without Katy Perry the show would be boring.

I just Googled American Idol ratings and found articles like these. But then it won the night last night, so maybe not.

Sorry, Katy! As NBC's hit The Voice continues to delight fans, ABC's American Idol reboot is likely getting canceled after this season, RadarOnline.com has exclusively learned. According to a netwo... ABC’s revamped “American Idol” suffered another loss on Monday night as NBC’s “The Voice” prevailed in the head-to-head battle of singing competitions by 28 percent.