AM and FM DX

And not even using up all of the CPU too 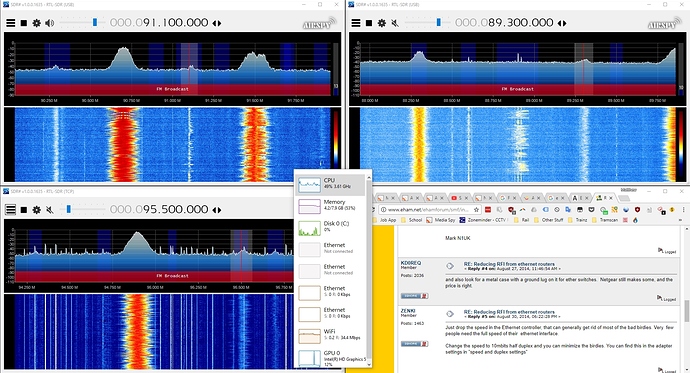 Strong Es in Launceston for the last hour or so

My “view” is very unsophisticated … 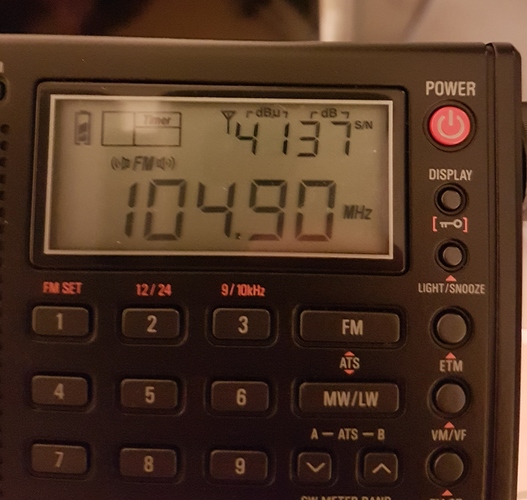 As I live in an apartment, external Yagis are kind of out of the question.

However, I rely on elevation at 140M ASL, being on a hill and 6 floors up with an excellent line of sight to the south in particular.

The above shot is my current reading of Triple M Sydney, which is pretty typical reception being 105km LOS to Artarmon… At 41db signal strength and 37db SNR.

There are several other stations possible, but these proved impossible with the local stations in Brisbane. As it was a couple of the above were a challenge e.g.102.0 that is between 4ZZZ on 102.1 and hit101.9.

RDS for 1ERE and Inter; 1ERE has scrolling name field.

Ok, better than average reception here tonight, though there was some instability with Sydney high power stations.

I did log the following which are not uncommon at this time of year.

Most notable was 101.1 KIX Country Nowra over 2LT Katoomba.

EDIT: ABC News Radio Bega 89.7 now making an appearance! No other ABCs from that region yet.

…and tropo expected to become quite intense on the NSW coast over the next few days (during tropo hours) according to the Hepburn tropo maps. Ionogram still showing SpE cloud over Sydney & Brisbane-unusual for this time in evening, but not uncommon.
Receiving ABC’s from Taree, 2BA + 2ABCFM Batemans Bay & 103.7 SkySports Radio Nowra.
A little later also 100.9 SkySports Radio - Bathurst

I’m currently getting hit102.3 & 92.7 Sky Sports Radio from Port Macquarie, as well as 97.9 ABC Classic FM from Coffs Harbour (couldn’t get others from there such as 91.5 JJJ & 92.3 ABC Coffs Coast) quite well. I’m also getting a faint 93.5 2PM Port Macquarie translator service underneath an equally faint Eagle FM Goulburn, along with 2WAY 103.9 (with ABC Newsradio from Canberra cutting in), as well as hit105.1 & 106.7 Triple M from Kempsey.

I couldn’t get 100.7 Triple M from Port Macquarie due to WOW Penrith.

I couldn’t get 100.7 Triple M from Port Macquarie due to WOW Penrith.

I’m receiving that station in this location. The signal isn’t as good as Hit FM 102.3, but still good enough to clearly hear a “The Mid North Coast’s Triple M” sweeper!

New Caledonia is back this morning.

Looking back at yesterday was able to ID some stations. 2BS was briefly received on 88.1 and commercial station on 95.7 was hit104.9 low power relay. Vision FM Bairnesdale on 97.5 a bit unusual.

Still haven’t IDed a Polynesian language station on 88.9 received from the north.

Meanwhile. Bay 93.9 has depressed this morning.

Over on the Mt Alexander. triple j Bendigo and Local Radio are coming in not too bad… 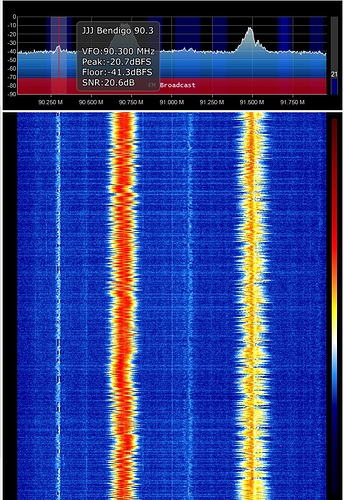 Can you post a video of your reception of the Polynesian language station on 88.9 FM?
Nothing comes to mind re 88.9MHz, but I’m not too bad with language recognition.
Date & time of reception & approx QTH region & propagation mode would all help but no guarantees.
Also listing of dx stations coming in at time. All ‘might’ help with tracking that station down…

I’ll see what I can do, thanks.

Another unid this morning with a Christian station coming in over the top of 90.0 Noumea for extended periods.

Later Airlie Beach on 89.9 then multiple Cairns North stations including Triple M with RDS. Also 4AM Ravenshoe with Superradio show and ID alternating with an unlisted 4JJJ outlet. Townsville also coming in.

Another unid this morning with a Christian station coming in over the top of 90.0 Noumea for extended periods

Turns out it was hit FM Riverina

Thanks - I had thought that but their stream is off-line and all other frequencies from Port Vila are blocked here or were not received.

Question - during today’s opening to Central and North Queensland, when looking up a JJJ station on 91.3 I came across “4ABCGS Dawson Mine Retransmission” which was the only thing that seems a possibility. There are two 6ABCGS at WA mines. Any idea about the call signs?

I remember coming across these unusual ABC callsigns once before & it just dawned on me now what it is.
ABCGS = ABC GrandStand, as in the ABC Digital Radio Service (DAB+) or their online service; most likely feed from satellite.
So content should be sport.

That said these mining stations prefixes don’t always match what content the techs should have on them.

A look at the ACMA records reveals that they have 3 FM txers. On one of these outlets they’re supposed to have Triple J; namely on 92.1MHz. Maybe the Triple J service is actually on 91.3MHz. A drive there or phone call/email should reveal the actual status. Give the techs at the mine site a call & they’ll often swap the program feed cables to the FM transmitters so that the content matches the ACMA records.

Yes - that’s what I was thinking that the feeds are fixed up. The other call sign used is ABCCT. Another site I noticed today that may be the same is Carmila.