Looks like from Monday week (according to the EPG) that the regular schedule returns and presenters return to full-time:

Stacey Lee is slated to present weekend afternoons this week from Adelaide, with Dan and Craig in Canberra on weekday afternoons.

Come on ABC News, this is stupid

It’s because it was 12pm and the bulletin starts on ABC TV at that time. I’d say they were introducing main channel viewers to the conference.

I was watching this at work and everyone in the room was confused about why they’d bother. You’d think it would be easier to just cut to Kirsten at the end of the conference, rather than potentially missing something important at the time they cut away at TOTH.

It’s because it was 12pm and the bulletin starts on ABC TV at that time. I’d say they were introducing main channel viewers to the conference.

It’s not just that though - it happens at every change in presenter and is unnecessary, especially when they are taking live coverage

A post was merged into an existing topic: ABC Online & Social Media

Jeremy Fernandez presenting the evening shift tonight filling in for Karina Carvalho who is on mornings covering for Joe O’Brien who is on leave at the moment.

Interesting (odd) programming choice today on the news channel. They cut away from the end of Paul Keating’s National Press Club address… to have Stan Grant summarise the session that hadn’t yet finished @joshgnosis
ABC cut away from Keating mid-sentence to analyse what he said. Interesting choice.

@PressClubAust
We're out of time on @ABCTV but we're still recording here at the #NPC. Check out ABC iview later for the full discussion with extended Q&A.
JohnsonTV November 10, 2021, 10:34am #1876

The Q&A with Paul Keating went for 1 hour and 18 minutes, according to the video uploaded to iView.

Patricia has been appointed presenter of RN Breakfast, so Afternoon Briefing may need a new host.

UPDATE: Patricia has confirmed on her Twitter that there will be a new host of Afternoon Briefing next year. Who do we think it could be?

That’s a shame she is a very good presenter on AB and holds many to account.

Matt Wordsworth hosted it the other month it was car crash TV.

Who do we think it could be?

Frankly, given the quality of the people who fill in for her ditching it has to be a reasonable option. 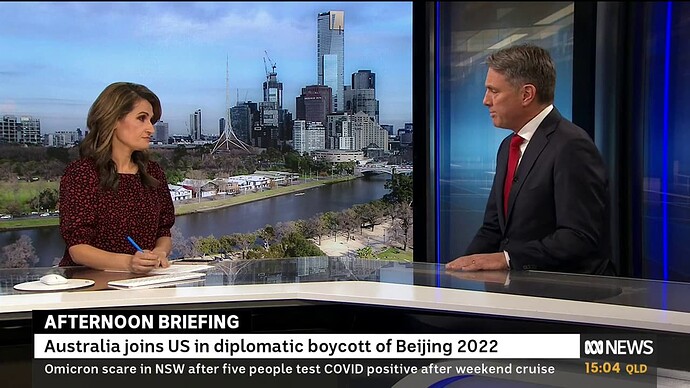 Really not a fan of that Melbourne shot. Its also about 3 years old.

Some interesting presenter changes from next week (December 12) according to the EPG:

Then Monday 20th the summer shifts of four hours begin:

Looks like he’s only doing Monday next week at this stage, Bev O’Connor is doing the late shift Tuesday and Wednesday.

Patricia has confirmed on her Twitter that there will be a new host of Afternoon Briefing next year.