Also, Ashwin Segkar has been covering the statewide Saturday Breakfast program the past few weeks (shortened and running 5am until 9am).

Emma Pedler has been hosting Australia All Over the past two Sunday mornings also. 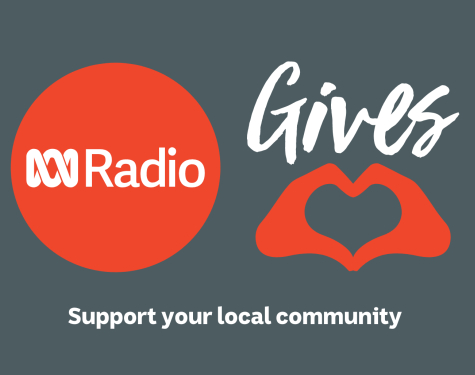 The ABC’s annual charity appeal, ABC Gives, has once again raised close to $1.5 million for those most in need in the lead up to the festive season.

Listeners from across the ABC’s network of eight capital city radio stations and 48 regional bureaux responded generously to the call for donations to OzHarvest, Foodbank and Tasmania’s ABC Giving Tree Appeal. The $1.5 million raised will provide more than 2.4 million meals for vulnerable individuals, families and communities, to be distributed across the year.

ABC Radio held “Days of Giving” in November and December which saw ABC presenters and prominent members of the community give their time and support to the event, including ABC Adelaide’s Breakfast presenter Nikolai Beilharz, who shaved his hair, ABC Sydney’s Breakfast host James Valentine offering a home jazz performance and Sydney Drive presenter, Richard Glover promising to pressure-hose a listener’s driveway. The appeal was also included in the ABC’s New Year’s Eve concert and fireworks broadcast.

ABC Director of Regional & Local, Judith Whelan thanked the ABC audience for its generosity. “December and January can be a very tough time of year with many families struggling to put food on the table. The money raised through ABC Gives will give a significant boost to the number of meals OzHarvest and Foodbank can deliver to those who need it most. In some cases, it will mean families will not go hungry.”

Foodbank Australia CEO, Brianna Casey, said: “Foodbank is so grateful for the support of ABC Radio and the ABC Radio Gives Appeal. On any given day in Australia, more than half a million households are struggling to put food on the table, with the cost of living the most common reason for people struggling. Thanks to ABC Gives, we are able to help those doing it tough right now.”

CEO and Founder of OzHarvest, Ronni Kahn said: “We are so grateful for the incredible support of the ABC community and to all the listeners and viewers who donated so generously. At a time when the need for food has never been greater, OzHarvest can now deliver an extra 880,000 meals to Aussies in need!” Australian media executive, Steve Ahern, has been appointed Manager of ABC Radio Sydney.Ahern has been acting in the role since...

ABC Melbourne off at with a major IT issue, we’re getting ABC Sydney Richard Glover doing his best to be inclusive including crossing to Melbourne traffic and including Melbourne weather.

News and statewide regional drive (not from Southbank) not affected which would normally be the back up so just be something well and truly fried.

ABC Melbourne off at with a major IT issue, we’re getting ABC Sydney Richard Glover doing his best to be inclusive including crossing to Melbourne traffic and including Melbourne weather.

The recording on the ABC Radio website unforunely is only the last hour it seems:

The big stories of the day, mixed with plenty of entertainment and lively debate.

Had a listen back to the previous programme The Friday Review. Sounds like amongst other issues the talk back and test lines were down. Raf cam on and described the core of the station was cactus which probably explains why Sydney took over rather than Ballarat.

Dr Vyom Sharma filling in for Jacinta Parsons on weekday afternoons on ABC Melbourne this week.

ABC Illawarra has been running extended local rolling coverage this lunchtime (over Conversations and Country Hour) due to a major storm with intense rainfall falling across the region, causing major road and flooding impacts.

The SES says it responded to about 20 calls in the Shoalhaven, including to a flooded nursing home.