As well as Afternoons, and Nightlife.

Suzanne Hill is the go to for Nightlife

Hopefully they can make sure their daily schedules are up to date.

Better than they do on RN. Haven’t seen a breakdown for a few years but I recall an article where 7:45 to 8:30 (news and AM) was the highest rating portion of the breakfast slot in most markets.

Waleed Aly will be filling in for Virginia Trioli over the next fortnight.

Catherine Murphy filling in for Matt Preston in Melbourne this morning.

i think they work on local radio. people who listen to local radio are not news junkies - otherwise they would be on newsradio. AM, the world today and PM are the right length to give good news analysis for non news people without being repetitive. than its back to the 5 min bulletin at the top of the hour

Waleed Aly will be filling in for Virginia Trioli over the next fortnight.

In Sydney, Chris Bath is filling in for Richard Glover, meaning she is directly competing with her husband Jim Wilson over on 2GB.

Josh Szeps is on annual leave, Renee Krosch is filling in for him.

Mary Gearin again filling in for Rafael Epstein on drive in Melbourne this week. 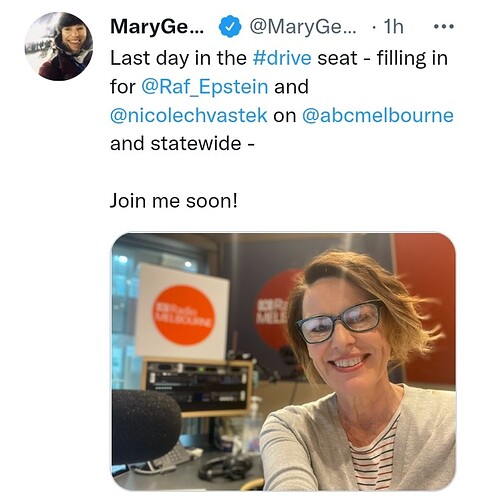 ABC Radio showcases the talents of Indigenous artists and voices throughout NAIDOC Week.

Simon Marnie will present his Weekend Mornings program for ABC Sydney from the 2022 National Indigenous Art Fair, at Overseas Passenger Terminal in The Rocks on Sunday July 3 from 10am-12pm AEST.

Also on Sunday July 3, RN’s This Working Life speaks with proud Torres Strait Islander woman Carla McGrath and proud Yorta Yorta man Ian Hamm about what First Nations perspectives bring to boards. The also look at how to best create systemic changes in your organisation to support and engage with First Nations communities.

On Monday 4 July Live At The Wireless on triple j will feature a live set from Tasman Keith.

Live At The Wireless on Double J will be the Electric Fields performance at Womadelaide on Tuesday July 5 at 6pm AEST.

ABC Perth will have Poppy Van Oord-Grainger and Ian Wilkes in studio on Tuesday July 5 to talk about the new virtual reality adaptation of their Perth Festival show Galup, about the history of Lake Monger, which is showing at WA Museum Boola Bardip in July.

On Wednesday July 6, Stan Grant speaks to Stan Grant Snr about preserving the “living, breathing, changing” Wiradjuri language in a special episode of The Religion and Ethics Report on RN and ABC Listen.

On Sunday July 10 Waka Waka woman Brooke Prentis presents a special edition of Soul Search on RN to begin her three-week stint as guest host of the program.

The Deadly Hearts playlist has been designed as the soundtrack to your NAIDOC Week. The playlist features hit songs reimagined by the country’s best Indigenous artists.