Network shares, especially for Seven and Nine, were significantly different across the five markets. Nine won in NRL markets with 30.2% in Sydney and 29.9% in Brisbane.

Perth viewers preferred multichannels the most with a 37.% share of the audience driven by 7Mate’s 5.7%. They were least popular in Melbourne with a 29.4% share.

The following table shows the difference in percentage points for channel and networks shares compared to the 2019 ratings period. Some muiltichannels have been excluded where a comparison can’t be made. The biggest change to an individual channel saw an improvement in ABC’s main channel share while Nine’s main channel suffered the biggest share loss. 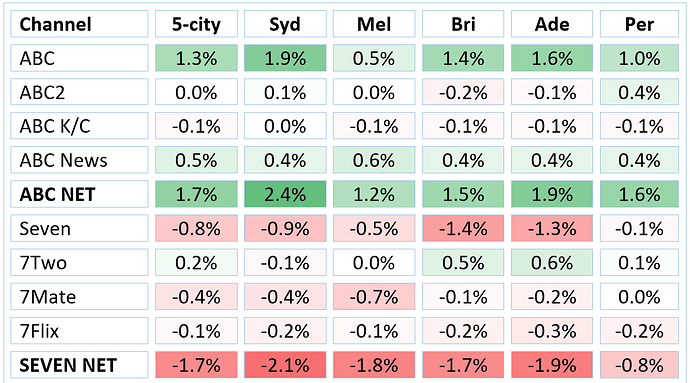 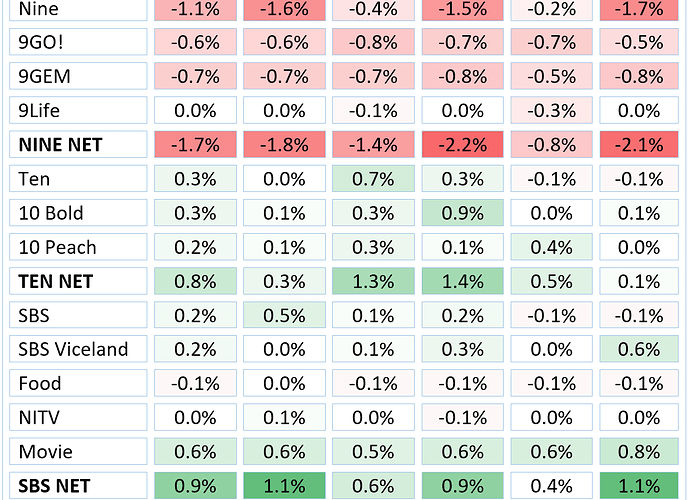 With the trend of Seven/Nine decreasing and Ten/ABC/SBS increasing being fairly consistent in all five metro markets I’d probably suggest that while the news/sports offerings of our two largest networks are quite liked by viewers, they’d probably also appreciate a wider variety of genres when it comes to primetime entertainment.

Also interesting to see how the ratings gap between the #1 and #2 rating networks tightened in Melbourne, South East Queensland and Adelaide while it increased in Perth and Sydney this year.

While the Seven Network and the Nine Network ratings were down from last year, ABC, SBS and Network 10 posted gains in ratings.
Nine Brisbane and Perth were considerably down from last year.
Meanwhile, Channel 10 were on the way up thanks to good ratings for Masterchef Australia and Junior Masterchef as well as HYBPA.
Despite the Primetime AFL GF this year, Seven Network’s shares were down by 1.7%. The Seven Network won in Melbourne by an extremely slim margin thanks to the AFL, however Nine won the primary channel by 0.4%. How could this happen? Meanwhile, Seven Perth was the strongest market for more than 20 years now with a staggering 33.0%. With Primetime AFL on 7mate, this provided a big boost in Perth.
SBS was strong in Perth market, while ABC remained strong in Adelaide.

Melbourne was neck-and-neck, with Nine winning the main channel (wonder when that last happened)? IIRC Seven (network) have now won Melbourne every year since regaining the AFL rights 13 years ago back in 2007?

You could argue it was (as always in recent years) the AFL that once again saved them, with record ratings this year, thanks to coronavirus, including more games in prime time and later in the year.

@TV.Cynic thanks so much for all your work here!

@TV.Cynic I’d be curious to know - do we have access to any data that shows the actual amount of viewers (say, primetime average 6pm-12am) for the networks?

The shares data posted hete does a great job showing us the movement between channels and networks of viewers, but shows us nothing about how many people are actually watching.

All this share data shows us is the shuffling of an ever decreasing pool of viewers between the channels every year.

We can say “ABC, 10 and SBS up!” But really they are all down, abs quite significantly. ABC, 10 and SBS just had a bigger share of a smaller amount of viewers compared to 2019

Nothing that is publicly available.

I would say most likely not. Again, it’s just a share - a percentage- not an absolute term. Yes, against STV, FTA increased its share of viewing year on year

News was up for a few months yes - but I would say it’s stabilized now.

We all see the numbers getting smaller every year

2020 Ratings Year Average audience - overnight, preliminary, unofficial I’ve included the weekend numbers to reflect some markets where the news shifts are not Mon-Fri. [image] Percentage change from 2019 [image] ABC showed the biggest increase year-on-year in the 5-city market plus for three individual bulletins. Nine had the biggest improvement in Melbourne, while 10 surprised by improving the most in Perth. 10’s Brisbane and Adelaide and Nine’s Perth bulletins rated lower despite COVID…

Can understand Brisbane and Adelaide, but what happened to Nine News in Perth?

Quite a few key programs improved their ratings this year. As per above the key news bulletins rated higher plus 6am - 12pm was up across the year plus afternoon news rated higher as well.

Some key titles that rated higher included MasterChef and AFL.

10 reported that their audience numbers were up 8% in total people in prime time, that included a 13% bigger audience for 10 Bold and 9% for 10 Peach. (these are changes in audience rather than shares).

But the networks make their money in 25-54

I could be wrong but I am guessing 25-54 viewership for all 3 commercial networks is down year on year as young adults migrate to streaming.

This is very worrying for networks. This is their income