10 All Access will offer more than 7,000 commercial-free episodes across platforms at launch. This will include the debut of three exciting CBS All Access original series in Australia – Tell Me A Story , One Dollar and Strange Angel – as well as the first season of CBS All Access’ The Good Fight .

Network 10’s Chief Content Officer Beverley McGarvey said: “How brilliant is it to be launching 10 All Access with three incredible CBS All Access original series in One Dollar , Strange Angel and Tell Me A Story ? They are three exciting series that have recently launched in the US. Outside of the originals, 10 All Access will be the place where people can enjoy the best binge-worthy entertainment from CBS and 10.”

At launch, 10 All Access will also be giving Australian fans access to new CBS prime time series months before they air on Network 10, including highly anticipated new series Happy Together as well as new seasons of current hits like MacGyver .

In addition, 10 All Access’ library will include current shows, past seasons and classic TV hits from Network 10 and CBS such as CBS hits like The Good Wife, NCIS, Frasier, Cheers and Survivor , as well as Australian favourites like Neighbours, The Bachelor Australia, The Bachelorette Australia, The Living Room and I’m A Celebrity…Get Me Out Of Here! .

Network 10’s Chief Executive Officer Paul Anderson said: “It’s great to be working with CBS to give All Access a fresh Aussie twist! 10 All Access fits perfectly into the 10 family and will play a huge part in our future. We want Australians to be able to discover our premium content wherever and however they are looking for entertainment and 10 All Access is an important part of that strategy.”

“The upcoming launch of 10 All Access marks another great milestone for CBS’ digital growth and expansion internationally,” said Marc DeBevoise, President and Chief Operating Officer, CBS Interactive. “From CBS All Access in the US and Canada to 10 All Access in Australia, we are dedicated to bringing our renowned programming directly to audiences however and whenever they want to watch.”

"The launch of All Access here is a unique opportunity to expand the 10 brand in the market and create more connections with Australian audiences," said Armando Nuñez, President and Chief Executive Officer for the CBS Global Distribution Group and Chief Content Licensing Officer for the CBS Corporation.

“It’s also a synergistic business strategy between CBS and 10 that expands the international footprint of All Access and complements 10’s existing digital platforms and the linear broadcast network."

I probably won’t be investing in this. The only show I like from the list is survivor at the moment.

Yeah they needed a big show to draw people in. I know that I would have subscribed if for example they brought back Big Brother using 10 All Access.

Or even big bang theory etc.

CBS has today also launched ET Live channel, to be incorporated into their US All Access:

CBS today made good on its plans to launch an Entertainment Tonight streaming service with the announcement of ET Live, a free ad-supported channel. 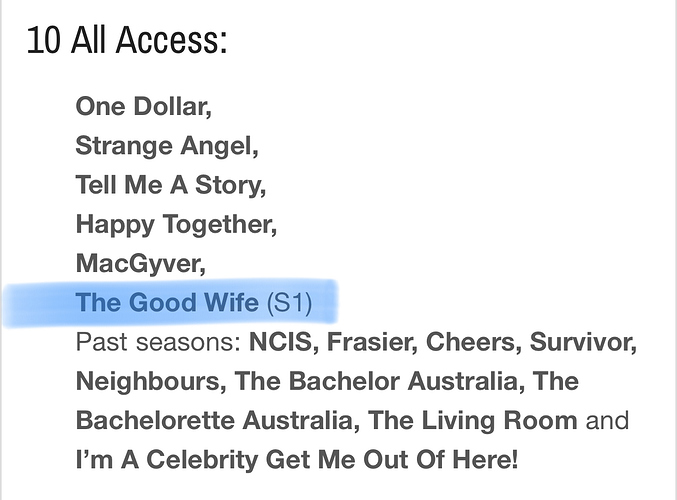 Could it possibly be because The Good Wife is on Netflix?

Courtesy Armando Nunez, in Angela Bishop report on 10 News First about the rebrand.

If the price is decent AND THE OFFERING is better what we are seeing , then I’ll keep it. It all depends on a few factors.

But for a start it looks to be a soft launch.

I’m assuming it is going to be $8 with ads and $12 without ads with a one-week free trial.

For mine I feel it is worth the investment even though I am really only interested in one series (Survivor) but it seems that other than that, there’s nothing really on offer.

Old seasons of Neighbours? I didn’t know this.

Are you sitting down? Because Network 10 and CBS have a HUGE announcement. The latest addition to their growing family, 10 All Access, will be gracing our shores this coming December, just in time for the silly season.

It sounds like from reading it , that any new CBS content will go here first rather than to a free to air network who buys it . Not sure though.

This service sounds like it is worth about $5 a month if that.

I assume it won’t have No Activity US either as that is on Stan.

I hope nearly all of the 7,000 episodes from launch will be Neighbours as there are just enough to fill a entire streaming service (nearly 8k).

As if that’s going to happen.

Neither Ten nor CBS own them anyway.