You're Back In The Room

Mesmerised rated 411,000 on a Thursday for its premiere and was axed immediately by Seven. Do we think something similar will happen with this?

Personally, I’d be very surprised if this show lasts more than three episodes. Then again, Nine did renew The Verdict for 2016 despite poor ratings so you never know what might happen…

As sammy123 said above, probably the only good thing to come out of this show will be a Gogglebox review (if they decide to review it, of course)!

DARYL SOMERS IS BACK IN A CRAZY NEW GAME SHOW

Showbiz legend Daryl Somers returns to television to host an uproarious new entertainment program when You’re Back in the Room premieres Sunday, April 3, at 7.00pm on Channel Nine.

Contestants in this truly hypnotic game show will have the opportunity to win big, but pocketing the cash will be anything but easy.

Standing between them and their fortune will be their own subconscious thoughts, because in You’re Back in the Room each contestant will be hypnotised by world-renowned hypnotist, Keith Barry.

Barry will put them through a series of crazy games where tasks need to be completed in order to win a maximum cash prize of $20,000 for their team.

After he has messed with their subconscious is when the fun really begins. Mayhem ensues as the contestants lose all inhibitions, making for the funniest television you’ll see all year.

The cash pot accumulates throughout the show before the contestants attempt to win as much as possible in a fast-paced final where they’ll have to work harder than ever to overcome their hypnotic hindrances.

You’re Back in the Room is a FremantleMedia Australia production of a BBC Worldwide format for the Nine Network.

Daryl Somers and You’re Back In The Room are throwbacks to another era
Just what are they thinking at Nine? The latest retro-tinged addition to Nine’s line-up is unlikely to do anything to turn around the network’s terrible start to 2016.

2016 has so far been a terrible year for Nine, which has seen previously dependable prime-time offerings like Reno Rumble crushed by Seven’s reality juggernaut My Kitchen Rules. The renovation competition has already been shunted out of its 7.30pm timeslot, and while it hasn’t been sent to purgatory – i.e. screening on one of Nine’s digital channels – the network’s scheduling filler has already been deployed on Wednesday nights: more episodes of The Big Bang Theory – one of them is even new.

When a television network is in a hole it can take a chance on new programming or fall back on the familiar. Given that Nine has decided to resurrect the cultural countdown clip show 20 to 1, you can hazard a fair guess as to which way they’ve turned. The underlying question is: can the repetitive You’re Back in the Room dupe a national audience?

Somewhere a pink ostrich is disconsolately shaking its head.

Another flop one would think

This sums it up nicely. I have to pretty much agree with this review. You would have to be hypnotised to watch this by the zzzzzzzzzz.

This show is trash. One of the most pathetic things i’ve ever seen. Who wants to watch people running around acting like children? It deserves to flop big time.

Oh dear. I’ve (probably sensibly) decided to refrain from watching this, but judging by the review on TV Tonight it’s possibly the worst show of 2016 so far.

Where’s Red Symons when you need him 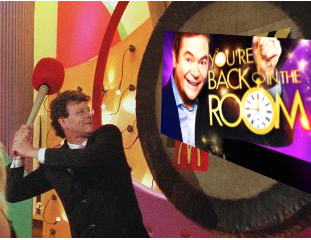 So - for next Sunday on Nine we have … 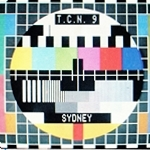 I have a question and it might give away the editing;

But does anyone think it’s weird that the audience is reacting to the specific “funny” bits that the cameras are showing as if there’s no other conversations or things happening on the stage?

This particularly comes clear during the hat thing. You couldn’t really believe that the other ‘contestants’ stopped talking to the ‘celebrities’ so only one person spoke at a time right? 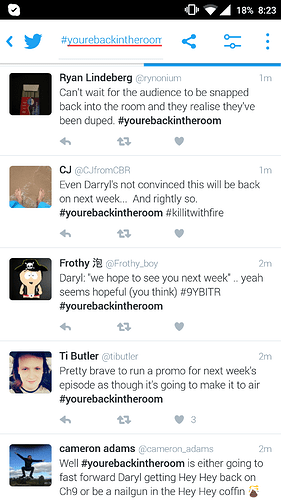 News.com.au article on the show made up of a series or tweets but no review of the show:

‘Worst thing I’ve ever seen on TV’: Viewers slam Daryl’s You’re Back In The Room

I feel sorry for that 1 tweeter who actually found this show funny. The only audience I could see that would find this show even slightly funny or believable would be kids under the age of 12.

The audiences over the top laughing and reactions during the episode had to have been put on. Unless they were hypnotised as well to laugh like that.

This show deserves to flop harder than AGT and Reno Rumble. At the very least it should be moved to Saturday where some young bored kids might tune in.

I daresay that many viewers probably just tuned in last night due to the curiosity factor, I’m expecting a dramatic drop in the ratings next week.

Well, I sure hope so anyway…

I’m probably very much in the minority here but I didn’t find the show all that bad, I had a few laughs here and there.
I just felt that it ran way too long.

Or Channel Nine will commissioning a full series of 26 episodes and will be run the show three nights a week.

Are you really that confident it won’t be going anywhere fast? Most people who watched it hated it. It’s going to have a huge drop off next week.

It shows that the audience is willing to try new things… but I can see this show dropping to 800k next week.