Promos have begun airing for the final season

About time. This should have been screening now. 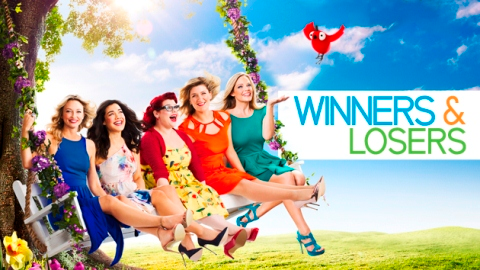 Jenny and Gabe’s windfall is bringing her no peace of mind and when Gabe’s smoking hot new protégé Riley arrives, Jenny fears she’s found the source of her future trouble.

Frances reluctantly makes contact with Keith, the man claiming to be her birth father.

Loved up Sophie and Luke are finally ready to emerge from their new relationship bubble. However, the strength of their relationship is tested when Sophie gets a new job in a local women’s clinic and makes friends with a cheeky barista who’s both outrageously flirty and stubbornly persistent.

Stuck in a dead end call centre job, new girl Riley thinks she’s hit the jackpot when Gabe offers her a role in his start up business.

So will run for 4 weeks then off for the games in Rio!!!

Not necessarily - the week after is just one ep, then it is 2 after that at the moment. So - who knows???

Perhaps they want it finished before the Olympics hence the double episodes. They probably should’ve ended it last season to be honest.

Double episode again next week and probably the week after too.

With Olympics on the way, networks are opting for double eps instead of launching new titles.

I’d say they’ll slot the rest of the episodes into the 9.30 slot following 800 Words after the olympics.

The finale will air next Monday at 8.45pm. I’m assuming it’s a double episode?

Looks like most of the original cast will be back for the finale which is good. A lot of the supporting cast have noticeably been absent this season with little explanation!

The girls struggle with their exes – husbands, fiancés, boyfriends, lives – torn between embracing the future and holding onto the past.

With a fifteen year reunion looming and a documentary investigating what happens to lottery winners five years on, the girls explore just how far they’ve come.

A trip down memory lane shows Jenny she’s at her best when she’s brave and when she and Gabe are presented with one last challenge, Jenny’s forced to consider whether she’s willing to give up and take the safe option or if she’s strong enough to keep fighting for their future.

I watched the finale last night. I’d like to say something positive but really the nicest thing I can say is thank god it’s been euthanized.

The writing let the show down continually, although the second episode was better than the first.

Everytime I watch the show, which is every so often, Sophie is acting like a slut. She deals with problems by screwing. Yeah hun that was okay maybe five years ago but it gets stale after years. I also hated how her character was dealt with in the finale. When the girls were doing the documentary the guy asks them if they are all happy. All say yes when clearly Sophie isn’t and shouldn’t be. She’s still irresponsible, she’s still a skank and she’s exactly in the same position she was in five years ago. She’s had no character growth and all the advice she dispensed to Riley made her seem like the biggest hypocrite ever. She’s acting like she’s mature, together and a wise Mother Earth when it’s all a facade and phony. The writers just handwaved that away and her happily ever after of buying the clinic just felt so forced and tacked on. She didn’t deserve a happy ending.

I always liked Frances the most, which isn’t saying much given her competition, but that storyline of her trying to be mutton and playing with the young cool crowd was beyond sad. I can understand her wanting to let her hair down, but the manner in which she did it felt really awkward and was just lame. Letting a bunch of teenagers rattle her and get under her skin, no thanks. Yet another mature, intelligent successful female character chucked under the bus for some cheap non-existent laughs.

Jenny the high maintenance drama queen fared slightly better. Her character growth felt the most natural of all and her moving away pregnant was a good wrap up.

I did enjoy all the past references and nods to the first episode. It was handled well and there was some nice character interactions. Though it was particularly jarring to see no references to the original fourth girl or Sam. They didn’t even warrant a mention. It was also nice to see the Gross family even if writing them out in the first place made no sense.

All in all it was a decent send off for a pedestrian cliche ridden soap wannabe.

It was Great to see Jack Pearson Reprising his Role of Patrick as well as the Catch Phrase. “Shut Up Patrick!” That Jenny and Bridget give him Everytime he tells Something Stupid.

I was happy with how the final episode went but where was Bec ?She was one of the original 'losers ’ she should have appeared in the final episodes .I agree it was time to end the show but I’m sorry to see it go

I just caught up with the finale as well and I really enjoyed it. They wrapped up the show nicely and it was good to have both some flashbacks and some of the old cast return. It also highlighted to me how great of a support cast W&L used to have and thats when the show was at its peak. This season seemed more focused on just the direct dramas of the main girls. I still enjoyed it but not as good as it was. Demi Harman was a great addition to the cast.

I was happy with how the final episode went but where was Bec ?She was one of the original 'losers ’ she should have appeared in the final episodes .I agree it was time to end the show but I’m sorry to see it go

I guess if the actress didn’t want to take part then there was nothing that they could really do. It would have been nice to see a couple more though like Dot, Doug, Frances sister or Samantha make an appearance as well. Even if 1 or 2 of them just popped up in an episode sonewhere in the lead up to the finale.

It was time to end but still sad to see it go!

Foxtel’s Arena channel is now running W and L starting from Season 1 this week. I can now watch it from the beginning

Yeah I noticed that the other day and watched a little bit. It’s so different in the earlier seasons… so much better with that big supporting cast. It became a very different show by the end.