The highly anticipated 90 minute TV special David Beckham: For The Love Of The Game will air on UKTV on Sunday January 24th at 6.30pm.

“Beckham’s homage to the game was beautiful” - The Independent

“…one of the finest-ever 90 minute displays” - Daily Mail UK

The one-off special aired in the UK last week to critical acclaim and has been hailed as ‘sumptuous’ by The Telegraph.

David Beckham: For the Love of the Game follows the footballing legend as he sets himself the challenge of a lifetime: to play football on all seven continents of the world - including the first ever game played in Antarctica. The special showcases the incredible global appeal of football, joining local communities from all walks of life who play the beautiful game in some of the most challenging, remote and extreme locations on the planet.

Jointly commissioned by the BBC and BBC Worldwide, the special sees David travel to 11 countries in 10 days including to the villages of Papua New Guinea, the foothills of Nepal, the streets of Buenos Aires, the desert plains of Djibouti to the elevated pitches of Miami and frozen wastelands of Antarctica.

The first three games are held in countries for which David is a UNICEF ambassador, he plays with two different tribes in the jungles of Papua New Guinea; children from an earthquake damaged school in Nepal and footballers from three different African countries who live in a refugee camp in the middle of Djibouti’s desert. The next stage sees David fly to Argentina to play with a community youth team from the infamous Boca Juniors deep in urban Buenos Aires. Then, one of the toughest challenges of the trip, a bid to play the first official football match in the surreal and icy landscape of Antarctica.

Exhausting, exhilarating and logistically demanding, David’s challenge is about both his own and the world’s love of the game.

BBC UKTV in Australia will simulcast the concert at 3.55am on Monday 5 June with an encore showing at 8.30pm.

BBC Worldwide ANZ can confirm that a number of Australian and New Zealand broadcasters are on board to show the special concert One Love Manchester, to honour and raise vital funds for the victims and families who were tragically affected by the Manchester attack after Ariana Grande’s show.

Broadcasters who have committed to taking the broadcast and will be able to show it live on the Monday 5 June, or later on the same day, include: Nine and UKTV in Australia; TVNZ and UKTV in New Zealand.

The BBC in the UK is the host broadcaster for international television networks and they will start broadcasting on BBC One from 6.55pm to 10pm on Sunday 4 June, as well as on a host of radio stations. 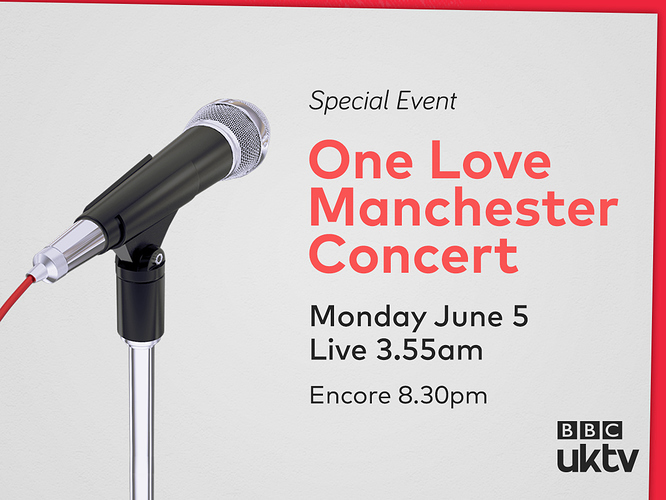 I thought there might be some interest in the layout of Radio Times.

This is for next Thursday. Large amount of space given to “credits”. If they had to pick from the “main channels” I wonder what Australians would watch given this line up. 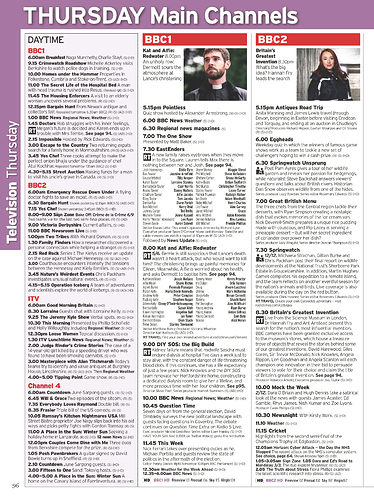 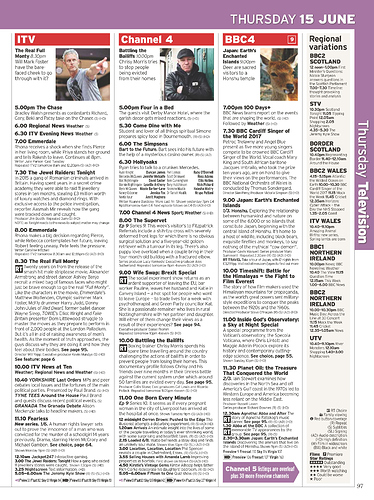 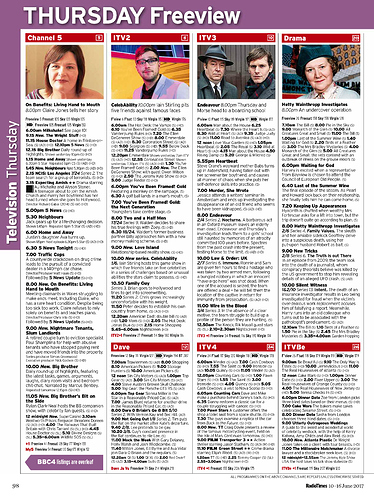 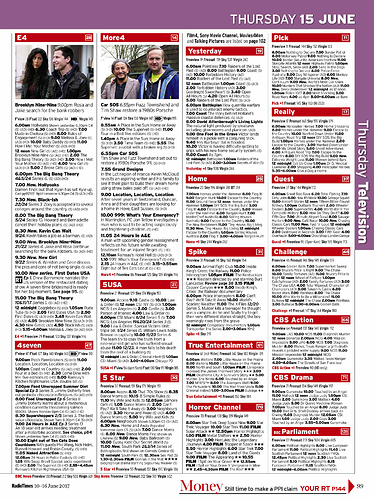 TV Satellite Week does it better.

As the UK soaps have suspended filming, the channels have reduced the number of episodes shown per week in an attempt not to run out of episodes. Most UK soaps only film a few weeks ahead of transmission.

The BBC UKTV channel shows most of these soapies only days after they play in the UK - so I expect they will be reducing the episode count too. Emmerdale is quite a bit behind the UK, so perhaps extra episodes will be shown in the gaps left by the others?

From the calamity of Wallis Simpson to the tragedy of Diana and the triumph of the recent Royal wedding, the story of the House of Windsor is one of constant twists.

Hypothetical is Josh Widdicombe and James Acaster’s new comedy panel show where top comedians are posed increasingly absurd hypothetical situations and scored on how well they would deal with them. Over three rounds, two teams of celebrities must think on their feet as they are faced with a series of wildly fictional scenarios and interrogated on their approach to each one. Josh poses the questions and interrogates the guests’ methods, while James, the arbiter of all Hypotheticals, deals with the guests’ quibbles and queries and doles out the points.

The BAFTA award-winning genealogy show Who Do You Think You Are? returns with another star-studded line-up.The celebrities set to unravel their family history in this four-part series include: Jodie Whittaker, who faces some fraught family history; David Walliams, who uncovers a relative’s traumatic experience during WWI and learns that entertaining runs in the family; Liz Carr, who investigates an ancestor’s role in an attempted murder; and Ruth Jones, who unearths a family connection to the origins of the National Health Service.

The Brit Awards are the most anticipated event in the British music industry’s calendar and this year they will be hosted by Jack Whitehall.

Delta Goodrem made a brief guest appearance via video from her Sydney home.

The 2021 Royal Variety Performance will air on UKTV on Friday December 17.

Join UKTV this June as we celebrate Her Majesty The Queen becoming the first British Monarch to celebrate a Platinum Jubilee with a special line up of programming.

Kirsty Young returns to the BBC for the first time since 2018 to anchor a full weekend of programming for the Jubilee, joined by presenters including Huw Edwards, Clare Balding, AJ Odudu and Roman Kemp , as well as Anita Rani .

It all kicks off on Thursday 2nd June at 7.30pm with Trooping the Colour (Live). The Queen’s Birthday Parade will show the colour being trooped by the 1st Battalion, Irish Guards, and more than 1200 officers and soldiers from the Household Division as they put on a display of military pageantry on Horse Guards Parade, together with hundreds of Army musicians and around 240 horses. This annual event has now marked the official birthday of British Sovereign for over 260 years. Once the parade has ended and the Royal Procession has returned to Buckingham Palace, the Royal Family’s balcony appearance will occur. Huw Edwards, Kirsty Young and JJ Chalmers will present the Jubilee Special from Buckingham Palace

On Friday, in the presence of senior members of the royal family, David Dimbleby , Kirsty Young and Sophie Raworth will host the Service of Thanksgiving from 8.00pm. The National Service of Thanksgiving from St Paul’s Cathedral will acknowledge The Queen’s dedicated service as Monarch. David Dimbleby will provide expert commentary from inside St Paul’s, leading us through the Service. Sophie Raworth meets many of the key people taking part. From the BBC’s Platinum Jubilee Studio at St James’ Park Kirsty Young will be joined by special guests who share their experiences of spending time with The Queen and reflect on how important her faith has been through the years. St Paul’s has played host to several Jubilee Services over the centuries but this will be the first Platinum Jubilee Thanksgiving Service, a historic event that promises to be very special.

On Sunday June 5, hosts Kirsty Young and Roman Kemp will lead live coverage of the Platinum Party at the Palace from 8.30pm. The celebration will see famous faces from the world of entertainment bought together to perform for a night of musical tributes to celebrate the Jubilee. Confirmed performers include Queen + Adam Lambert , Diana Rose , Andrea Bocelli , Alicia Keys , Hans Zimmer and Eurovision runner up Sam Ryder . Plus there will be actors, actresses, athletes and celebrities in attendance including Sir David Attenborough , Emma Radacanu , David Beckham , Dame Julie Andrews and the Royal Ballet . The casts of The Phantom Of The Opera, Hamilton, Six, The Lion King and Joseph and The Amazing Technicolour Dreamcoat will perform during the concert.

Kirsty Young says: “I’m delighted to be back on the BBC for such an historic, unique, and happy event. It’s going to be quite a weekend and our coverage will bring viewers everywhere a front row seat at the celebrations. I can’t wait!” 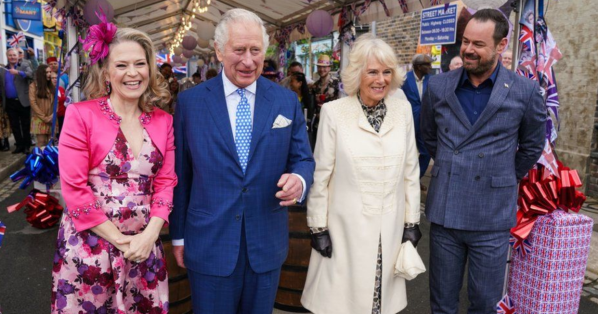 Royal Couple To Guest Star In UK Soap ‘EastEnders’ To Mark The Queen’s...

The Prince of Wales and his wife the Duchess of Cornwall will join the cast of long-running TV soap EastEnders for a street party scene, to mark HM The Queen’s 70 years on the throne. The royal cou…

The episode will be shown on the BBC on June 2. UKTV’s broadcast is roughly one week behind Britain.