Adam Hills, Alex Brooker and Josh Widdicombe show no fear or favour as they tackle the weird and wonderful stories of the UK Election Campaign and answer your #IsItOk questions.

BBC World News and BBC.com has today announced plans for covering the UK General Election 2017. With a focus on the results and what they will mean, the BBC’s international news services will offer the latest news and analysis to ensure our global audiences are kept up to date.

As polling day approaches BBC World News presenters Ros Atkins, Lucy Hockings and Matthew Amroliwala will be on hand to explain the big issues. In the final days of campaigning Ros will be broadcasting from key areas around the UK while Lucy and Matthew will be in London.

As the polls close on Thursday, 8th June, BBC World News will come together with the BBC News Channel, to provide a full results service, which will also be streamed on BBC.com. Internationally respected election anchor David Dimbleby will take viewers through the results stories as they develop. Starting 6.55am (AEST) on Friday 9th June until 3pm (AEST) David will lead a team of BBC reporters and correspondents who will analyse and tally results as they come in, along with commentary from trusted experts, insightful data analysis and state-of-the-art graphics plus interviews with all the major political players.

Once the result becomes clear on Friday 9th June, the BBC World News election team will be in Westminster to gain all the reaction from the seat of government and provide a global perspective.

BBC World News will also be showing the much anticipated Leaders’ Special Question Time programme, live from York, in the north of England at 5.30am (AEST) on Saturday 3rd June. David Dimbleby will be in charge as the Conservative Prime Minister Theresa May and leader of the opposition the Labour Party’s Jeremy Corbyn are grilled by a studio audience of voters. Ros Atkins will be in York to help give context for the World News audience.

The BBC’s digital platforms will also have a role to play in helping people understand the finer points of the campaign and what the result will mean. BBC.com will be streaming the election results programme. Alongside the now-permanent Reality Check team, who are working to unpick election pledges across all parties and make the facts clear, there will be must-read impartial guides and explainers along with the latest result data and news developments all available on demand, online and on mobile.

Plus we’ve been developing bespoke content for our 41 million Facebook page fans and nearly 4 million Instagram followers, such as the BBC Politics Facebook messenger bot which sends followers tailored election news. In addition, the BBC will livestream the election specials on Twitter. This trial interactive experience will offer a real-time curated timeline of tweets allowing followers to see immediate commentary from BBC experts and BBC Reality Check. Follow bbcelection.twitter.com and the hashtags #bbcdebate #bbcqt and #bbcelection. Six weeks ago it was unthinkable, but the British PM's victory is no longer a done deal.

Echoes of Malcolm Turnbull losing ground with his call for an early election?

Saw that ridiculous big splash this morning on SMH. And that’s exactly the sort of response they wanted to elicit from their left-wing readership.

Subtle attack on Turnbull rather than an accurate discussion of the UK election.

Fact is, Labour at the 2015 election were about equal, or even ahead of the Conservatives in many polls before the election. They ended up with approximately 90 less seats.

This time, Labour has been consistently, in the last 2 weeks or so, roughly 5-10 points behind the Conservatives. So just imagine what sort of result that would deliver, if an equal footing in the polls last time gave them a thumping. This is even so factoring in a massive proportion of young people saying they are going to vote Labour and definitely going to vote - last election, however, that stated percentage didn’t actually reflect the reality of the young not bothering to vote.

And even if they do vote the seats with the greatest concentration of younger people are seats which are already safely Labour. So they’re simply stacking votes on in seats they don’t need to win, rather than marginals.

The race has definitely tightened…to say “it is set to backfire” and “is no longer certain” is purely left-wing propaganda peddled by people with no clear understanding of the facts.

GMB promo for the morning after:

Also found this article from BBC Press on the presenting team for their coverage:

This snap election will be the tenth time David Dimbleby leads out the results team. He presented his first election results programme in 1979. He will be joined by Mishal Husain, Emily Maitlis, Jeremy Vine. They will report, analyse and tally results as they come in along with experts and interviews with all the major political players.

The 2017 election team will be joined in the studio by many well-known BBC experts including Political Editor, Laura Kuenssberg and Economics Editor, Kamal Ahmed. It will also have an array of correspondents in key constituency locations to bring the news and results from around the country - including from Scotland, Wales and Northern Ireland - to our audience all through the night.

Huw Edwards will take over in the morning as lead presenter guiding the audience through the day’s main events, including the formation of a new government. He will also present the evening bulletin. Andrew Neil will take over from Mishal Husain.

For context, to put role/program titles to names:

And for radio coverage, BBC World Service will be airing rolling coverage from 7am - 3pm.

From 2100 GMT Philippa Thomas and Tim Franks will be in London analysing the results with a team of experts and senior politicians. Valerie Sanderson is in Scotland where in 2015 there was a seismic result which saw the Scottish Nationalists virtually wipe every other party off the electoral map. And Jackie Leonard will bring you the rest of the news from around the world

For context, to put role/program titles to names:

Good to see Mishal Husain promoted after very successfully moderating the BBC debate, and her credible interview with the Foreign Secretary the other day.

For greater context, all of them, bar Andrew Neil, are raging lefties that are symptomatic of a broadcasting organisation which utterly does not cover politics as reality suggests it should be covered. Another “shock” vote ala 2015 GE or Brexit on the cards, no doubt…

Quite funny, because large portions of the left (especially in Scotland) are accusing the BBC of right wing bias this election.

A couple of weeks ago Laura Kuessenberg got pinged by the BBC Trust for allegedly editing an interview with Jeremy Cornyn in an inappropriate way.

Not saying you’re wrong, but that it’s interesting from what I’ve seen of both sides, that the BBC has been accused of bias in favour of both Labour and the Conservatives.

Quite funny, because large portions of the left (especially in Scotland) are accusing the BBC of right wing bias this election.

Not saying you’re wrong, but that it’s interesting from what I’ve seen of both sides, that the BBC has been accused of bias in favour of both Labour and the Conservatives.

Yes, that’s true. But, a revision to your statement: the far left accuse the BBC of right wing bias, in the same way they view Blairite Labour as right wing. That shouldn’t be balanced with the right, fairly, noting that the BBC has an institutionalised left wing bias.

On SKY News Live Channel 601 coverage begins at 5:00am with First Edition, including Live to London at 7:00am as the polls close and the first of the Exit Polls are released.

Chief Political Reporter Kieran Gilbert hosts a special edition of AM Agenda before we take viewers back to London Live for coverage as the votes are counted and the winners and losers emerge.

From 4pm Janine Perrett hosts UK Votes with analysis on what the result means for Australia before Samantha Maiden wraps the day with The Latest at 6pm.

Sky Business (602) coverage will only run until 9.30am tomorrow before it switches to the main channel (601) for the rest of the day.

ABC election expert Antony Green is in London to provide analysis for the broadcaster’s various radio and TV coverage.

And it’s hung, if exit polls are anything to go by. 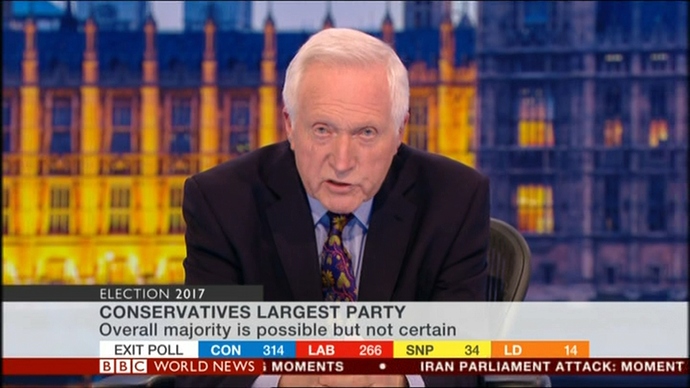 Corbyn seizing the memes of production I see

Some graphics and set 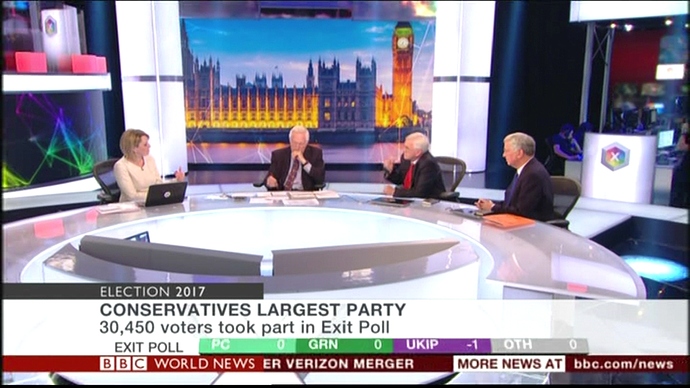 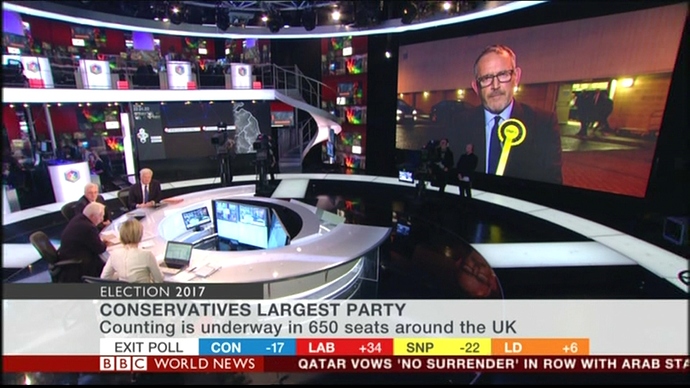 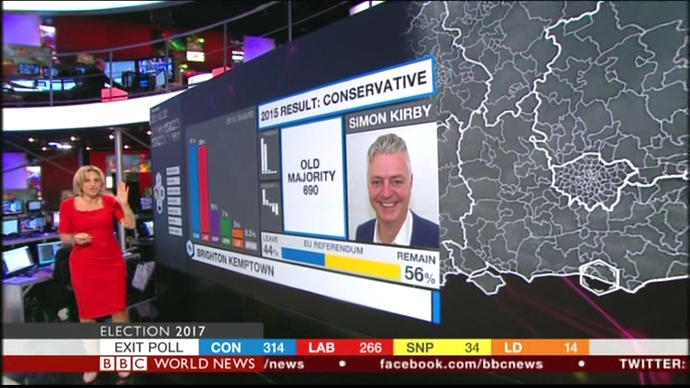 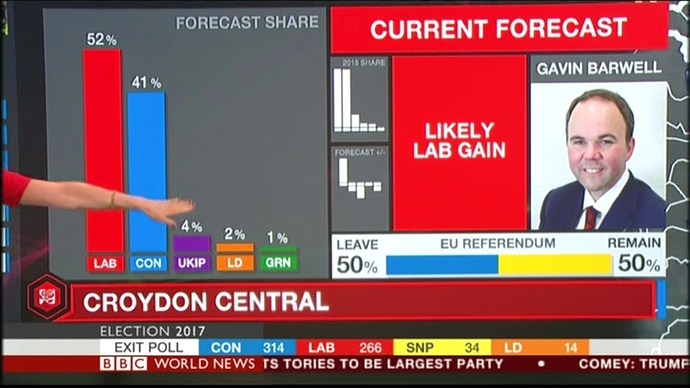 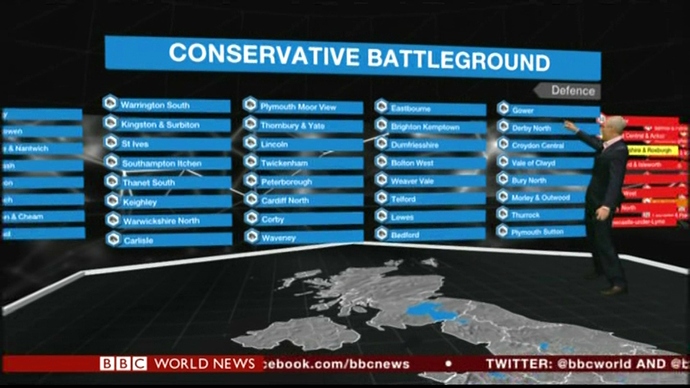 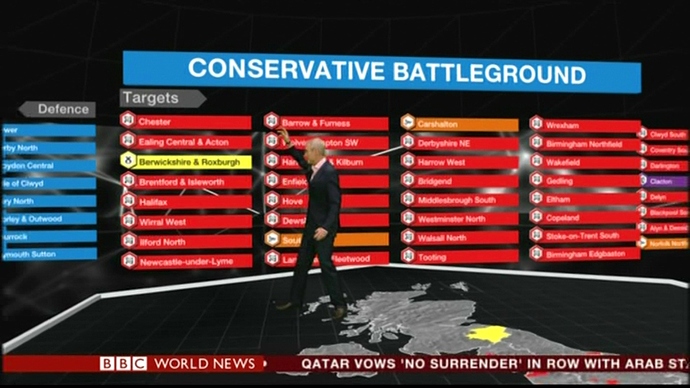 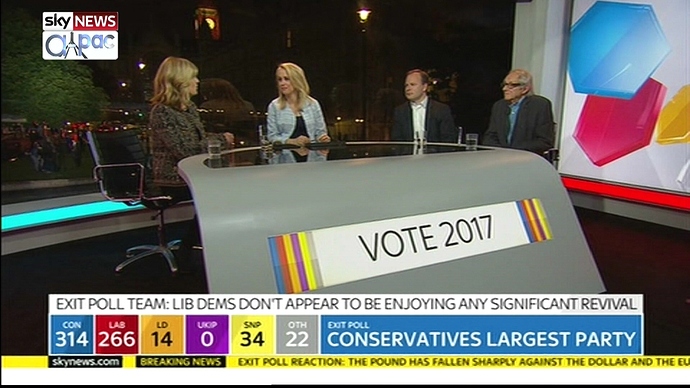 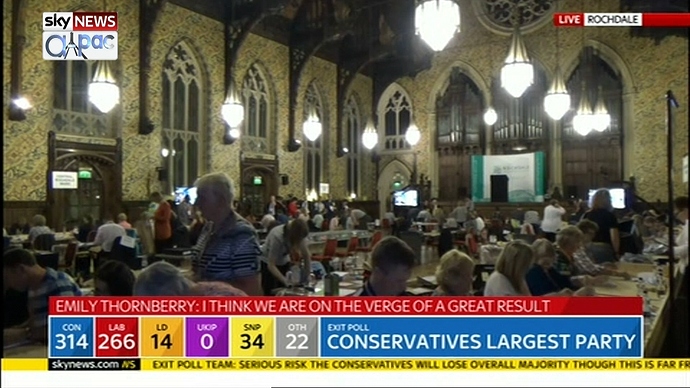 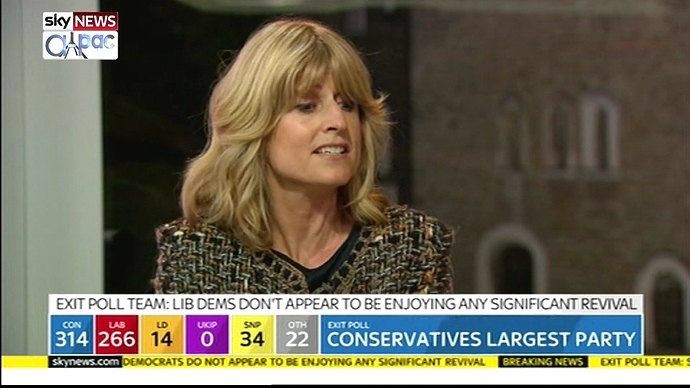 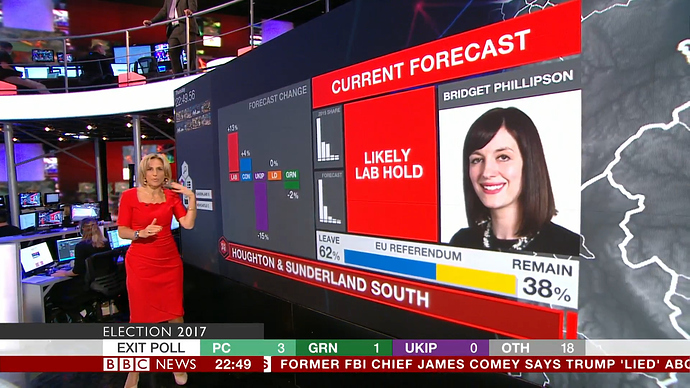 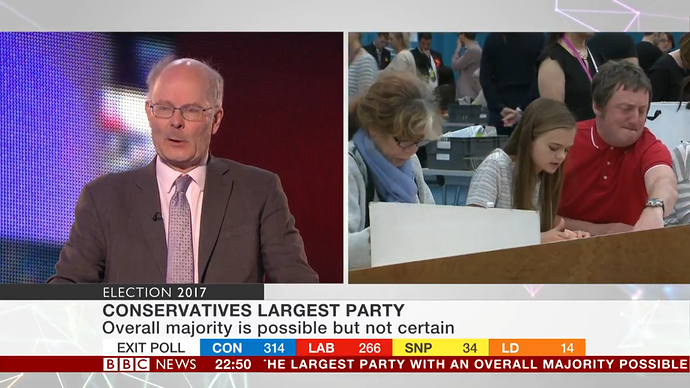 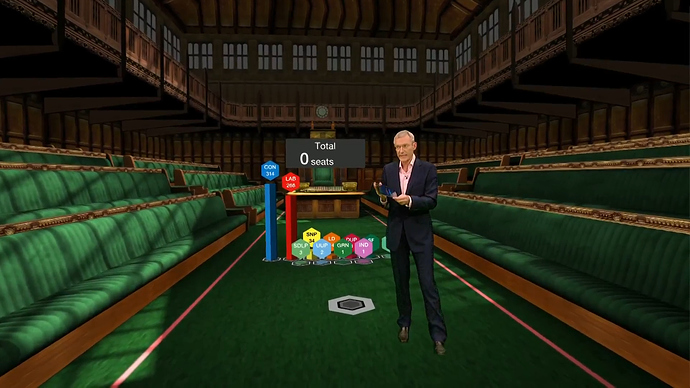 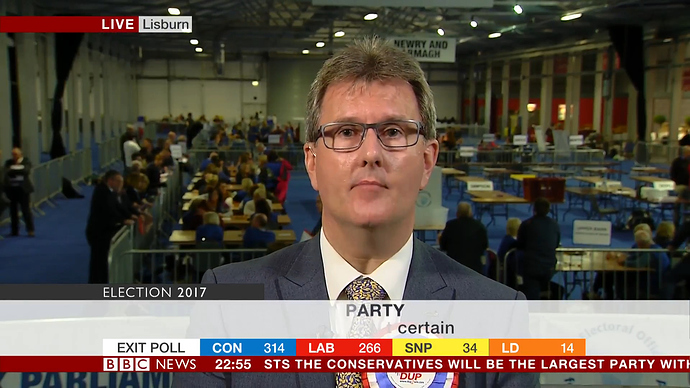 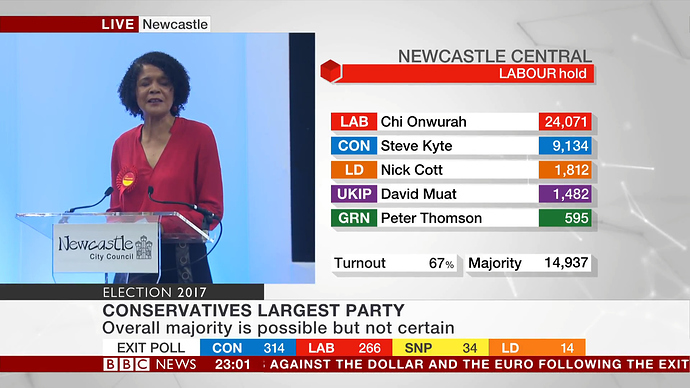 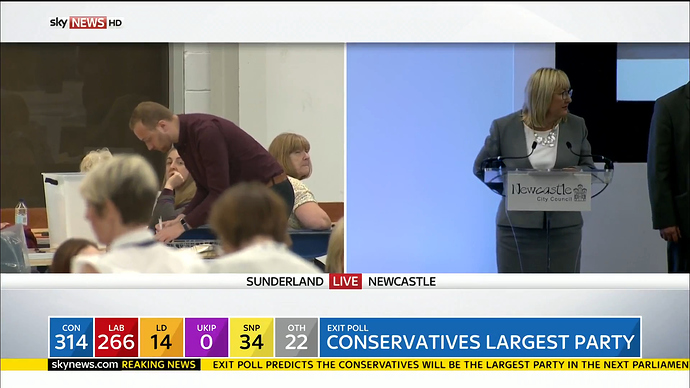 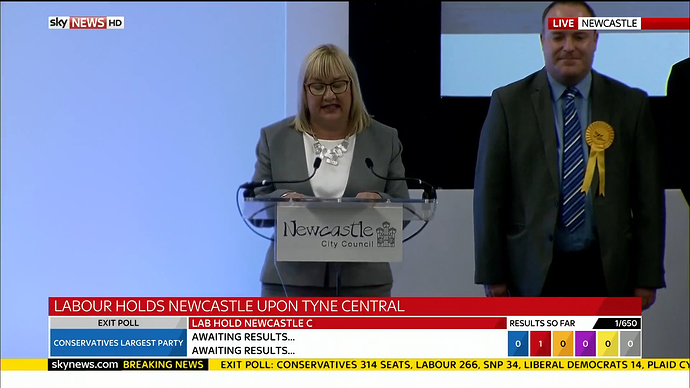 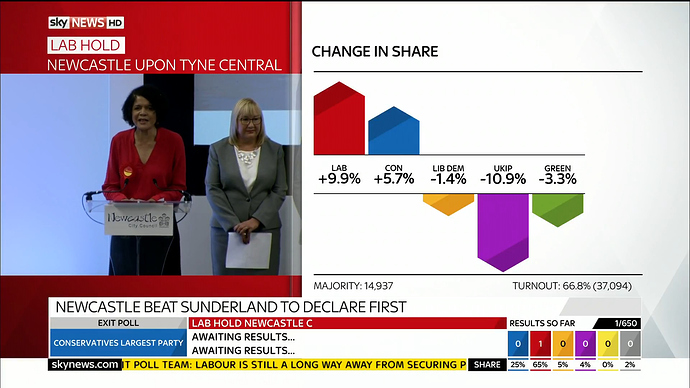