Following the mass shooting at Marjory Stoneman Douglas High School in Parkland, Florida the debate over guns has become much more heated than after previous school shootings.

What do you think will happen? How should Americans handle this problem? Has this issue reached a turning point?

I personally feel it is very different this time with regard to the student activism from the high school after the shooting.

I been watching this on and off, I do agree that there is something different about this time. But this time this is on the FBI for missing some vital clues that everyone saw about this shooter. I don’t think we’ll see an outright change on any gun laws that will harm the second amendment rights.

People should have guns for protection, if they chose to. No one’s going to argue taking those away.opinion

I would like to see both sides come to a discussion. Republican gun owners, Democratic gun owners, both parties. Come together and look at tightening the gun laws around ownership - e.g Mentally ill patients, the laws should have been kept that Obama had posed. Why they got rid of that is just beyond me! Honestly stupid. Definitely raise the age limit for gun ownership to be at least 21 (is it 18 or 19?). Banning assault weapons from consumer use and buying in shops would be a great start too…

Fuck knows what’s going to happen…though. We see time and time this debate come up, but I have a feeling all of America is going to do fuck all.

I think the businesses that have been boycotting NRA is just over the top reaction, and there is no need for it to be honest.

I reckon in time they will take guns away and there might not be the 2nd amendment. However, if the 2nd amendment still remains, there will be a lot of gun restriction. There are Americans out there believe that their 2nd amendment is a right to have. I think its 18 for assault weapons.

Just like how Prohibition was ended by repealing a constitutional amendment, I’m sure the 2nd amendment can be repealed if there really was a push to get it done. However, I don’t think it will ever happen.

I think the USA cannot have a wholesale ban on guns for self defence due to the relatively high rate of violent crime over there, and number of guns circulating in the country among the general public. I think the gun ownership age should remain at 18 (why should an adult not be able to enjoy the same privileges as someone else? same thing with the drinking age, too).

Australia is a totally different story. Guns have been relatively tightly controlled ever since the colonial days. Handguns have always been tightly controlled and so the only form of arms that people could use for legitimate self defence purposes were shotguns and rifles. As a result, having a gun for self defence never really entered ubiquity apart from on rural properties. The gun laws here work only because guns did not proliferate anywhere near as much among the general public as they do in the USA, and the vast majority of criminals cannot easily source a concealable firearm.

What I think should happen over in the USA is a total restriction on the sale of semi-automatic firearms which hold more than 6 rounds in the magazine. People should be allowed to own firearms, but only if they are appropriately licensed and the guns registered - like you would with a car.

I think there is some merit to permitting people in the USA to carry concealed firearms for self defence in more places than are currently permitted. I think in the case of schools, teachers should be allowed (not forced) to carry their own handgun on their person just in case a school shooting does break out.

The perception I have is that a lot of gun nuts in the United States are of the belief that they need to own a huge arsenal of weapons in case they deem that it is appropriate to instigate an uprising against a tyrannical government, which is just absolute insanity in this day and age.

the second amendment was originally meant for retaliation of the govt. (if the people weren’t happy with them, they would stage an uprising of sort). If there is a change, it’ll be later rather than sooner - if a mass shooting of kids won’t make them ban shit, there won’t be much that will. their obsession with arms is somewhat bizarre and they love to talk about freedom, ironically, the UK, NZ, Canada and Aus all being economically freer than the USA (sits at 18 of 186).

It’ll be very interesting to see where this goes.

My question is could a good human rights lawyer take the case on a sue the governement? Is it not a human right for children to be entitled to education in a safe environment? Currently that is not being achieved as these mass shootings are occurring in schools.

I don’t think they can at all. As a gun is a part of the US constitution. They could put safety measures in place to prevent it from happening.

I don’t think they can at all. As a gun is a part of the US constitution. They could put safety measures in place to prevent it from happening.

They could take it to the Human Rights court…

Is it not a human right for children to be entitled to education in a safe environment?

Nope, that’s not in the constitution. A right to bear arms is though.

I’m not talking about the constitution. I’m talking about the European Human Rights Conventions. Which is something the US has signed. I dont know if a good lawyer could win but the coverage alone would be embarassing on the US government which is not protecting children’s safety or rights.

Why would the USA be part of a European Human Rights convention (which they’re not)?

Why would the USA be part of a European Human Rights convention (which they’re not)?

The US have signed internation treaties which deal with human rights and could take issues to the high court in the US.

Yeah, that’s not likely to happen. First off, the US has not signed any treaty which says “children are entitled to education in a safe environment”. They haven’t even ratified the UN Convention on the Rights of the Child.

Second, even if they DID sign a treaty which explicitly states “children are entitled to education in a safe environment”, whatever court is responsible would be extremely unlikely to take any form of action because when you look at the statistics, schools in the US are quite safe with 1 student homicide for every 2.8 million students enrolled. 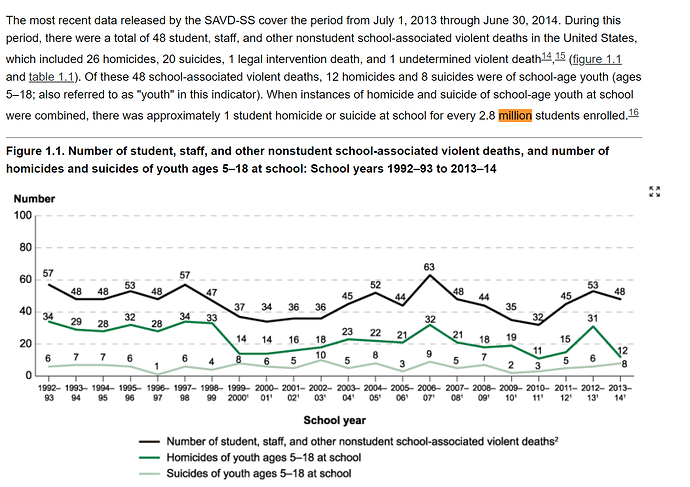 And the number of children being murdered while at school is basically nothing compared to them being murdered outside of school (1,053), even though these kids spend a quarter of their lives at school.

And these child homicide statistics are nothing compared to the figures for child deaths caused by accidents and other mishaps, with 12,000 accidental child deaths in 2008.

I am not suggesting that it’s not worth trying to reduce the number of mass shootings in schools by wide-ranging gun controls, but I am saying that this is how those who oppose any changes to gun laws will frame their argument in courts.

I agree with what you are saying but you see movements such as black lives matter and me too making such big impacts in politics leading to changing laws. The same can happen here if someone gets behind it.

Can we just annex the US and get rid of their idiots? Starting with the orangutan masquerading as their president with the dead cat on his head.

Also - giving teachers guns for protection…as a teacher, that has got to be one of the dumbest f**king ideas I have ever heard. Imagine some of the unhinged teachers…or teachers having a really crappy day with an class going off their nanas. That will end badly.

Should be interesting #ThisIsOurLane campain has really taken off.