Tomorrow When the War Began

###Tomorrow When the War Began 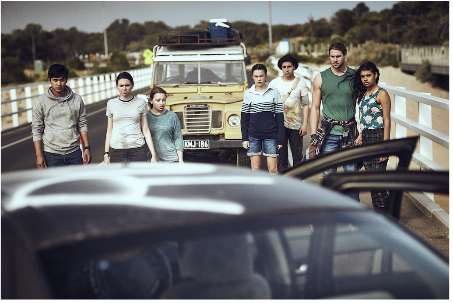 The highly anticipated television series Tomorrow When the War Began is set to delight families, and fans of the John Marsden novels, when it premieres next month on ABC3.

The six-part adventure series tells the story of a group of young Australian friends who find themselves in the midst of a hostile takeover by a newly forced Asian Coalition. The unsuspecting Australian military is quickly overwhelmed and none of Australia’s allies, including the U.S., are immediately willing to risk possible nuclear war to come to her aid.

The teenagers must overcome seemingly insurmountable odds and discover that in order to save the things they hold most precious, they must be prepared to sacrifice everything.

The producers and various cast members are currently available for interviews. Please contact me should you wish to take up this opportunity. Official media kit attached.

An Ambience Entertainment Production in association with ABC3, Screen Australia and Film Victoria. Based on the novels by John Marsden. Producers: Michael Boughen and Tony Winley. Executive Producers: Matthew Street and Kim Vecera.

Looks good but what a crazy timeslot. Are kids and teens going to be home at 7.30pm on a Saturday night to watch this?

It must not be very good then.

I just think they pick bad timeslots for their first run drama.

The last couple of series were screened on Monday at 6.25 which pit it them up against first run drama Neighbours on Eleven at 6.30pm.

About the only thing I’d ever watch on ABC3.

Not a bad timeslot IMO - there’s no consistent competition in that timeslot.

It’s a shame they never continued the film series but I suppose this is the next best outcome for fans of the books.