Todd Sampson’s Life on the Line

###Todd Sampson’s Life on the Line 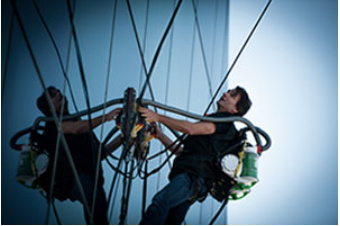 Todd Sampson puts his faith in science to the ultimate test in a series of epic experiments, trusting his life to the Laws of Physics. The Laws of Physics govern all life on this planet. They are one of the few things in life that are universal, immutable and predictable. We rarely think about them yet they impact everything we do.

In this series Todd explores the fascinating world of physics, embarking on a series of challenges to reveal these powerful forces. With the help of some of Australia’s leading young physicists, along with a first-class construction and safety team, each episode follows Todd’s journey from the kernel of an idea through to a daring experiment that will show Physics in action on an incredible scale. These bold experiments are at the mercy of weather conditions, human error, mechanical failure, and Todd’s own willpower. Yet the science they are based on remains absolute.

But it’s one thing to believe in the science, and another thing to bet your life on it.

Filmed in Melbourne, Sydney, Bankstown, Cockatoo Island, Kangaroo Valley and New Zealand, Todd Sampson’s Life on the Line is a visually poetic and stunning documentary series that reveals the invisible forces in the world around us.

Runs for: Six x 30min episodes on ABC and iview

Isn’t this similar to his documentary for Ten last year, Body Hack?

Episode 1 - Todd goes feet first into an inferno with only a dousing of water to protect him.

Episode 2 - With help from Olympic swimmer and physics student Cameron McEvoy, Todd explores the science of resistance by submerging one of the world’s deadliest weapons – an AK-47 rifle - fired at him at a distance of only three metres away.

All his shows are similar. I really enjoyed the Redesign My Brain series he did for ABC but didn’t enjoy Body Hack quite as much so I’m glad he’s gone back to the ABC for this series.