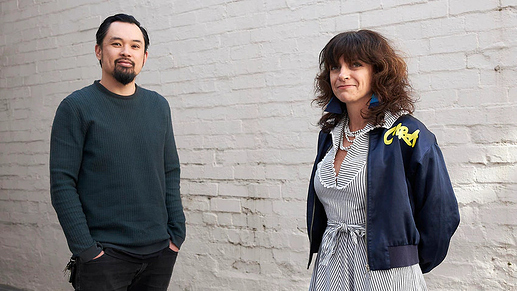 Produced by Aquarius Films for SBS and About Premium Content, with major production investment from Screen Australia in association with Screen NSW, the four-part heist caper is a fun, yet gripping story about female friendship and a celebration of Filipino culture and community.

Set in Sydney’s glamorous Eastern suburbs, this tale of female empowerment will be led by a female cast – to be announced in coming weeks - and produced by award-winning filmmaking duo Angie Fielder and Polly Staniford (whose recent credits include Lion , nominated for six Academy Awards® and four Golden Globe Awards as well as Berlin Syndrome, Dirt Music, The Other Guy and The Unlisted ).

No one is safe from suspicion, from social darling Sara Beasley, whose ‘perfect’ life is crumbling fast, to her long-suffering nanny, Evie De La Rosa, a godmother of sorts for other Filipino domestic workers. With the stakes higher than ever, can they stop themselves from turning on each other, or will they discover a friendship worth more than diamonds?

Best known for his short films, music videos and commercials, The Unusual Suspects marks Montalban’s television directorial debut alongside Bailey, whose career spans 25 years both as a performer and behind the lens.

Melvin Montalban said: “To be working and learning under experienced helmer Natalie Bailey is a wonderful opportunity. And, as a Filipino-Australian, to direct a largely Filipino cast is an equally exciting prospect. I can’t wait for the opportunity to share the experience of Filipino domestic workers in a heartfelt and genre-bending way.”

Natalie Bailey said: “I’m thrilled to be working back in Australia with Aquarius and SBS, the most forward-thinking channel in Australia. It is a rare opportunity to direct a female-centred series, let alone one with such a dynamic heist at its core. The Unusual Suspects explores the bonds of female friendship and experience while cutting to the heart of some of Australia’s ethical blind spots - wealth disparity and the exploitation of immigrant workers.”

Producers, Angie Fielder and Polly Staniford, said: “ The Unusual Suspects is a female friendship story about a group of women from different walks of life wrapped up in a wildly entertaining heist caper with an important message at its heart. This is Aquarius’ first collaboration with SBS and we are extremely excited to be moving into the production phase with such a strong creative team.”

SBS Director of Television and Online Content, Marshall Heald, said: “ The Unusual Suspects uses the hook of a heist genre to unpack the complex relationships between a diverse group of women. SBS has a proud history of producing original and exceptional drama and this latest chapter marks our first foray into dramedy. The talented creative collective behind this exciting new commission will ensure The Unusual Suspects entertains and enthrals whilst telling a story that explores a different facet of the Australian multicultural experience with female friendship at its core.”

The Unusual Suspects is an Aquarius Films production for SBS with major production investment from Screen Australia in association with Screen NSW. The series is financed with support from Cutting Edge. International distribution managed by About Premium Content. 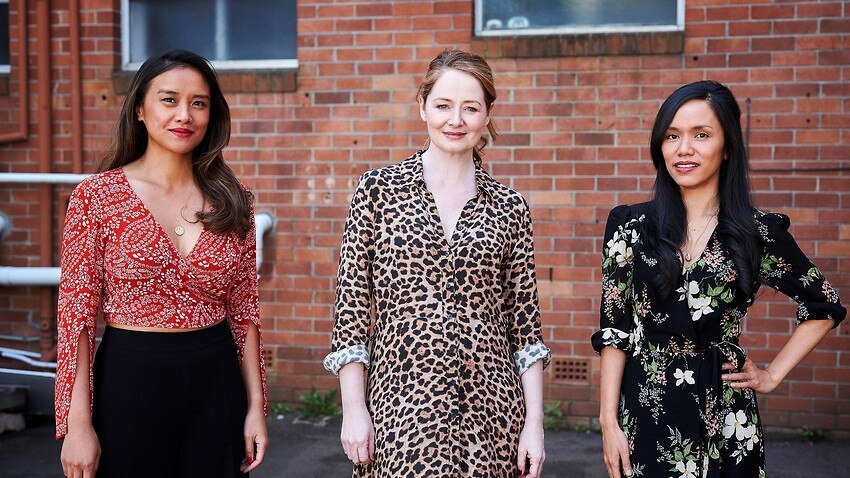 Produced by Aquarius Films, the fun yet gripping four-part heist caper is a tale of female friendship and empowerment set in Sydney’s glamorous Eastern Suburbs. When a $10 million necklace is taken in an elaborate heist, women from vastly different walks of life come together to ensure justice is served.

SBS is committed to exploring the diversity of contemporary Australia by providing a nuanced representation of underrepresented communities through its content. The Unusual Suspects champions strong female characters and marks the first major representation of Filipino-Australians on Australian TV.

Aina Dumlao said: “Having the opportunity to work with Filipinos both in-front-of and behind-the-camera - all while collaborating alongside a powerhouse cast and amazing filmmakers - is nothing short of pure joy for me. And the fact that The Unusual Suspects is also telling the story of my own family’s struggles, in addition to countless other overseas workers, just humbles me. It’s refreshing to see so many well-drawn female roles with depth and complexity in the one production and we look forward to bringing these amazing women to life.”

Michelle Vergara Moore said: “Myinspirational parents, José and Rustica, immigrated from Pulilan, Philippines to Australia in 1975 with the dream of a wonderful new life for them and their 10 children. Today, over 290,000[[1]](file:///C:/Users/clairel/AppData/Local/Microsoft/Windows/INetCache/Content.Outlook/SY8ORIX5/Media%20Release%20-%20Powerhouse%20female%20trio%20spearhead%20new%20SBS%20drama%20comedy%20The%20Unusual%20Suspects.docx#_ftn1) Filipino-born people also call Australia home. I hope I can do them, my parents and other Filipino immigrants proud with this empowering and captivating fire-cracker of a series. In my lifetime, I never imagined that a series depicting such an important part of the Filipino-Australian immigrant experience would be portrayed…and to be a part of it - I’m just chuffed! Kudos to the entire team for believing that this narrative needs to be shared, and I can’t wait for this highly-entertaining story to resonate with audiences around the world.”

Miranda Otto said: “I’m excited to return to Sydney to join Aina and Michelle in this outrageously funny series with fierce female friendships at its core. I’m honoured to be working with Aina, Michelle, Vonne Patiag, Melvin Montalban and the other Filipino creatives to tell a truly original and incredibly diverse narrative and look forward to collaborating with SBS, who do such amazing work telling Australian stories.”

The series is being produced by award-winning filmmaking duo Angie Fielder and Polly Staniford ,whose recent credits include Lion , nominated for six Academy Awards® and four Golden Globe Awards as well as Berlin Syndrome, Dirt Music, The Other Guy and The Unlisted . They are joined by Vonne Patiag ( Halal Gurls ) as Associate Producer.

The series is written by Jessica Redenbach ( Spirited, Rush ), Roger Monk ( Nowhere Boys, The Secret Life of Us ) and Vonne Patiag , with Margarett Cortez as Script Consultant. In the directors’ chairs are Emmy Award-winning Natalie Bailey ( Retrograde, Run, Avenue 5, The Thick of It ) and Melvin Montalban (Rope Burn, Cupid). Executive Produced by SBS’s Acting Head of Scripted Amanda Duthie .

Update 28/10/2020 The Unusual Suspects from Aquarius Films is filming in Sydney.

Some interesting casting choices there with married couples and families.

this is right up my alley. as my mother to be is Filipino I love anything to do with the country and its people:D

All episodes available to stream at the same time of the premiere. 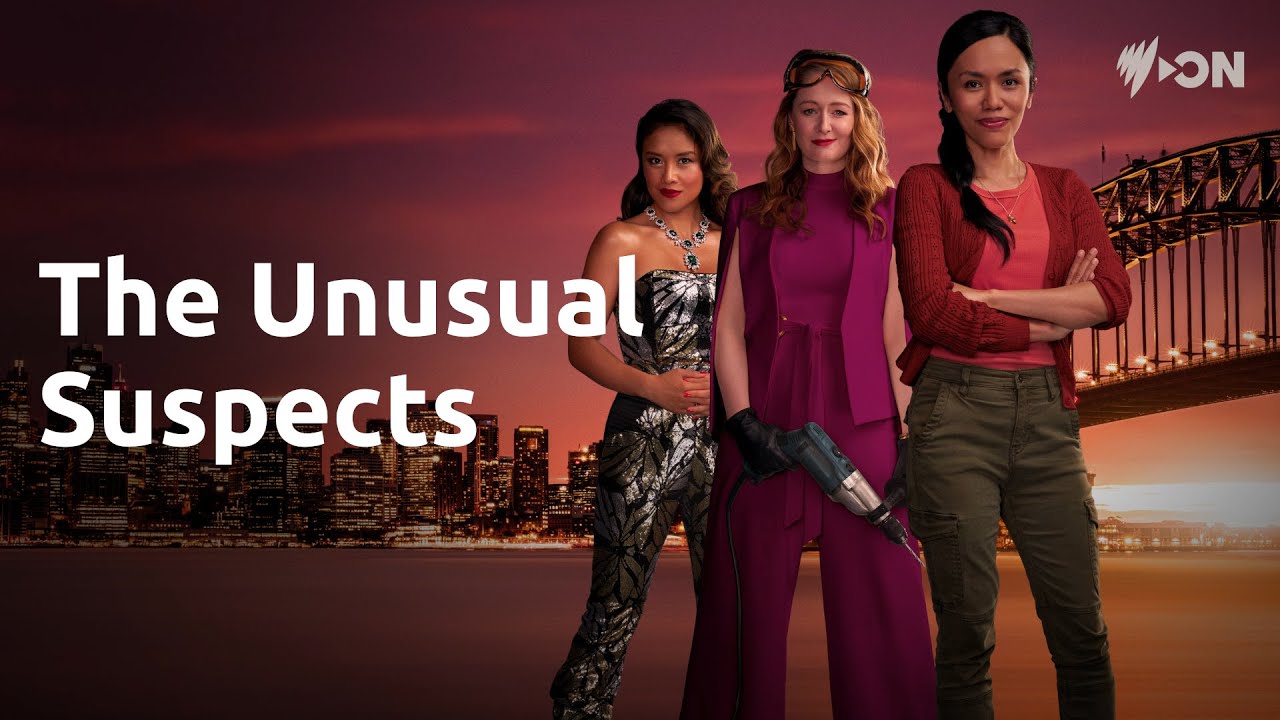 Warm, funny and utterly gripping, The Unusual Suspects is a compelling heist caper about female friendship and empowerment. Filmed and set in Sydney’s glamourous Eastern Suburbs, this four-part drama series event fromAquarius Filmsstarts Thursday June 3 at 8:30pm on SBS and SBS On Demand , with all episodes available to stream at the same time of the premiere.

When a $16 million necklace is taken from self-made businesswoman Roxanne Waters’ ( Michelle Vergara Moore ) home in an elaborate heist, the ensuing police investigation exposes cracks in Eastern Sydney’s sparkling façade. With the stakes higher than ever, can the masterminds stop themselves from turning on each other, or will they discover a friendship worth more than diamonds?

Both entertaining and enthralling, the series uses the hook of the heist genre to unpack the complex relationships between a diverse group of women. The Unusual Suspects marks the first major representation of Filipino-Australians on Australian television and continues SBS’s legacy of delivering exceptional drama exploring the rich diversity of Australia in an authentic and nuanced way.

The show’s trailer is also available on C21 website for overseas media buyers. 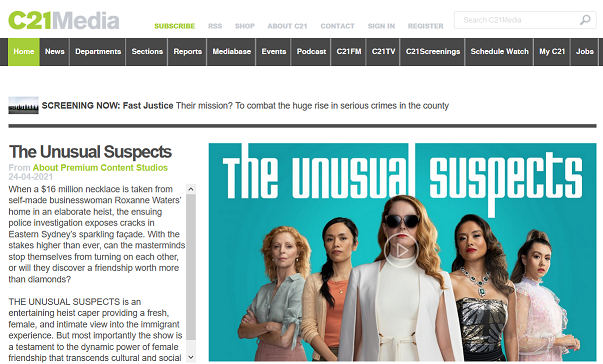 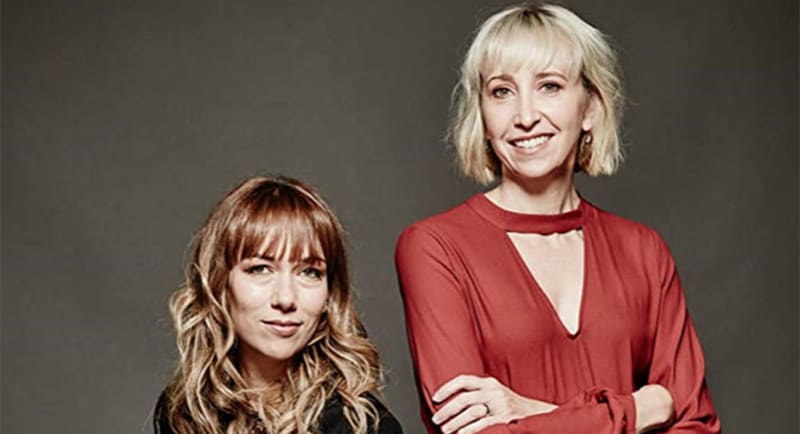 How SBS's The Unusual Suspects brought a jewellery heist to life

Premiering today on SBS and SBS On Demand, The Unusual Suspects is a story about friendship, scheming, and very expensive jewellery.

I quite enjoyed and especially liked the ending, which i won’t spoil.

I think the ratings might have suffered because they had four of the seven leading ladies who were Filipinas. If I was making that show, I would have made Roxanne an Australian born Filipina, like the actress Michelle Vergara Moore is herself.

I just think could have worked better bridging the divide between the Aussies and the Filipinas and having less of it in another language requiring subtitles. Considering people from the Philippines are so fluent in English, this is one show which could have had more English and it wouldn’t have seemed out of place.

UPDATE 27/8: the series has since been sold to Bell Media in Canada, NZ streaming service Rialto, OCS in France, Filmin in Spain, AMC Networks International Southern Europe in Spain and Portugal, and online platforms Streamz and Proximus in Belgium.